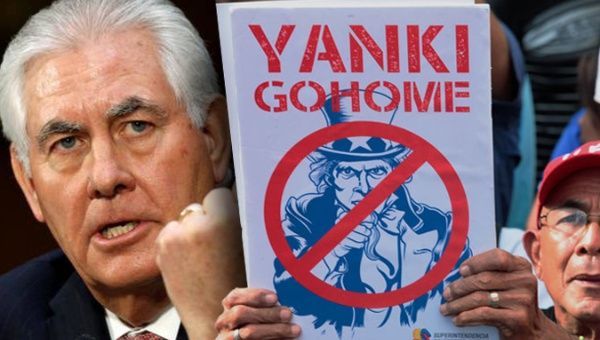 Washington has made one of its most foreboding threats so far against the Bolivarian Republic of Venezuela, as Secretary of State Rex Tillerson openly floated the possibility of stepping up “regime change” measures against the government of democratically-elected President Nicolas Maduro.

“Our approach to Venezuela has been to try to work through coalition partners, through the OAS as well as others who share our view of Venezuela’s future … Clearly what we want to see is for Venezuela to return to its constitution, return to its scheduled elections, and allow the people of Venezuela to have the voice in their government they deserve,” Tillerson told members of the press.

“We are evaluating all of our policy options as to what can we do to create a change of conditions where either Maduro decides he doesn’t have a future and wants to leave of his own accord or we can return the government processes back to their constitution,” the former Exxon Mobil chief executive added.

While the U.S. top diplomat cited the Organization of American States as a “coalition partner” in anti-Venezuelan efforts, the regional body’s charter explicitly disallows the interventionist measures wielded against Caracas by Washington.

Article 19 of the OAS charter clearly prohibits any state having “the right to intervene, directly or indirectly, for any reason whatever, in the internal or external affairs of any other State,” while Article 20 notes that “No State may use or encourage the use of coercive measures of an economic or political character in order to force the sovereign will of another State and obtain from it advantages of any kind.”

Tillerson’s comments come in the aftermath of unilateral sanctions imposed on Maduro on Monday. As with last week’s round of sanctions against 13 high-level government officials, all of Maduro’s assets subject to U.S. jurisdiction are now frozen and people from the U.S. are prohibited from dealing with the president.

“Such sanctions have always been of dubious legitimacy and legality, to put it mildly,” wrote Mark Weisbrot, co-director of the Center for Economic and Policy Research in Washington, D.C, in a column for The Hill.

“Under U.S. law, the president’s executive order has to state an obvious falsehood, that there is ‘a national emergency with respect to the unusual and extraordinary threat to the national security’ of the United States caused by Venezuela,” Weisbrot continued. “And the sanctions clearly violate the Charter of the Organization of American States (Chapter 4, Article 19), as well as other international treaties to which the U.S. is a signatory.”

The U.S.’s junior partners in the governments of Panama and Mexico’s unpopular Peña Nieto administration have pledged to assist the sanctions efforts, which President Maduro has described as an “imperialist attack” against the country.

“Why are they sanctioning me? Because I called democratic elections so that people can freely vote for the National Constituent Assembly,” he said. “I feel proud to be sanctioned, Mister Imperialist Donald Trump.”

Over 8 million people voted in Venezuela’s Constituent Assembly election Sunday — a turnout of over 41 percent of the electorate, according to electoral authorities — to choose the 545 members of the legislative superbody from among 6,120 candidates, in a mass display of support for a peaceful resolution to the crisis.