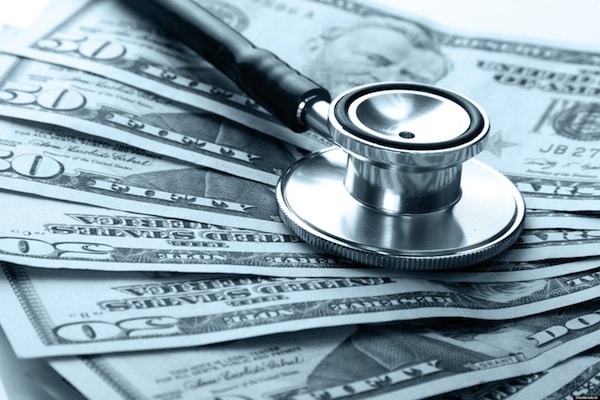 The US is one of the only advanced capitalist countries without a system of universal health coverage. Tens of millions are uninsured, and many millions more pay for insurance that is either too limited in its coverage or too expensive to use. What we need, and could implement if political realities change, is a “Medicare for all,” single-payer system of national health insurance.

As the organization Physicians for a National Health Program explains:

Single-payer national health insurance, also known as “Medicare for all,” is a system in which a single public or quasi-public agency organizes health care financing, but the delivery of care remains largely in private hands. Under a single-payer system, all residents of the U.S. would be covered for all medically necessary services, including doctor, hospital, preventive, long-term care, mental health, reproductive health care, dental, vision, prescription drug and medical supply costs.

The program would be funded by the savings obtained from replacing today’s inefficient, profit-oriented, multiple insurance payers with a single streamlined, nonprofit, public payer, and by modest new taxes based on ability to pay. Premiums would disappear; 95 percent of all households would save money. Patients would no longer face financial barriers to care such as co-pays and deductibles, and would regain free choice of doctor and hospital. Doctors would regain autonomy over patient care.

Our health care system fails to deliver affordable, accessible, quality health care. Even a writer for Forbes magazine, a publication that proclaims itself to be a “capitalist tool,”acknowledges this:

It’s fairly well accepted that the U.S. is the most expensive healthcare system in the world, but many continue to falsely assume that we pay more for healthcare because we get better health (or better health outcomes). The evidence, however, clearly doesn’t support that view.

For example, take a look at the exhibit below, which comes from a 2014 Commonwealth Fund study on health care in the eleven listed nations. 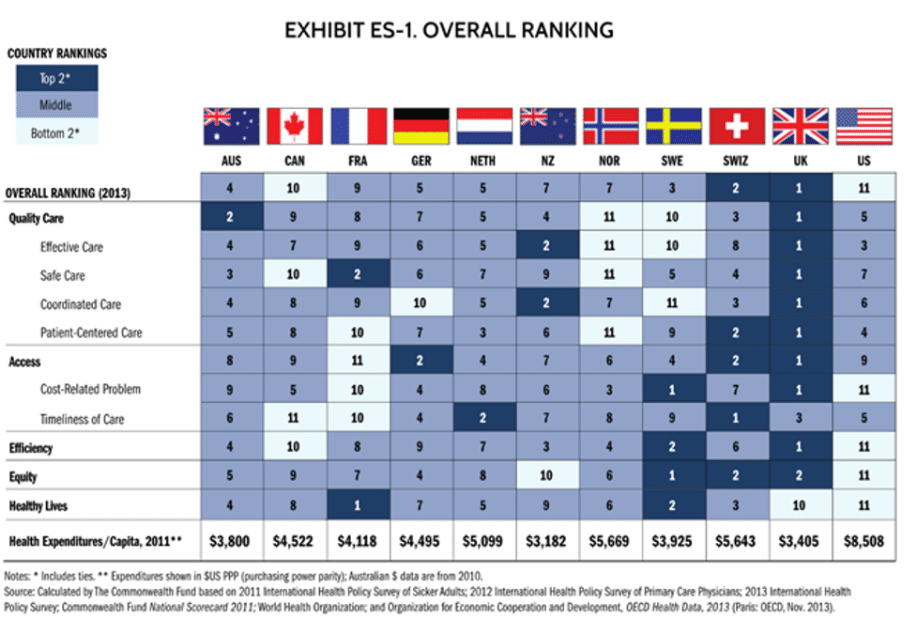 As you can see, the US ranked last in the overall ranking, thanks to its relative poor performance in the category of access and last place standing in the categories of efficiency, equity, and healthy lives.

The Forbes article summarizes the reasons given by the Commonwealth Fund for the poor US performance:

Access: Not surprisingly — given the absence of universal coverage — people in the U.S. go without needed health care because of cost more often than people do in the other countries.

Efficiency: On indicators of efficiency, the U.S. ranks last among the 11 countries, with the U.K. and Sweden ranking first and second, respectively. The U.S. has poor performance on measures of national health expenditures and administrative costs as well as on measures of administrative hassles, avoidable emergency room use, and duplicative medical testing.

Equity: The U.S. ranks a clear last on measures of equity. Americans with below-average incomes were much more likely than their counterparts in other countries to report not visiting a physician when sick; not getting a recommended test, treatment, or follow-up care; or not filling a prescription or skipping doses when needed because of costs. On each of these indicators, one-third or more lower-income adults in the U.S. said they went without needed care because of costs in the past year.

What accounts for this outlier status in health care? According to the report:

The most notable way the U.S. differs from other industrialized countries is the absence of universal health insurance coverage. Other nations ensure the accessibility of care through universal health systems and through better ties between patients and the physician practices that serve as their medical homes.

A Guardian article on the US health care system provides further confirmation of US outlier status:

Broadly speaking, the World Health Organization (WHO) defines universal health coverage as a system where everyone has access to quality health services and is protected against financial risk incurred while accessing care. . . . Among the 35 OECD member countries, 32 have now introduced universal healthcare legislation that resembles the WHO criteria.

And yet we pay the most

The graphic below, from the Guardian article, provides a stark picture of just how much we pay to get our poor health care outcomes. 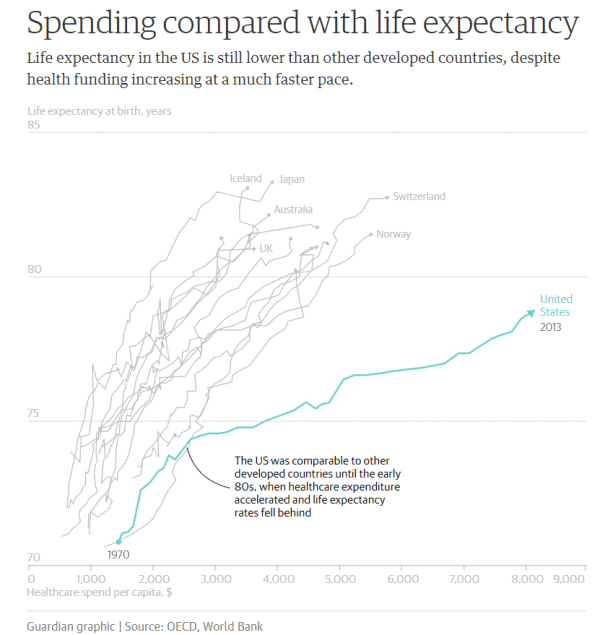 Significantly, it was in the early 1980s that our per capita health care spending began to soar compared with all other developed capitalist countries, a period marked by the government’s growing embrace of pro-market, neoliberal policies designed to promote corporate profitability. And as the graphic also makes clear, we have seen limited gains in life expectancy despite dramatically outspending the other listed developed countries.

So, you might ask, where is all the money we spend on health care going if not to improve our health care outcomes? Well, the answer is simple: higher profits for the health care industry.

The headline of a New York Times article says it all: “Gripes About Obamacare Aside, Health Insurers Are in a Profit Spiral.” As a result:

Since March 2010, when the Affordable Care Act was signed into law, the [stock prices of] managed care companies within the Standard & Poor’s 500-stock index — UnitedHealth, Aetna, Anthem, Cigna, Humana and Centene — have risen far more than the overall stock index. This is no small matter: The stock market soared during that period.

The numbers are astonishing. The Standard & Poor’s stock index returned 135.6 percent in those seven years through Thursday, a performance that we may not see again in our lifetimes. But the managed care stocks, as a whole, have gained nearly 300 percent including dividends, according to calculations by Bespoke Investment Group.

These and other leading health care corporations oppose a Medicare for all system because its adoption would put an end to their massive profits. And these companies have many allies in the rest of the corporate community because any policy that strengthens the principle of putting people before profits is a threat to them all.

Hopefully, however, the importance of health care and the obviously poor performance of our health care system as a health care system (as opposed to a profit center) will motivate people to keep pressing for real change. And, who knows, a health care victory might also encourage a broader public discussion about how best to organize the rest of our economy.