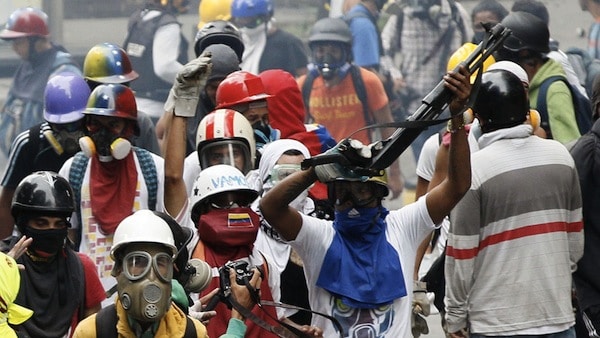 An opposition protester wields a shotgun an anti-government protest in Caracas, Venezuela, May 8, 2017. (AP/Ariana Cubillos)

The opposition in Venezuela, which is backed by the United States and supported by prominent human rights groups, like Amnesty International and Human Rights Watch, has played a key role in fomenting violence that has resulted in multiple deaths. However, most world leaders and press around the globe pin all responsibility on Venezuela President Nicolas Maduro’s government.

In the United States, it is exceptionally difficult to find news reports that document the violence of the opposition, along with the violence of the government. The fact that the vast majority of daily news reports do not detail the actions of the “guarimbas,”—the opposition blocking roads, setting fire to tires and other objects, and throwing objects—demonstrates how skewed media coverage of Venezuela is currently.

Deutsche Welle’s coverage of the constituent assembly vote described the day of the election as “one of the bloodiest days since protests began nearly four months ago.” At least ten people died. Candidate Jose Felix Pineda, a 39-year-old lawyer, was assassinated. Ricardo Campos, the regional secretary for Democratic Action, which is an opposition youth party, was shot and killed during a protest. (The report does not say whether it was government forces that shot Campos.)

A Venezuelan soldier was killed in the western state of Tachira. A bomb was set off in Caracas nearby police officers on motorcycles. It injured multiple officers.

Reuters journalist Girish Gupta in Caracas reported the streets were closed. Trash was burning on most of the streets and kids were out “in balaclavas with slingshots,” which has become normal. 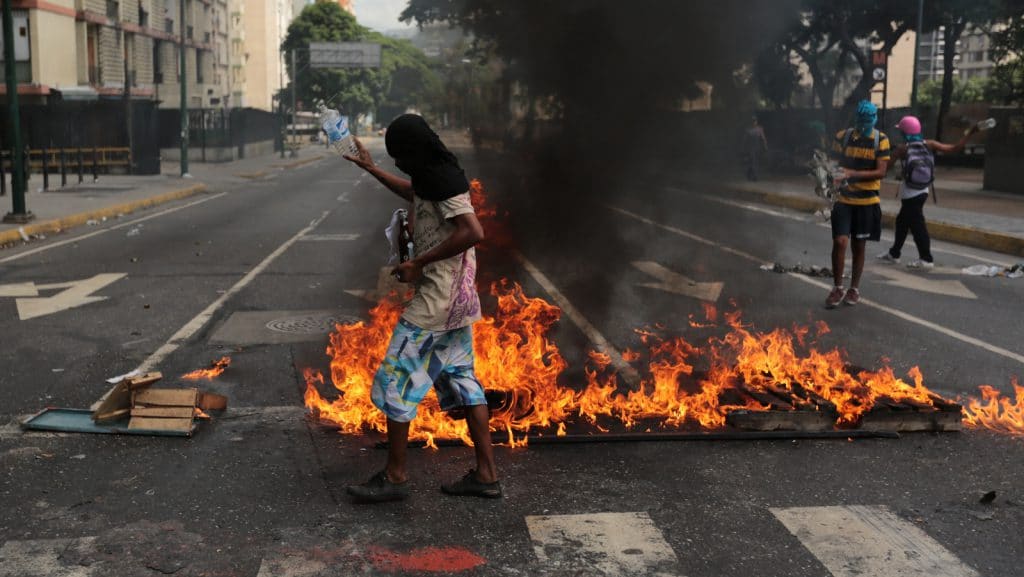 “We have – and this is something that’s surprised even me today, and actually very close to where I am based here in Caracas, we saw a bomb go off. It was targeted towards police officers. And it wasn’t huge. It didn’t kill anybody. But it’s not something – we don’t see that sort of insurgent-type equipment being used. So that’s interesting. And that might be an escalation we’re seeing from the opposition or some parts of it,” Gupta said.

Even the Los Angeles Times noted on August 1, “Protesters dressed in helmets, gas masks and carrying full body shields have sealed off many neighborhood streets with barricades made of trash, bricks, and abandoned vehicles. The ongoing battles with police and national guard members have forced motorists to create new traffic patterns to avoid violent flashpoints.”

On June 28, Oscar Perez, a member of the opposition stole a police helicopter and launched a grenade attack against the country’s Supreme Court. He is part of a “coalition of security forces,” who believe Maduro should resign immediately and apparently have no reservations about engaging in violent acts against government buildings. 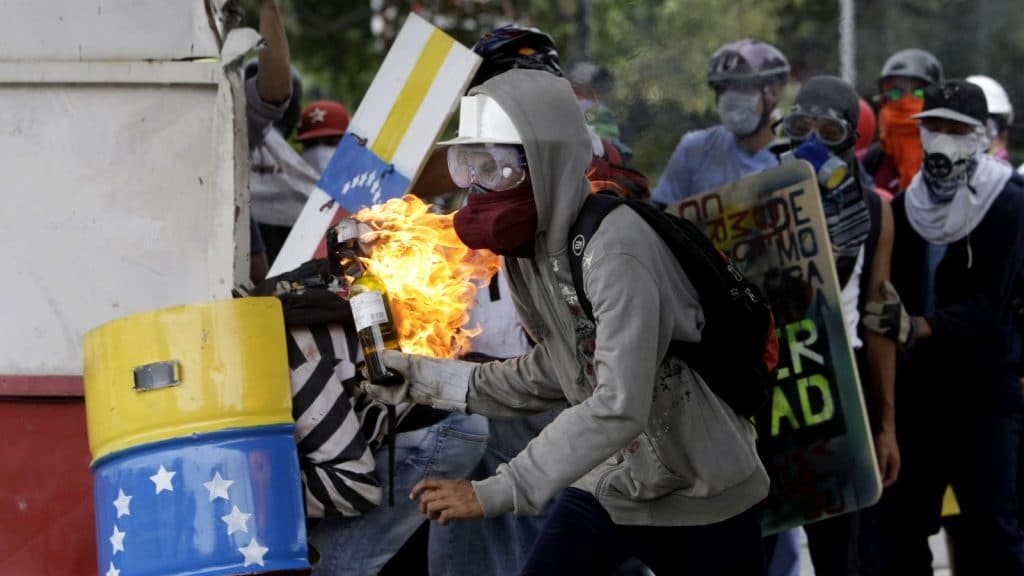 A demonstrators readies a gasoline bomb as he prepares to throw it at the police during clashes between authorities and anti-government demonstrators in Caracas, Venezuela, Wednesday, June 7, 2017. The protest movement has claimed more than 60 lives as it enters its third month. (AP Photo/Fernando Llano)

Amnesty International and Human Rights Watch take a simplistic and disingenuous view of the intensifying crisis in Venezuela, ignoring the acts of a violent insurgency entirely.

“Venezuela is at a turning point, as are its regional neighbors. Latin America should show the world it will not tolerate a full-fledged dictatorship that is willing and able to commit widespread abuses against its people while unraveling the fundamental democratic principles that the region worked has hard to build,” Human Rights Watch declared after the constituent assembly vote.

Erika Guevara-Rosas, who is the Americas Director for Amnesty International, proclaimed, “President Maduro and his government appear to be living in a parallel universe. The authorities cannot continue to ignore the tension and violence and should respond to the urgent needs of the entire population, including those who do not agree with the government.”

Ironically, the constituent assembly vote was held to address the urgent needs of the population. Maduro wanted the opposition’s participation to end the brewing conflict.

The opposition shrewdly chose not to participate, recognizing that refusing to participate would be far more rewarding than running a slate of candidates that might lose to “Chavistas” or Maduro loyalists. The opposition blasted the vote as one-sided and even held their own referendum against the constituent assembly vote that involved Venezuelans from all over the world. They were easily able to achieve the propaganda coup of further cementing perceptions that Maduro is a strongman, who must step down from power.

“By sanctioning Maduro, the United States makes clear our opposition to the policies of his regime and our support for the people of Venezuela who seek to return their country to a full and prosperous democracy,” Mnuchin added.

“Maduro is not just a bad leader, he is now a dictator,” H.R. McMaster, Trump’s national security adviser. “The United States stands with the people of Venezuela in the face of this oppression.”

Yet, what few are willing to concede is that calling the constituent assembly vote may have been a poorly conceived decision by Maduro, but it was most certainly within the government’s power.

The Venezuelan Constitution states that a “National Constituent Assembly may emanate from the president of the republic sitting with the cabinet of ministers.” There also is a bit of protection from undue influence in that it prevents Maduro from objecting to whatever new constitution is passed by the assembly. Existing authorities are not allowed to obstruct the process in any way.

Smartmatic, the company which has helped manage Venezuela’s voting system since 2004, accused the Maduro government of manipulating the results of the constituent assembly vote. But the company has provided scant specifics on how they know this for certain. They even said they did not pass evidence of alleged manipulation or tampering of the vote count to Venezuela’s electoral council, which seems puzzling.

In 2012, former U.S. President Jimmy Carter hailed Venezuela’s electoral process as the “best in the world.” He praised the Smartmatic voting technology, which “offers several security mechanisms for audits and verification of results, which have been accredited by national and international observers including the Carter Center.”

“The technological solution developed by Smartmatic, which has been used in Venezuela since 2004, includes touch-screen voting machines that store votes electronically (encrypted and scrambled), and print a paper receipt for each vote. This characteristic, the full implementation of the VVPAT concept, gives the system a great advantage,” Carter asserted.

Smartmatic could call on the Venezuelan government to conduct an audit or verification of results. Notably, that wasn’t in their statements to press. All they did was fan the flames of outrage against a left-wing government that carried out a process allowed by the country’s constitution.

What may have happened if the opposition, mostly composed of right-wing elements, had run a slate of candidates who pledged to resolve a deepening economic crisis?

More than likely the opposition would have sustained massive defeats at the polls. The country overwhelming believes the opposition lacks a plan for dealing with high inflation and the lack of state revenue for social services. They also oppose the violent tactics of the opposition. 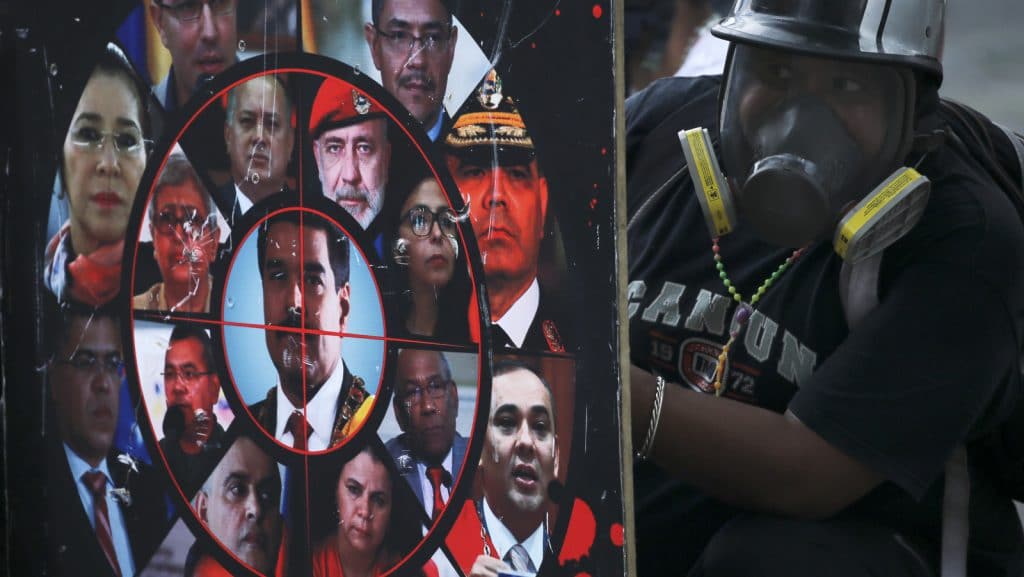 An anti-government protester holds a homemade shield brandished with photos of President Nicolas Maduro, government officials and a gun sight, during clashes with security forces blocking a march to the Supreme Court, in Caracas, Venezuela, Saturday, July 22, 2017. Protesters rallied Saturday in the Venezuelan capital for a march toward the embattled nation’s Supreme Court, opposing Maduro’s plan to rewrite the constitution. (AP Photo/Fernando Llano)

The opposition is much better off engaging in violent protests that force responses by the government and make the Maduro government look like an authoritarian regime. They won the support of the European Union, Canada, as well as Argentina, Brazil, Colombia, and Mexico, which condemned the constituent assembly vote. The Trump administration has turned to sanctions and other initiatives to force regime change, and there is no telling what the CIA might be doing to bolster the efforts of opposition activists.

CIA Director Mike Pompeo recently said the CIA is working with the Mexican and Colombian government to get a “better outcome” for “our part of the world.”

“Gas Lighting” On A “Grand Scale”

Regime change is only possible if the opposition is able to implant its propaganda into the world’s conscience.

“One of the most bizarre criticisms of Maduro’s government is that there is no freedom of expression,” Kane asserted. “Most of the media, however, both print and television, are privately owned and almost all are critical of the regime.”

Kane acknowledged the government wants to bring “diverse interests” together and pull back from the escalated violence. It also wants a new constitution to “give constitutional status to the social missions that they have embarked upon over the last two decades.”

“These missions have been the most successful part of the Bolivarian revolution; more than 1.5 [million] social-housing units were built, literacy increased hugely, and poorer people gained access to health care for the first time.”

Samuel Moncado, foreign minister and foreign Venezuelan ambassador to Ireland, “described the relentless distortion of reality in Venezuela as ‘gas lighting’ on a grand scale.”

“This is something that resonated with me and with most of the international delegation, as the Venezuela I have visited, on a number of occasions over the last 15 years, and have experienced firsthand, is a very different place to the one I have read about in the international press,”

“I regularly doubt what I have seen with my own eyes,” Kane shared. “I witnessed long queues outside polling booths on Sunday, as mostly poorer sections of the city turned out to vote in large numbers; other polling stations were quiet.” 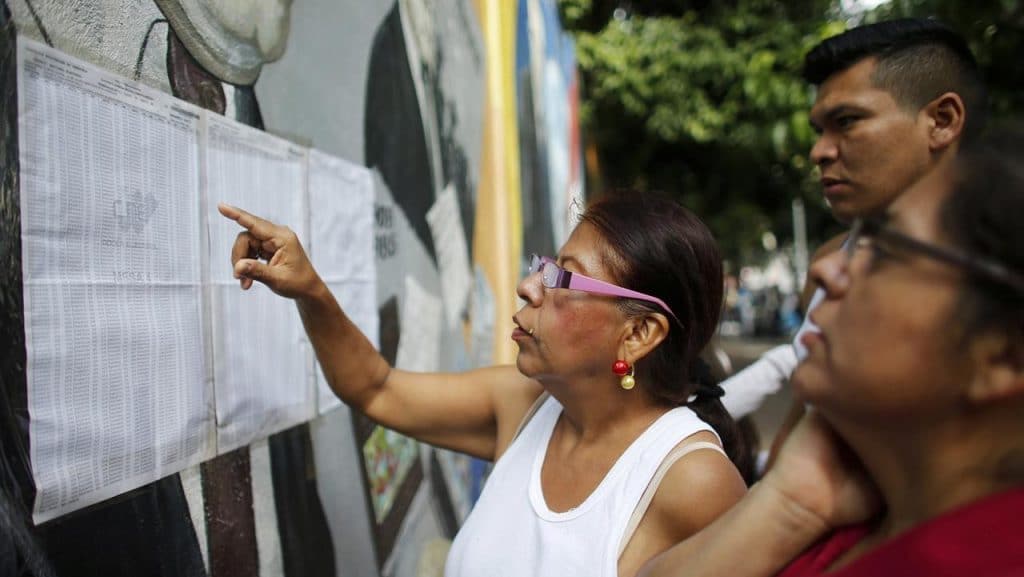 People check their voting machine at a list of voters provided by Venezuelan National Electoral Council, CNE, outside of a poll station during the election for a constitutional assembly in Caracas, Venezuela, July 30, 2017. (AP/Ariana Cubillos)

The “gas lighting” is a grand achievement of the opposition. Francisco Rodriguez of Torino Capital, who served in Hugo Chavez’s government but opposes Maduro, said on “Democracy Now!”, “The reality is that when there is political violence of this type, you’re not going to be able to find out what really happened until you have a truth commission.”

“You have investigations, you kind of can understand the process that led to it.”

Make the world believe the government is violent and there is no way to really figure out what violence the opposition is responsible for and any insurgency can engage in the armed overthrow of their government with global support. That does not mean they will be able to successfully govern a country.