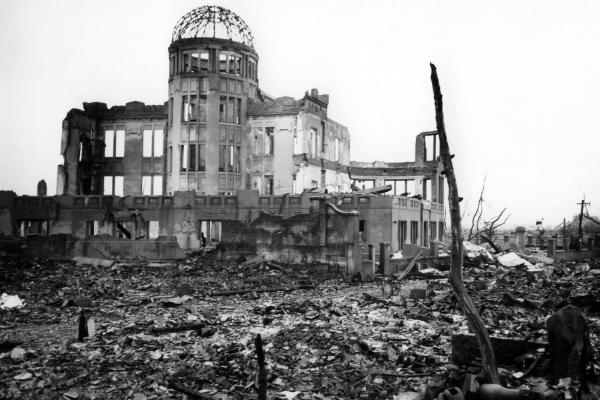 This article by the Bulletin of the Atomic Scientists about a secret report (circa 1945) arguing strongly against mass killing as a means deterrence to the use of nuclear weapons is worth reading over. Note: both the title given to the piece and the comments of the authors toward the end should be ignored. At the time, the U.S. was the only country with a nuclear bomb and a Japanese surrender was imminent before Hiroshima and Nagasaki were destroyed. As the very report under consideration argues convincingly, it is absurd to suggest that mass killing was “probably” the best option to make the use of nuclear weapons “taboo.” There is no morally defensible reason for destroying two densely populated cities and killing upwards of 200,000 humans (only 20,000 of which were soldiers). The goal of the U.S. war planners had nothing to do with ending the war: it was the first act of a new Cold War against the Soviets. —Eds.

Arthur H. Compton was one of the many past and future Nobel laureates who worked in the secret US nuclear weapons project during World War II. He directed the Metallurgical Laboratory (Met Lab) at the University of Chicago, where refugee Italian Nobelist Enrico Fermi supervised the construction of the first reactor, future Nobelist Eugene Wigner, from Hungary, led the design of the plutonium-production reactors subsequently built at Hanford, Wash., and future Nobelist Glenn Seaborg developed the first chemical process for extracting plutonium from irradiated uranium.

With these tasks completed, some of the scientists at the Met Lab began to consider the implications of nuclear weapons for the future. One of the products of their concern was a memorandum on “Political and Social Problems” written in early June 1945 by a committee of project scientists chaired by the refugee German Nobelist, James Franck.

The “Franck Report,” which became the seminal document on nuclear arms control after it was published in the May 1, 1946 issue of the Bulletin of the Atomic Scientists, focused on the concern that revealing the bomb through a surprise attack on an already defeated Japan could make a nuclear arms race with the Soviet Union impossible to prevent. (The “Memorandum on ‘Political and Social Problems’ from Members of the ‘Metallurgical Laboratory’ of the University of Chicago” with Compton’s cover letter, is posted here. The initial declassification involved some redactions that are discussed by nuclear historian Alex Wellerstein here.)

The scientists argued that the military benefits of using the bombs would likely be small:

It is doubtful whether the first available bombs, of comparatively low efficiency and small size, will be sufficient to break the will or ability of Japan to resist, especially given the fact that the major cities like Tokyo, Nagoya, Osaka and Kobe already will largely be reduced to ashes by the slower process of ordinary aerial bombing.

They also contended that use of the bombs could undermine chances of preventing future nuclear wars:

If we consider international agreement on total prevention of nuclear warfare as the paramount objective, and believe that it can be achieved, this kind of introduction of atomic weapons to the world may easily destroy all our chances of success. Russia, and even allied countries which bear less mistrust of our ways and intentions, as well as neutral countries, will be deeply shocked. It will be very difficult to persuade the world that a nation which was capable of secretly preparing and suddenly releasing a weapon, as indiscriminate as the rocket bomb and a thousand times more destructive, is to be trusted in its proclaimed desire of having such weapons abolished by international agreement.

And so they advocated for a demonstration of the atomic bomb’s power:

From this point of view a demonstration of the new weapon may best be made before the eyes of representatives of all the United Nations, on the desert or a barren island. The best possible atmosphere for the achievement of an international agreement could be achieved if America would be able to say to the world, “You see what [a] weapon we had but did not use. We are ready to renounce its use in the future and to join other nations in working out adequate supervision of the use of this nuclear weapon”…After such a demonstration the weapon could be used against Japan if a sanction of the United Nations (and of the public opinion at home) could be obtained, perhaps after a preliminary ultimatum to Japan to surrender or at least to evacuate a certain region as an alternative to the total destruction of this target.

Compton was also a member of the Scientific Panel that advised Secretary of War Henry Stimson’s Interim Committee, which was deciding US nuclear policy. On June 12, 1945, Compton transmitted the Franck Report to Stimson, who responded by asking the Scientific Panel (Compton, Fermi, Ernest Lawrence, and J. Robert Oppenheimer) for its collective view. On June 16, the panel made two recommendations:

1) Instead of the Franck Report’s proposed demonstration for the United Nations, the United States should inform Britain, Russia, France, and China that the US had made progress on nuclear weapons, might use them in the current war, and was open to suggestions “as to how we can cooperate in making this ·development contribute to improved international relations.”

2) Disagreeing with the Franck Committee’s prioritization of post-war nuclear arms control, the group stated that as “we can propose no technical demonstration likely to bring an end to the war; we see no acceptable alternative to direct military use.”

The rest is history.

Since the end of the war, the popular view in the United States has been that the bombing of Hiroshima and Nagasaki on August 6 and August 9, 1945, precipitated Japan’s surrender on August 15. There is a strong view among historians, however, that the massive surprise attack on Japan-occupied Manchuria by the previously neutral Soviet Union on August 8 had more impact on Japan’s leaders. [The most authoritative treatment may be Tsuyoshi Hasegawa’s Racing the Enemy: Stalin, Truman and the Surrender of Japan (Harvard University Press 2005), which is based on research in Japanese, Russian and US archives.]

We tend to agree with the latter view—especially since the Hiroshima and Nagasaki bombs were exploded over relatively small cities about as far away from Tokyo as you can get in mainland Japan (700 and 950 kilometers distant, respectively). The news of the destruction came to Tokyo through the army, which reported the effects accurately to its leadership. (See the translation of US intercepts of Japanese communications, “’Magic’ – Far East Summary” here.) But the leadership downplayed the threat and reportedly even told its cabinet that, contrary to the information that the United States was broadcasting, the explosion over Hiroshima could have been of a conventional bomb. The military also advised the public that protection from the flash effects of the bomb could be provided by a white cloth.

But what about the idea of a demonstration? The proposal in the Franck report was for a demonstration to representatives of the anti-Axis alliance. The purpose of that demonstration was to set the stage for post-war nuclear arms control.

One possibility would have been a nighttime explosion over Tokyo Bay such as the United States set off in the desert of southern New Mexico on July 16, 1945, in its test of the plutonium bomb design later used on Nagasaki. Indeed, on May 31, 1945, at a meeting with the Interim Committee when the effects of the planned nuclear bombings on Japan’s continued willingness to fight were being discussed, according to the notes of the meeting, Oppenheimer emphasized that “the visual effect of an atomic bombing would be tremendous. It would be accompanied by a brilliant luminescence which would rise to a height of 10,000 to 20,000 feet.”

Tokyo Bay is about 15 kilometers across. Some fishing vessels or coastal ships might have been caught in the blast, but an explosion could have been set off over the center of the bay without causing damage on land.

The luminosity of a 20-kiloton fireball would peak, however, about 1.5 seconds after detonation and fall to about 10 percent of peak at about 8 seconds. Only a relatively few officials would happen to see it, and there would be no enduring evidence of the destructiveness of the explosion. Also, the fireball might blind those looking directly at it. (At the July test in New Mexico, observers looked at the fireball through welder’s glass, according to eyewitness accounts that can be reviewed here.)

Another possibility would have been to bomb an uninhabited area near Tokyo. There are forested mountain areas within 50 kilometers of Tokyo, from which the flash would have been visible. (Trees downed and burned over an area 3 kilometers in diameter would have given mute testimony of the destructiveness of the blast, as did a huge area of scorched and felled trees in Siberia (see photo below) for decades after the 1908 high-altitude explosion of a 100,000-ton space rock that had entered the atmosphere at an estimated speed of 15 kilometers per second. 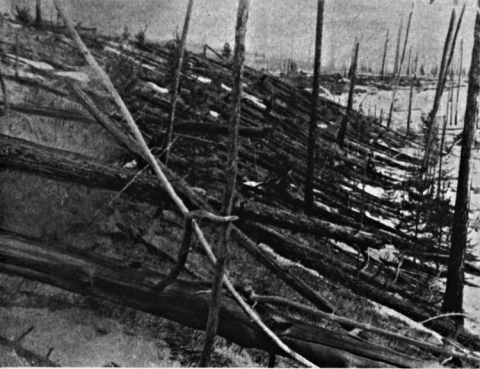 Would a demonstration on a forest near Tokyo have had as much or more impact on ending the war as the bombings of distant Hiroshima and Nagasaki? Possibly.

Would non-use, a demonstration, and an offer of international control to 25 allies, including the Soviet Union, have helped forestall the post-World War II nuclear arms race? Given the paranoia of Joseph Stalin, perhaps not.

Would non-use at the end of a brutal total war have created a taboo against the use of nuclear weapons as strong as resulted from the demonstrated horror of their effects against the two Japanese cities? Perhaps not.

But, of course, we’ll never know for sure.