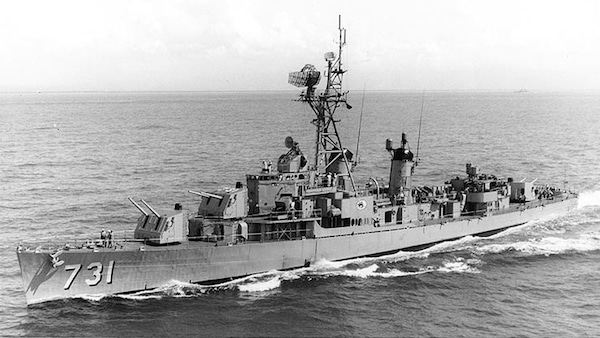 The USS Maddox in the Gulf of Tonkin. (photo: US Navy)

“American Planes Hit North Vietnam After Second Attack on Our Destroyers; Move Taken to Halt New Aggression,” was the Washington Post headline some 53 years ago, on August 5, 1964.

The front page of that day’s New York Times reported: “President Johnson has ordered retaliatory action against gunboats and ‘certain supporting facilities in North Vietnam’ after renewed attacks against American destroyers in the Gulf of Tonkin.”

Of course, as historians now acknowledge, there was no “second attack” by North Vietnam—no “renewed attacks against American destroyers.”

But as activist, author and FAIR associate Norman Solomon has described, including in the film War Made Easy, US journalists reported those official claims as absolute truths, ignoring countervailing evidence and opening the floodgates for the bloody Vietnam War and the deaths of over 50,000 Americans and millions of Southeast Asians.

The official story was that North Vietnamese torpedo boats launched an “unprovoked attack” against the US destroyer Maddox, which was on “routine patrol” in the Tonkin Gulf on August 2—and that North Vietnamese PT boats followed up with a “deliberate attack” two days later, firing 22 torpedoes on the Maddox and another destroyer, Turner Joy. The New York Times (8/8/64) reporting the
Gulf of Tonkin resolution.

President Johnson was on television that night, telling
Americans that “aggression by terror against the peaceful villagers of South Vietnam has now been joined by open aggression on the high seas against the United States of America,” ordering retaliatory airstrikes representing a momentous escalation of the war, and calling for immediate passage of the Gulf of Tonkin resolution, which stated, “Congress approves and supports the determination of the president, as commander in chief, to take all necessary measures to repel any armed attack against the forces of the United States and to prevent further aggression.”

“It’s like grandmother’s nightshirt. It covers everything,” Johnson quipped.

The House dispensed with hearings and approved in 40 minutes; the Senate took two days, finally voting 88 to 2 to adopt.

But reality was very different from the tale that Johnson and the press told the public.

The Maddox, which fired first in the earlier skirmish, was not on routine patrol; it was engaged in aggressive intelligence-gathering maneuvers—in sync with coordinated attacks on North Vietnam by the South Vietnamese navy and the Laotian air force.

And as for the second reported attack, the spark for the “retaliatory” airstrikes, it simply never happened. Many historians think the Maddox crew mistook their sonar’s pings off their own rudder for North Vietnamese torpedoes; Johnson later “joked” they might’ve been shooting at whales.

But it shouldn’t surprise you to know that there was plenty of intelligence at the time suggesting that no attack had occurred; it was just overlooked and obscured—intentionally by warmongers in the government, but also by a credulous press. Sound familiar?

Johnson’s late-night speech won editorial praise. The president, said the New York Times, “went to the American people last night with the somber facts.” The LA Times urged Americans to “face the fact that the Communists, by their attack on American vessels in international waters, have themselves escalated the hostilities.”

As Tom Wells, author of The War Within: America’s Battle Over Vietnam, recounts, US media

described the air strikes that Johnson launched in response as merely “tit for tat”—when in reality they reflected plans the administration had already drawn up for gradually increasing its overt military pressure against the North.

The distortion was due to media’s “almost exclusive reliance on US government officials as sources of information”—and their “reluctance to question official pronouncements on ‘national security issues.’”

Congress repealed the Gulf of Tonkin resolution in January of 1971, but that didn’t mean much, since they continued to finance the war. And elite media, evidently, set about a studious forgetting of what columnist Sydney Schanberg called—30 years later, in the midst of another war—the press corps’ “unquestioning chorus of agreeability when Lyndon Johnson bamboozled us with his fabrication of the Gulf of Tonkin incident.”

Americans, Schanberg said, are “the ultimate innocents. We are forever desperate to believe that this time the government is telling us the truth.”

That’s an innocence of course, that we can ill afford—and that journalists, above all, should fight the impulse to indulge.