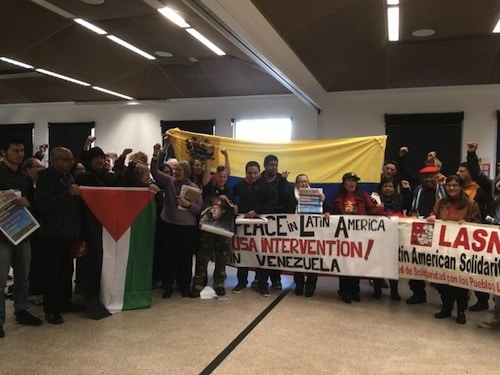 A Venezuela solidarity meeting in Melbourne on July 29.

Opposition groups in Venezuela are currently engaged in a campaign to overthrow the democratically-elected government of President Nicolas Maduro.

Portrayed by the media as a peaceful, democratic movement, it is clear that what Venezuela is experiencing is a right-wing destabilisation campaign that not only seeks to remove Maduro but to roll back the important gains of the country’s Bolivarian Revolution.

Through campaigns of terror, assassinations, the burning alive of government supporters and attacks on government services and food distribution networks, the opposition hopes to topple the government as a first step to destroying Chavismo.

Over the past two decades, Venezuela’s political landscape has been dramatically reshaped by the rise of Chavismo, a political movement of the country’s poor and working classes.

Chavismo’s origins lie in a convergence between the multitude of street protests that rocked neoliberal regimes during the late ’80s and ’90s and a large group of soldiers who no longer tolerated the army being used to repress the poor in order to protect the power of a corrupted elite.

Out of this convergence arose the figure of Hugo Chavez, who won the 1998 presidential elections riding this wave of discontent against neoliberalism and political exclusion.

Despite coup attempts, attacks on the oil industry, various waves of violent street protests and more than 20 elections, Chavismo went on to consolidate itself as the new centre of politics in Venezuela.

It also inspired millions around the world by demonstrating that an alternative to neoliberalism is possible; one that redistributed the nations’ wealth towards social programs, while dramatically expanding people’s participation in daily decision making in their communities and workplaces.

Chavismo also led the charge in terms of the leftward shift that occurred in South America at the turn of the century, and its call for a “21st Century Socialism” resonated around a world where only a few years before socialism was a dirty word.

Today, Chavismo remains the single largest political force in Venezuela. But it is facing its biggest challenge to date.

The challenge goes beyond the current rightist offensive.

It encompasses the serious economic crisis the country is engulfed in — the result of a combination of factors: a collapse in oil prices, economic mismanagement and a concerted campaign by the private sector to strangle the economy — together with the severe social consequences this has brought about for ordinary people.

The gains of Chavismo are at risk and the right within Venezuela and internationally are seizing this moment to try to wipe them out completely.

The inability of Venezuela’s right-wing opposition to remove Maduro — essentially because it has been unable to fracture Chavismo’s base of support in the popular classes and armed forces — has seen governments internationally, particularly the US, play a more active role in the destabilisation campaign.

Together, they hope to discredit the idea that any alternative to neoliberalism exists and to resolve the current crisis by making the poor pay for it. Doing this will require the destruction of Chavismo as a political movement.

Just as the right-wing has revealed that the international battle will be critical to their success within Venezuela, it is incumbent on the left to step up our solidarity with the people of Venezuela.

There is no doubt that criticism can be made of the Maduro government, but it is equally true that the overwhelming majority of popular, working class and social organisations — those most on the left would claim to be in solidarity with — continue to defend the Maduro government as a necessary shield against what is likely to come next.

In this regard, solidarity activists have held a number of public forums and protests in recent weeks as part of stepping up the campaign here.

Importantly, a number of trade unions, including the Maritime Union of Australia Sydney branch, the Construction, Forestry, Mining and Energy Union (CFMEU) Victorian branch and the construction division of the CFMEU WA, have come out in defence of the people of Venezuela and its government.

It is incumbent on the left to help continue building this solidarity to ensure that the current rightist offensive is defeated. What’s at stake is not simply the Maduro government, but the very existence of one of the most important left political forces in the world today.