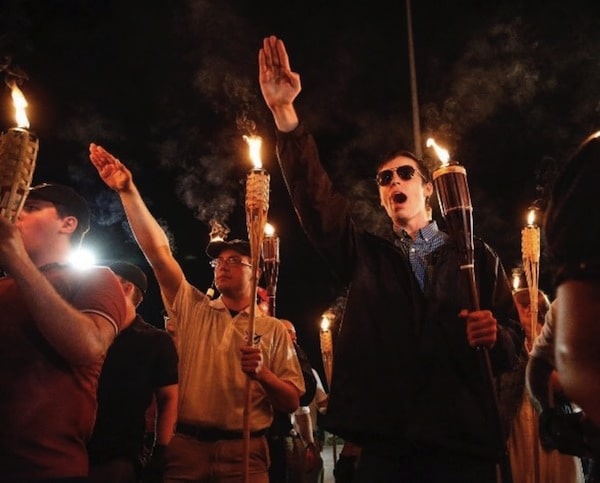 In Charlottesville a “Unite the Right” rally was planned and a march was held ahead of it where alt-righters gathered to march with lit tiki torches.

But when similar movements appear on their own streets they are outraged.

Politicians and media hail such persons when they appear, often hired by the CIA, to overthrow the government of some foreign country. They condemn the same mindset and actions at home. But glorification of right-wing violence elsewhere hands justification to right-wing groups at home.

Then Secretary of State Hillary Clinton, Republican Senator McCain, The New York Times, the Washington Post and many “liberals” supported the above Nazis.

You cannot have only one of these.

To claim, as “liberals” do now, that such marches as in Charlottesville, “is not what and who we are”, is a lie. Ask people from outside the U.S. how the empire appears and acts towards them.

The U.S. uses fascism, religious extremism, torture, targeted killing and many other vile instruments of power in its quest for global dominance. All of these methods and ideologies, all of them, will one day come home.