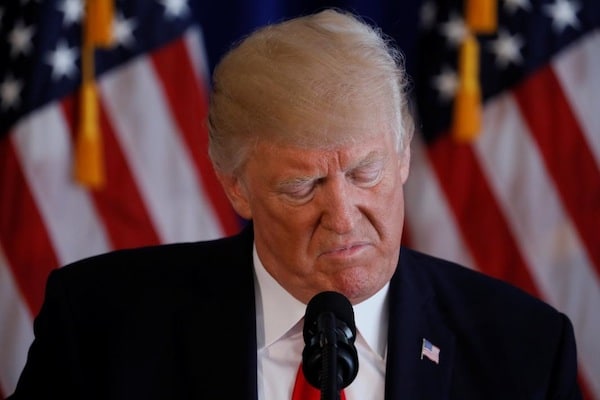 U.S. President Donald Trump reads from a prepared statement as he delivers remarks on the protests in Charlottesville, Virginia, from his golf estate in Bedminster, New Jersey U.S., August 12, 2017. REUTERS/Jonathan Ernst

I sat here listening to Trump’s remarks in connection with the violence carried out by neofascists in Charlottesville this afternoon, violence which has resulted in the death of at least one anti-fascist. He condemned bigotry on what he called all sides.

Once again Trump obscures reality. He either ignores the violence and terrorism carried out against traditionally oppressed groups, e.g., attacks on mosques, or he uses evasive language in order to avoid pointing the finger at the real perpetrators of racist violence.

Some will act as if this is a sign of incompetence on the part of Trump. While Trump clearly lacks competence in so many aspects of his life and presidency–as we are witnessing in the sabre-rattling with North Korea–Trump’s attitude towards race is not about incompetence. This represents a long-standing feature of who he is and the politics that he represents. This is someone who spearheaded the Birther attack on President Obama’s legitimacy, raising unsubstantiated suggestions regarding Obama’s citizenship. This is someone who led the charge against the Central Park 5. This is someone who has been quite comfortable aligning himself with right-wing populists and neofascists.

We should not expect anything better or clearer from Trump. What we must do is rip the cover off of every effort that he undertakes to obscure white supremacist and xenophobic violence and hatred. Progressives should stop using the term “alt-Right” and recognize that what we are witnessing are neofascist movements, movements that are interested in provoking violence and are, in many cases well-armed.

Trump is prepared to remain silent about such movements. Many liberals are hoping that the neofascists will simply go home and shut up. What we must understand is that they will not go home and shut up. They must be defeated. They cannot be tolerated. They are a cancer in the system of democracy. They seek not to create a more conservative system but to radically eliminate democracy and with it many populations that they believe to be antithetical to the openly white republic that they believe that the USA must return to being.

They shall not pass!

Bill Fletcher Jr. is a longtime socialist, trade unionist, and internationalist. He is a senior scholar with the Institute for Policy Studies, an editorial board member of the Black Commentator, and the immediate past president of TransAfrica Forum. He is the author of several books including Solidarity Divided (coauthored with Dr. Fernando Gapasin) and “They’re Bankrupting Us!”—And Twenty Other Myths About Unions.