The sirens and shouted curses from Charlottesville resounded all too audibly even here in far-off Germany. Little imagination was required; how well we know such brutal faces, twisted with hatred, the racist epithets and threats! Sometimes we even hear the ugly words in German: Sieg Heil! 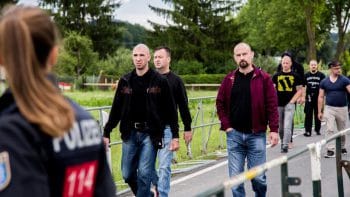 Neonazis parade into the concert, named Rock Against Überfremdung. (“Uberfremdung” is a peculiar German word that roughly translates to being “swamped by foreigners.”)

Scenarios like that, not only as echoes from the past, have become a part of life in today’s Germany. Almost every weekend, in some town or city, we see the racists and neo-Nazis march, with their hard boots, their flags and fearsome banners, so much like those in Virginia. Sometimes just a small, hard core or private gathering with nationalist songs escalating to texts about gas and Jewish blood. But also big crowds; four weeks ago, in Themar, a hitherto unknown little town in Thuringia, 6000 gathered for a “rock concert.” One sponsor, who runs a Nazi restaurant nearby, sold T–shirts marked “HTLR”. The full name is officially taboo but, he explains with a twisted grin, it means only “Homeland-Tradition-Loyalty-Respect”. Who can object to that? Or to prices of 8.80 euro—when everyone knows that 8 is letter H in the alphabet, and 88 is code for Heil Hitler! Or ”1933”—the year the Nazis seized power. It’s all legal, OK’d by the court. Even a big parking lot was reserved for them. 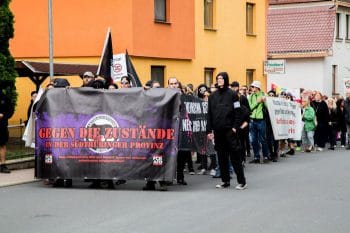 The counter-protest making its way through the town of Themar in the state of Thuringia.

Even very decent-looking citizens may join the marching, like in Dresden every Monday for two years. “Who us? Racists? We only want to defend ‘German culture’ against the inroads of those ‘Islamists!’” With slogans, songs, only now and again with torches and weapons. They called themselves PEGIDA—“Patriotic Europeans against the Islamization of the West”. Then a party was founded by an attractive young entrepreneur and an elderly, respectable professor; AfD (Alternative for Germany). It is already treated oh so fairly by some in the media—just short of favorably—and will soon have several dozen seats in the national Bundestag; it is already represented in many local and state legislatures. Like the booted men or the T-shirt singers, its main voters, its basic program is “Hate the enemies”! In Charlottesville the enemies are sometimes Jewish, but mostly Black or Muslim, but always if possible weaker, poorer—and somehow different—in color, clothing, faith. And in Germany the same: sometimes Jewish but mostly Turkish or, with the recent refugees, Arab, African, Afghani. A hijab head-covering is sufficient: “A Muslim, an Islamic enemy!”

While the rabble of Charlottesville finds traditions like those of Robert E. Lee or Gen. Nathan Forrest to defend, some Germans have more recent models. This Saturday in Berlin marks the 30th anniversary of the death of Hitler deputy Rudolf Hess, who “Stuck to his principles till the end” as one T-shirt proclaims. The Nazi march is to recall the (demolished) site where he was imprisoned. He is honored every year, but this time, very big, in Berlin. How many are arriving for the march? The police, who will protect them, have estimated 1000, and stress their strict rules: only one flag for every 50 marchers, only one drum for every hundred. No loud listing of the names of anti-fascists! And no explicit praise for Hess. But there is little doubt as to their intentions, for now or the future!

How many will be there to oppose them? The anti-fascists usually outnumber the Nazis! But in that out-of-the-way little town in Thuringia only 1000 were there to oppose the 6000. As ever the police try to keep the two groups apart, but somehow often seem to protect the right of way of the disciplined, orderly marching Nazis while swiftly arresting unruly antifascists trying to block their path.

Compared with Charlottesville, there are differences but too many similarities. No prominent German official risks praising the pro-Nazis; Hitler, Hess and the swastika are legally taboo, and there are hardly any “beautiful statues and monuments” to be rescued.

But here, too, not on Twitter but in very respectable media, there are statesmen who denounce not only pro-Nazis but ”extremists on the left and the right”. Those “Antifas” are also a bad bunch. They sometimes break windows and set cars on fire.

Indeed, such things occur now and then, and represent a genuine problem, especially because there is a suspicion, occasionally backed up by facts, that behind the masks and balaclavas are not only angry anti-nazis but some who love wreckage, some who love alcohol and perhaps, throwing the first, stones, or torches; some agents provocateurs granting the media what they require while ignoring or smearing a great majority marching to oppose racism and fascism—and who may even, very peacefully, tear down a racist flag or statue here and there.

Behind carefully-worded denunciations of “both the left and the right” some elderly German survivors hear fearsome echoes, recall Germany’s past with dread and look forward with anxiety, not only for Germany. They know where such boots, straight-arm salutes, and “neutrality” can lead.

In the German elections on September 24th our smiling, sensible and good-natured Angela, so long friendly to refugees and motherly to all good Germans, seems very likely to help her party win again. She is very much an opposite to Trump; she even disagrees openly with him.

But oh, her lieutenants! While Transportation Minister Alexander Dobrindt bows low to his friends in a pollution-friendly auto industry, Finance Minister Schäuble continues squeezing every last euro from the poorer countries of southern Europe and breaking all resistance. Defense Minister Ursula von der Leyen calls for more billions for defense, sends troops to the deserts of Mali, the mountains of Afghanistan and, more dangerously by far, to the borders of Russia within earshot of Kaliningrad and St. Petersburg. With every new scandal about Nazi-era traditions in her Bundeswehr she calls for renewed cleansing—which somehow never succeeds. And Interior Minister Thomas de Maizière, after false, distorted reports on the “riots” in Hamburg, denounces demonstrators, stresses only the few violent ones and proposes that “we should require them to report to the police at regular intervals and if, need be, wear electronic ankle monitors” while he moves toward the extension of lasting monitoring of everyone—to the last telephone call, email or visit to a public place. Recent leaks indicated mysterious ties between police or FBI-equivalents with anti-foreigner murders. Who in the end would be defined as “leftist extremists”? Also those who demonstrate on climate, for peace and solidarity?

No, Germany has no exact equivalent of the White House cabal; its leaders are highly educated and circumspect in their speeches. But growing threats in both countries are far too similar. The dangers, especially if some great crisis should hit again, are cause for alarm.

In both countries—and elsewhere—there is courageous opposition to such threats. Many organizations resist racism, repression, massive armament build-ups and provocations—and the suffering of those hit by deprivation at home or abroad. There are many heroic models in the past—in Germany and the USA. Growing unity—in their spirit—is perhaps the only key to locking the door on the forces of hatred and bloodshed, from Charlottesville to Thuringia, from Washington to Berlin.