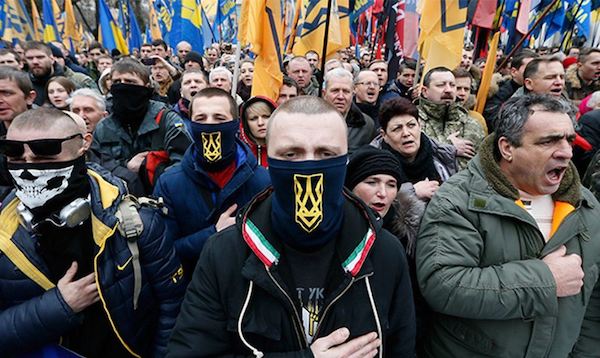 In the wake of violent protests involving white supremacists and Neo-Nazis in the U.S., the Pentagon’s top military brass issued unprecedented condemnations of “racists and extremists”. One veterans spokesman said: “Anyone waving a Nazi flag must be rooted out of our society”.

What makes the Pentagon’s response to Swastika-flag-waving American Nazis rather bizarre is that this week the U.S. Defense Secretary, General James Mattis, is reportedly traveling to Ukraine where he is to sign over shipments of lethal weapons to the armed forces of the Kiev regime. That regime openly glorifies Ukrainian regiments that collaborated with the Nazi Third Reich during the World War Two.

Mattis, the top Pentagon official, is due to authorize the transfer of $50 million-worth of military gear to the Kiev regime. This will mark the first official delivery of lethal equipment from the U.S. Previous military aid to Ukraine was reportedly “non-lethal”. Among the inventory Mattis is signing over are Javelin anti-tank missiles.

Modern-day regiments under the control of the Kiev regime, such as the Azov Battalion, publicly self-identify with Nazi-collaborating descendants and former pro-Nazi Ukrainian leaders like Stefan Bandera. This Neo-Nazi ideology of the Kiev-run military is a central impetus in why these forces have waged a three-year war on the ethnic Russian population of the breakaway Donbas region in Eastern Ukraine. The latter refuses to recognize the legitimacy of the Kiev regime which seized power in February 2014 in a coup d’état against an elected government. The American CIA backed that violent coup.

Political and financial support from Washington and the European Union has underpinned the Kiev regime led by the dubiously elected President Petro Poroshenko. This is in spite of the fact that the Kiev regime continues to wage a war on the people of Donbas in violation of a peace deal – the Minsk Accord – brokered by Russia and the EU in 2015. Western governments and media accuse Russia of sponsoring the breakaway Donbas republics and their militia, and of infiltrating its troops into the region. Russia denies direct military involvement, but is believed to be supporting the self-declared Republics of Donetsk and Lugansk.

The Pentagon’s supply of weaponry to Kiev forces will no doubt embolden their regiments to step up violations of the truce which was supposed to be implemented under the Minsk Accord. Hundreds of breaches are reported on a weekly basis in which towns and villages in Donestk and Lugansk come under fire from heavy artillery. Alexander Zakharchenko, the leader of the Donetsk People’s Republic, has recently remarked that his defense forces “are not fighting Ukrainians, but rather Banderites” – that is, Neo-Nazi militia who adulate their Third Reich hero Stefan Bandera for assisting the German SS exterminate thousands of fellow Ukrainians deemed to be “sub-human”.

The American military support for the Kiev regime and its Neo-Nazi death squads attacking the people of Donbas is a monumental contradiction to what the U.S. Joint Chiefs of Staff were declaring last week about extremists on American soil.

All five of the Joint Chiefs of Staff – the Army, Navy, Air Force, Marines and National Guard – issued public condemnations of the violence perpetrated by assorted white supremacists and Neo-Nazis in the state of Virginia. The latter groups were protesting the proposed removal of American Civil War statues commemorating Confederate military leaders like Robert E Lee. Counter-demonstrators claim the statues are icons of racial prejudice and white supremacy. Many of the pro-Confederate protesters were carrying Nazi flags and other fascist icons. In a deadly incident in Charlottesville, Virginia, a suspected Neo-Nazi man rammed his car into a crowd killing a woman.

U.S. President Donald Trump came under intense public criticism for being slow to condemn the violence and for appearing to lay blame on both sides, thereby equating Neo-Nazis with anti-fascist protesters.

Prominent news media organizations, like the Washington Post, New York Times and CNN, ran editorial comments lambasting Trump for his equivocal position, which allegedly afforded the Neo-Nazi groups a degree of legitimacy. CNN ran the headline: “Trump is who we feared he was”.

A New York Times oped piece declared: “The Test of Nazism That Trump Failed”. Adding: “There can be no ‘two sides’. If the president is not against Hitlerism, he is for it”.

The Washington Post editorial board said that Trump had “brought the international image of the U.S. into disrepute”.

Then there were numerous resignations by business CEOs from White House consultative panels, again in protest over Trump’s alleged association with racists and bigots. Even though to be fair to the president he did explicitly condemn such groups.

The national controversy appeared to be catharsis for politicians, media, business leaders and public alike in which it was proclaimed that “America is not like that” – meaning, not a supporter of Nazis and fascsim. In almost ritualistic fashion, the evils of racism, fascism, white supremacy and Nazism were exorcised from the body politic – or at least supposedly exorcised.

Joining in the catharsis were the Joint Chiefs of Staff. The New York Times reported:

“In an unusually public move, the nation’s top military leaders, who typically try to steer clear of social controversy, have come out strongly against racism and extremism in the wake of violent protests over the weekend. Five of the Joint Chiefs of Staff, representing the Navy, the Marines, the Army, the Air Force and the National Guard, posted messages on social media condemning hatred and Neo-Nazis, saying that the extremist violence in Charlottesville, Va., on Saturday went against the military’s core values”.

As the NY Times noted, the public condemnations by the Pentagon top brass were an extraordinary rebuke to President Trump who, as titular Commander-in-Chief, is their superior.

Its report also quoted Charles E Schmidt, the national commander of the American Legion, who said:

“Americans fought fascism and crushed the Nazis in World War Two, and anyone who waves a Nazi flag on our soil is, by very definition, anti-American. The disgusting displays of hatred and bigotry on display in Charlottesville dishonor all veterans who fought and died to stamp out fascism”.

The public outpouring is classic American cognitive dissonance. Condemning Nazis at home while at the same time arming Nazis abroad. How does Nazism at home offend “our core values” when “our core values” involve politically, financially and militarily supporting Nazis in Ukraine?

To be sure, there is a long history of such American support for Nazis in Ukraine going back to the end of World War Two, when the Pentagon and CIA covertly backed the Gehlen Organization of former Third Reich General Reinhard Gehlen and his Ukrainian Nazi partisans in their sabotage operations against the Soviet Union.

In explaining American cognitive dissonance there are at least two factors. One is the lack of U.S. media reporting on what is actually going on in Ukraine. How can so many ordinary Americans be alarmed by Neo-Nazis at home while seemingly insouciant about the same kind of fascists in Ukraine? That disconnect is due to ignorance, owing to the lack of U.S. media coverage about what is really happening in Ukraine. U.S. media seem more concerned to report claims that Russia is the culprit for destabilizing Ukraine. Which is all part of the ongoing Russophobia in the U.S. media distorting the reality of international relations.

A second factor for American cognitive dissonance is that the outpouring of condemnation of white supremacists and Neo-Nazis in the U.S. by many public figures is simply a cynical PR exercise. Of course, the hate-filled mobs with Nazi regalia in Virginia and other U.S. states are damaging the “American brand” of supposed liberal democracy in the eyes of the world. Therefore the imagery must be swiftly expunged from public view with vigorous condemnations. But the cynical disingenuousness is betrayed by the fact that the U.S. is arming and bankrolling the same hate-filled Nazis in Ukraine.

The arms dealing trip by Pentagon boss James Mattis to the Neo-Nazis in Ukraine this week is the reality check on what the Washington establishment and the American military-industrial complex really think about Nazism and extremists.

We could also add to the list the American arms dealing to fundamentalist regimes like Saudi Arabia and the covert arming of head-chopping Wahhabi terrorists. All of them are welcome clients for American militarism, in the service of U.S. hegemonic world dominance.

Official U.S. condemnation of Nazis, fascists and extremists is just American public relations rhetoric. Evidently, the condemnation has no credibility in terms of objective reality.