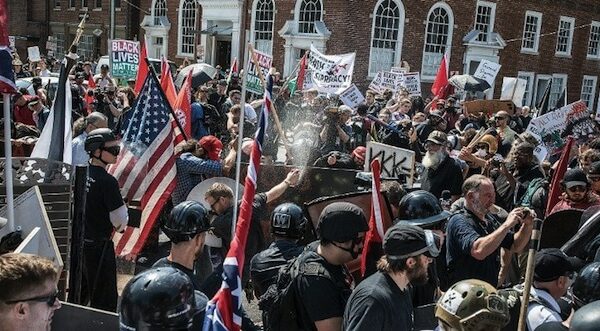 One death and many more injured later, the “Unite the Right Rally” to protest the removal of General Robert E. Lee’s statue became firmly planted in popular consciousness well after the band of white nationalists dispersed. Conversation regarding the significance of the demonstration has continued over a week after the incident. The demonstration comprised of hundreds of white nationalists from a number of organizations, all assembled to defend white power. Their opponents, which consisted of everyone from anarchists and communists, confronted the white nationalist mob head on. And like a tidal wave, the media narrative that a white supremacist takeover is flooding the shores of the US has many watching the scene from afar wondering what to do from here.

However, white supremacy is not a tidal wave. And it isn’t a lurking storm that seeks to wreak havoc on the shores of the US either. That happened centuries ago, when English colonizers laid their claim to the North American mainland circa the mid to late 17th Century. Virginia was the birthplace of the white race. It was in this settler colony that the white racial category was invented in order to rescue a crumbling tobacco capitalist industry from ruin. The early colonial-capitalist relations of debt bondage united African and European laborers and landowners in rebellion against the colonial administration, prompting the ruling elite to give Europeans the right to escape the harshest form of bondage that was ascribed to newly subordinate Africans laborers.

“Virginia was the birthplace of the white race.”

White supremacy continued to shape colonialism in North America, as the enslavement of Africans based on racial inferiority was found to be hugely profitable. The US was able to rapidly advance the productive capacity of the capitalist system in large part because of the free labor of Africans and the stolen land of First Nations people. White superiority went on to justify imperial expansion in the West and South even after the end of formal chattel bondage. Black labor remained so terrorized and dispossessed by white rule that class solidarity never could take hold in the US mainland. This pressing problem has yet to be resolved, as wars rage on both at home and abroad in the name of the first empire to be founded on white capitalist rule.

When placed in proper historical context, the events in Charlottesville are hardly surprising. White supremacist terror is a critical piece of the US imperialist machine. A few hundred white nationalists protesting a perceived loss of white privilege is a reflection of institutional realities that have yet to garner a similar reaction among large sections of the US populace. Some of these realities include the daily murders of Black Americans at the hands of police, a gaping racial disparity in the wealth distribution of US society, and an incarceration regime that warehouses more Black people than the total number of people imprisoned in any single nation in the world. Structural racism is the root of all racist ideas and warrants just as much, if not more, attention than the gathering of white nationalists.

“White superiority went on to justify imperial expansion in the West and South.”

A radical orientation to US imperialism’s state machinery has become all the more necessary in these dangerous times. The FBI has been infiltrating white power groups for years, ostensibly to investigate the presence of such groups in law enforcement. However, the FBI’s role in white nationalist formations may be more insidious. It is now a matter of public record that many of the terror plots uncovered by the FBI were orchestrated by the agency in the first place. This begs the question as to what influence the state has over white power groups, especially in light of US government support for Nazis in Ukraine and similar forces all over the world.

Popular consciousness of the relationship between the state and white supremacy has been clouded by an anti-Trump movement led by a significant section of the ruling elite in Washington. This movement has grossly distorted the threat of a fascist, white power takeover of the US political system. The Democrats in particular have equated white nationalism with the Russian Federation and Putin with Trump. Yet white supremacy is not the primary question on the order of the day for the ruling elite. Rather, the ruling class raises the specter of white nationalism as a proxy to enlist a growing number of the US population on the side of war with Russia and to cover up any notion that the Democratic Party lost the election is due to its own undesirable qualities. In this period of crisis, US imperialism requires white nationalism to fester and grow so that its two-party system remains a legitimate political option. This is why Washington may officially condemn “hate” but does nothing about the presence of white nationalist groups in regions across the country.

“The ruling class raises the specter of white nationalism as a proxy to enlist a growing number of the US population on the side of war with Russia.”

This is not to say that white supremacy does not pose an immediate and violent threat to oppressed people, especially Black people. White supremacist groups possess a complex relationship with the US state. They enforce white supremacist terror with protection from the state yet expose the public to the nation’s racist roots all at the same time. The social relations behind the thousands of lynchings that occurred in the late 19th and early 20th century remain intact. Only this time, the hoods are (mostly) off and these groups have reduced in size compared to the number of heavily militarized police occupation forces that exist across the US.

Powerful movements armed with organized Black self-defense forces made the weakening of organized white nationalism possible. Beginning in the 1960s, it became untenable for the ruling class to openly espouse support for white vigilantes. That doesn’t mean white terror ceased to exist into the present day. The state merely shifted the social control of Black America more heavily onto formal channels of the state. Prisons were erected and a steady stream of federal funds and military weaponry sent to state and local police departments. It was through these reforms that the US state was able to legitimize state violence against Black America as a matter of national security. Ironically, such conditions laid the basis for white nationalist organizations to regain strength.

“The state merely shifted the social control of Black America more heavily onto formal channels of the state.”

Black August is upon us and few others understood white nationalism and fascism better than the immortal George Jackson. Jackson studied the ideas of the “honky” in order to unite prisoners of all colors in a common struggle against state authorities. His work Blood in My Eye analyzes the system of fascism in the context of US political economy. He concludes that for Black America and much of the world’s people, fascism had arrived. The year was 1970-71, and the Black Panther Party that Jackson joined from within prison was being attacked on all sides by the US state. That same state was also waging bloody wars abroad, most notably in Vietnam. Jackson defined fascism as the last reform stage of US imperialist development; a stage characterized by the ruling class’s inability to allow legitimate resistance to exist without waging a total war in response.

The point here is not to debate the definition of fascism here, but to achieve a greater degree of clarity about the current systemic crisis of imperialism. There is no greater disservice to the struggle against fascism and white supremacy than to confine it to the racist ideas of bands of organized whites Americans. These bands are not a class and cannot take state power in any real way independently. Their existence is buttressed by a system of exploitation ruled over by a tiny class of profiteers that ultimately controls the state apparatus. It is here where the real threat of fascism lies.

“No party in Washington is actively fighting to use the Justice Department to defend Black Americans from being murdered by the police or imprisoned for life in geriatric gulags.”

This threat possesses a bipartisan character. The road to fascism has been paved by the existence of so-called US democracy itself. Every actor in Washington has played a part in the consolidation of state power in the hands of monopoly capital. No state opposition can be found to the fleecing of Black wealth and the wages of the poor generally. Washington is also united when it comes to war with Korea and drone strikes in Pakistan. And no party in Washington is actively fighting to use the Justice Department to defend Black Americans from being murdered by the police or imprisoned for life in geriatric gulags.

The political debate around the question of white supremacy must become more nuanced. US imperialism is in crisis and a significant portion of the ruling class hopes to keep the struggle against white supremacy completely separate from its class roots. The system’s goal is to steer the struggle against white nationalists toward a quest to purify the US of its “hateful ideas.” However, exploitation and state violence does not emerge out of hate alone, if at all. Such relations are the product of a system of class rule. White supremacy wouldn’t exist if it were not profitable, thus making the system of capitalism at the root of private profit an indispensable target in the struggle for a new world all together.