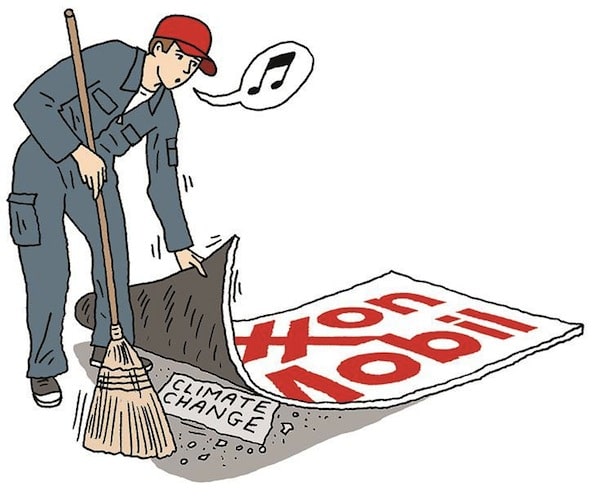 All Exxon Mobile worries swept under the rug.

First, ExxonMobil misled the public about climate change for years, even as its research echoed the growing scientific consensus that global warming is real and caused by human activity. Then, while various states attorneys-general launched investigations of whether Exxon deceived shareholders and the public to protect its profits, the Wall Street Journal published 21 opinion pieces about current or potential Exxon investigations, all of which were critical of government entities investigating Exxon.

We now know, thanks to a study by two Harvard University researchers, Geoffrey Supran and Naomi Oreskes, that Exxon acknowledged that climate change is real and human-caused in 83 percent of peer-reviewed papers and 80 percent of internal documents. Yet, 81 percent of editorial-style advertisements it placed in the New York Times from 1989 to 2004 expressed considerable doubt.

Available documents show a discrepancy between what ExxonMobil’s scientists and executives discussed about climate change privately and in academic circles and what it presented to the general public. The company’s peer-reviewed, non-peer-reviewed, and internal communications consistently tracked evolving climate science: broadly acknowledging that anthropogenic global warming (AGW) is real, human-caused, serious, and solvable, while identifying reasonable uncertainties that most climate scientists readily acknowledged at that time. In contrast, ExxonMobil’s advertorials in the NYT overwhelmingly emphasized only the uncertainties, promoting a narrative inconsistent with the views of most climate scientists, including ExxonMobil’s own. This is characteristic of what Freudenberg et al term the Scientific Certainty Argumentation Method (SCAM)—a tactic for undermining public understanding of scientific knowledge. Likewise, the company’s peer-reviewed, non-peer-reviewed, and internal documents acknowledge the risks of stranded assets, whereas their advertorials do not. In light of these findings, we judge that ExxonMobil’s AGW communications were misleading. (references omitted) 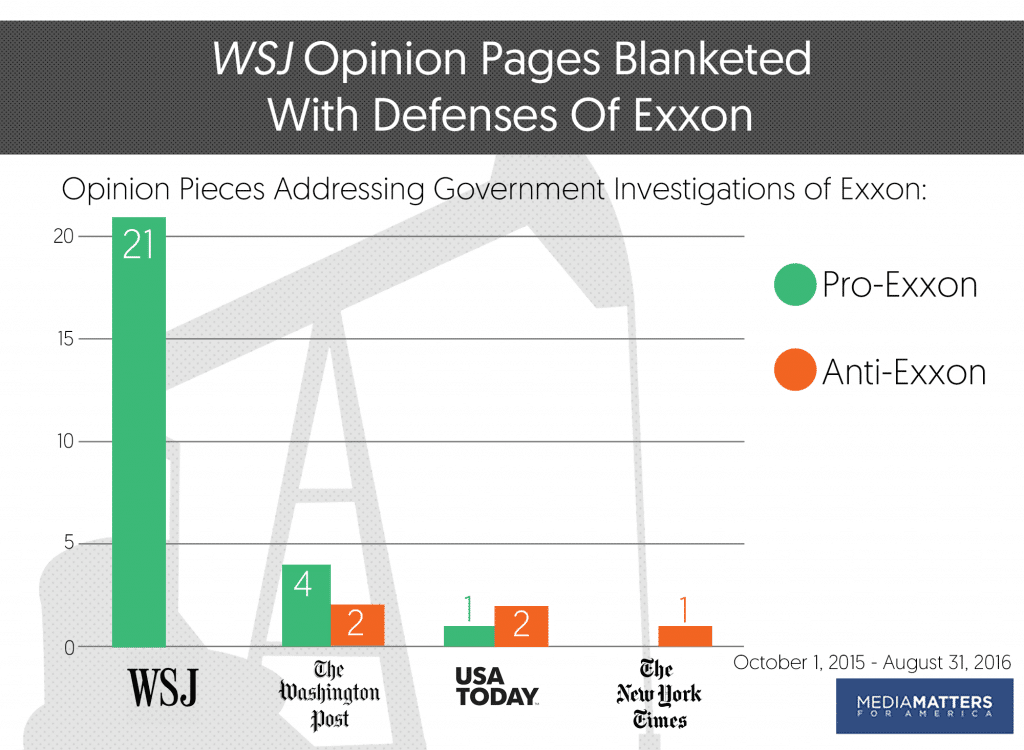 And according to Media Matters (in a study of opinion pieces published between October 2015 and August 2016), the Wall Street Journal:

Has yet to publish a single editorial, column, or op-ed in support of investigating Exxon’s behavior, and many of its pro-Exxon opinion pieces contain blatant falsehoods about the nature and scope of the ongoing investigations being conducted by state attorneys general.

By comparison, the Washington Post published six opinion pieces about government investigations (4 in favor of Exxon, 2 against), USA Today published three (1 for, 2 against), and the New York Times published one (against).

Clearly, in the case of climate change, both ExxonMobil and the Wall Street Journal have been engaged in pretty slick maneuvers in order to protect their profits.