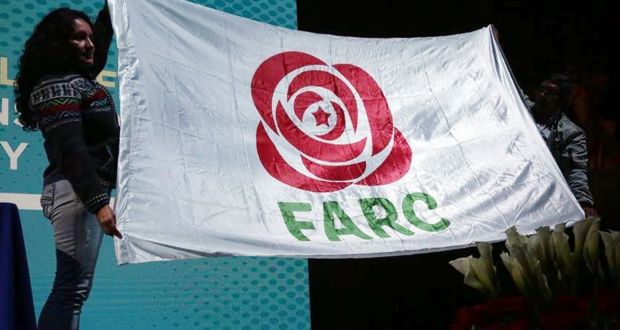 Alternative Communal Revolutionary Forces (FARC). This is the name of the new political party with which former Colombian guerillas are looking to enter the country’s political arena, maintaining the initials they used fighting in the mountains, plains, and jungles for more than 50 years, as the Revolutionary Armed Forces of Colombia. 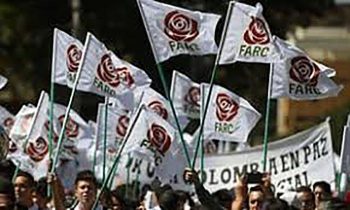 The red rose and initials of the new Alternative Communal Revolutionary Forces identify the party which has been established by Colombia’s major former guerilla army. Photo: The Guardian.

The name chosen goes beyond formalities and sends a clear message about the group’s objectives following the historic peace agreement signed in Havana last year.

The guerrillas’ first Congress since moving to civilian life, held last week in Bogotá, established not only the new organization’s name, but also its structure and the strategy to be followed in its first incursion in legislative and Presidential elections—coming in 2018.

It was the debate on the name, however, that made headlines, since some believed that, with the end of the armed conflict, it was time to leave the old initials behind and opt for something new. Nueva Colombia (New Colombia) and Esperanza Popular (The People’s Hope) were on the table, but in the end neither garnered much support. The majority decision was to keep the initials and only change their meaning. (Fuerza Alternativa Revolucionaria del Común).

For some in the country, the initials bear a strong connection with death and suffering, but the former guerillas chose to maintain a symbol of their revolutionary struggle which has accompanied them since the days of Marquetalia, when the group was formed under the leadership of Manuel Marulanda.

A strong message is being sent that they are not abandoning the revolutionary objectives for which they undertook a 50-year armed struggle, but rather intend to reach them through other means. The red rose they chose as a logo follows the same logic.

They hope that peace—to the degree that it has helped heal the wounds of war—will temper the stigma that has developed over years of negative propaganda.

And the march along this path has already begun.

On September 1, the more than 1,200 former guerillas attending the Congress as delegates gathered in Bogotá’s Bolívar Plaza. For many, it was the first time they were able to visit the capital without being obliged to hide or evade authorities. And it was also the first time residents of the city had seen so many FARC members together in one place.

The Congress that lasted more than a week, established that the party seeks to attract diverse revolutionary and liberation currents, including those adhering to Bolivarian thought, and will have community work among its priorities.

In fact the “común” of the new name (translated as communal) is also a reference to the work cells in settlements and neighborhoods deep inside Colombia, where the destiny of the group will be determined, despite the fact that for the coming legislative term, the group is guaranteed at least ten seats, as part of the peace accords.

In addition to having their own organization and leadership—headed by Timoleón Jiménez, but distributed in a collective fashion, very similar to the former secretariat—the FARC looks to create a broad coalition of social movements and progressive parties to guarantee the fulfillment of the peace agreement and neutralize the warmongering threats of the far right and paramilitaries.

Although it faces a difficult road ahead, the Alternative Communal Revolutionary Forces emerges at a moment when traditional parties are thoroughly discredited. According to the last Gallup poll conducted, the FARC has greater possibilities in the upcoming elections than any other national political group. Although this fact in itself does not guarantee an expedited route to the Nariño Presidential Palace, it is an indication of the new times in Colombia, which are arriving accompanied by a name with a long history.