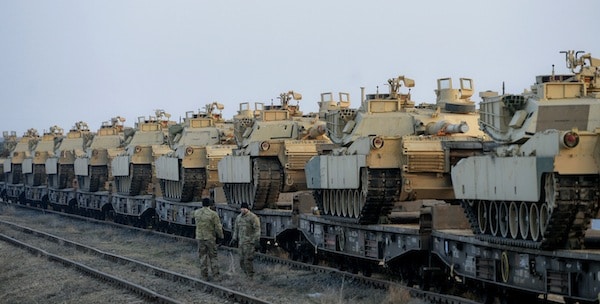 Servicemen of the “Fighting Eagles” 1st Battalion, 8th Infantry Regiment, walk by tanks that arrived via train to the US base in Mihail Kogalniceanu, eastern Romania, Tuesday, Feb. 14, 2017. Five hundred U.S. troops began to arrive in a Black Sea port in Romania with tanks and hardware to bolster defense in this East European NATO nation. (AP Photo/Andreea Alexandru)

Where were the pundits and elected lawmakers who complain about the cost of providing healthcare to all Americans when the Senate voted to spend $700 billion on the military?

Many critics were raising this question Monday after the Senate—in what was portrayed as yet another indication of bipartisan support for endless war —overwhelmingly approved the 2018 National Defense Authorization Act (NDAA), which will dump a larger sum of money into the military budget than even President Donald Trump asked for while also authorizing the production of 94 F-35 jets, two dozen more than the Pentagon requested.

Passage of the NDAA—which this year approves a $700 billion defense budget, an annual increase of $80 billion—is something of an automated process in Washington, one that often flies under the radar and garners little opposition.

However, with support for Medicare for All and free public college tuition soaring, many are calling attention to the hypocrisy of pundits who yell about the costs of single-payer healthcare providing debt-free higher education while remaining entirely silent about the war budget.

Adam Johnson, a contributor to Fairness and Accuracy in Reporting, argued that the explanation for this double standard is simple: America’s dominant political class and mainstream commentators view exorbitant military spending as a given.

“Note: neither Vox or WaPo will have pundits lament over ‘where the money will come from’ for [the Department of Defense],” Johnson wrote on Twitter following the Senate’s vote, implying a reference to those who slammed Sen. Bernie Sanders (I-Vt.) Medicare for All bill on budgetary grounds. “Money for war just is. Like the tides.”

note “where will the money come from?” deficit trolls will be silent on this $700B defense spending bill–a roughly 20% increased from 2016

Others echoed Johnson, noting that many U.S. reporters are not “programmed” to question military spending—a stark contrast to their reflexive skepticism of ambitious healthcare proposals or free public college tuition plans.

We’re constantly told the US “can’t afford” single-payer health care, while 89% of senators vote for $0.7 trillion for Pentagon warmongering

As The Intercept‘s Alex Emmons notes, the implications of this persistent refusal to question the bloated military budget are massive.

Emmons observes that the annual increase in spending alone—$80 billion—would be more than enough to “make public colleges and universities in America tuition-free. In fact, Sanders’ proposal was only estimated to cost the federal government $47 billion per year.”

“If the additional military spending over the next ten years instead went to pay off student debt,” Emmons added, “it could come close to wiping it out entirely.”

Instead, as Monday’s vote revealed, a bipartisan majority of U.S. senators appear content to continue unquestioningly pouring money into a military budget that already far exceeds spending of any other nation in the world.

Here are the 89 senators who voted in favor of the measure. 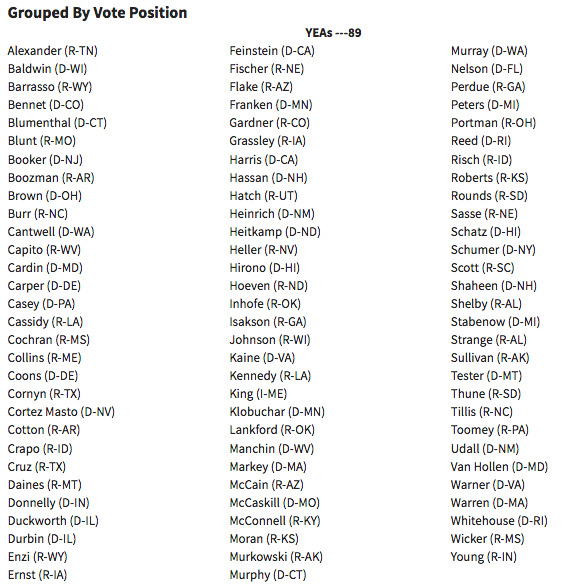