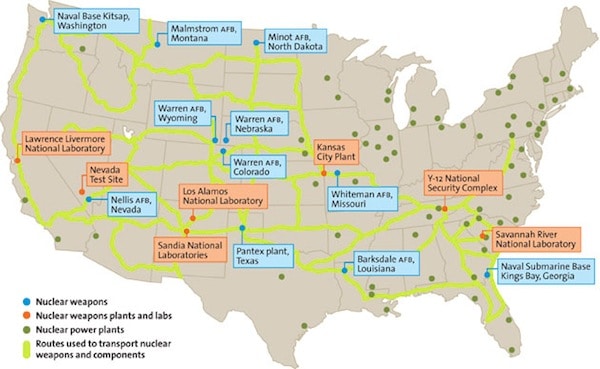 Because nuclear weapons are so destructive, the goal must be to eliminate—and not just minimize—the risk of nuclear war, which will require eliminating nuclear weapons.

Until then, it is essential that nations with nuclear weapons minimize both the risk and consequences of a nuclear war.

For example, climate scientists using the latest climate models find that if India and Pakistan each used 50 of their weapons against the other’s cities, fires would inject so much soot into the atmosphere that the global climate would be affected for a decade. The decreased sunlight and lower temperatures would result in lower agricultural productivity and could lead to the starvation of over 1 billion people. This would be in addition to the people directly killed by the weapons.

Policy-makers and military officials often refer to the US nuclear arsenal as “our deterrent,” as if it were some sort of disembodied force rather than actual weapons. A “deterrent” is obviously a good thing, whereas “nuclear weapons” are more problematic. So, let’s take a look at what this “deterrent” actually consists of.

We have a new web graphic that displays all the US nuclear weapons. It provides a step-by-step visualization of the weapons the US deploys on land-based missiles in underground silos, on submarines, and on aircraft. All of these 1,740 weapons are ready for use.

But that is not all. The graphic then adds in the weapons the US keeps in storage for potential future use.

It all comes to a whopping 4,600 nuclear weapons.

Take a look—you can find more detail about the arsenal on the final page by hovering over each dot.

Policy is what determines the risk of nuclear war.

As the graphic notes, the US keeps its land-based missiles on hair-trigger alert. Why? To allow the option of launching all these weapons in response to warning of an incoming attack from Russia. The warning is based on data from US satellites and ground-based radars, which is processed by computers.

No problem there, right? Wrong—not surprisingly, there have been false alarms in the past. Even more troubling, it takes only some 25 minutes for a missile to travel between Russia and the US. By the time the data has been analyzed, the president has about 10 minutes to decide whether or not to launch US missiles.

Which brings us to the next issue highlighted by the graphic: the president has the sole authority to use the 1,740 deployed nuclear weapons—meaning he or she can order an attack of any kind without the input of anyone else. Unless there is reason to think the president is incapacitated (e.g., drunk), the military is obligated to follow orders and launch.

The US could reduce the risk of nuclear war by changing these three policies—by removing its land-based missiles from hair-trigger alert and eliminating launch-on-warning options from its war plans; by requiring the involvement of other people in any decision to use nuclear weapons; and by adopting a no-first-use policy. To reduce the potential consequences of war, it would need to dramatically reduce its arsenal.

And taking these steps would still leave the US with a strong “deterrent.”