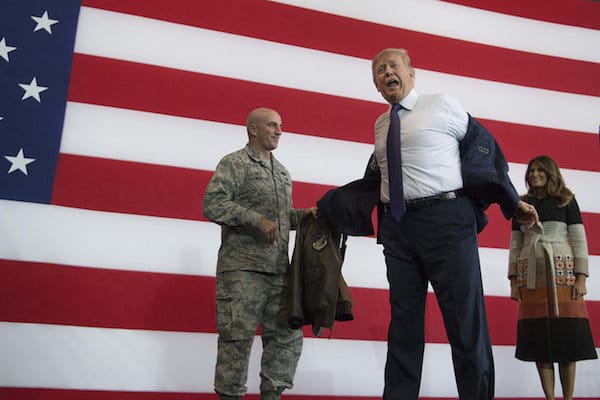 US President Donald Trump (C) takes off his suit jacket to receive a bomber jacket from the US Pacific Air Forces as First Lady Melania Trump (R) looks on during an event to speak with US military personnel at Yokota Air Base at Fussa in Tokyo on November 5, 2017. Trump touched down in Japan on November 5, kicking off the first leg of a high-stakes Asia tour set to be dominated by soaring tensions with nuclear-armed North Korea. / AFP PHOTO / JIM WATSON (Photo credit should read JIM WATSON/AFP/Getty Images)

A draft of the 2018 Nuclear Posture Review leaked to the Huffington Post indicates that the White House is planning changes to the U.S. nuclear arsenal and its nuclear-use policy that would increase the risk that nuclear weapons will be used.

Below is a statement by Lisbeth Gronlund, senior scientist and co-director of the Global Security Program at the Union of Concerned Scientists.

The new policy laid out in this document is dangerous on multiple levels. It’s a shocking and explicit rejection of decades of bipartisan consensus to reduce the role and number of U.S. nuclear weapons, which led to large-scale reductions in U.S. and Russian nuclear stockpiles and reduced the risk of nuclear use.

This new policy would make nuclear war more likely and undermine national security. It would expand the range of scenarios under which the president could decide to use nuclear weapons. It intentionally lowers the threshold for the use of nuclear weapons by calling for the development of several new types of more ‘usable’ nuclear weapons, including one that could be deployed on submarines in the near future. It also calls for tighter integration of U.S. nuclear and conventional forces, which deliberately blurs the line between them and eliminates a clear nuclear firewall.

All of this comes on top of an existing plan to rebuild the entire U.S. nuclear arsenal at a cost of more than $1.2 trillion over the next 30 years. At a time when the majority of nations are calling for reducing the role of nuclear weapons, this plan justifies new weapons and uses for them and is a dramatic step backward.

Every U.S. president since the end of the Cold War has explicitly reduced the role, the types and the number of U.S. nuclear weapons. This leaked draft lays out a policy that does exactly the opposite. It would increase the risk of nuclear use and reduce national security.”