There is a lot of confusion about how many excess cancer deaths will likely result from the 1986 Chernobyl accident in Ukraine.  As we see below, 70,000 and 35,000 are reasonable estimates of the number of excess cancers and cancer deaths attributable to the accident.

Much lower numbers of cancers and deaths are often cited, but these are misleading because they only apply to those populations with the highest radiation exposures, and don’t take into account the larger numbers of people who were exposed to less radiation.

Perhaps the most authoritative report on the consequences of Chernobyl is Chernobyl’s Legacy: Health, Environmental and Socio-economic Impacts, released by the UN-sponsored Chernobyl Forum (September 5, 2005). According to this report (p. 15):

The international expert group predicts that among the 600 000 persons receiving more significant exposures (liquidators working in 1986-87, evacuees, and residents of the most ‘contaminated’ areas), the possible increase in cancer mortality due to this radiation exposure might be up to a few per cent.  This might eventually represent up to four thousand fatal cancers in addition to the approximately 100 000 fatal cancers to be expected due to all other causes in this population.  Among the 5 million persons residing in other ‘contaminated’ areas, the doses are much lower and any projected increases are more speculative, but are expected to make a difference of less than one per cent in cancer mortality.

Roughly 20% of people die of cancer, so we would expect a million fatal cancers in a population of 5 million.  A one percent increase would translate into 10,000 additional cancer deaths, so, according to this report, there would be fewer than 10,000 excess cancer deaths among those in the contaminated areas.  These deaths would be in addition to the 4,000 fatal cancers among evacuees, liquidators (clean-up workers), and those in the most contaminated areas.

Because of this report, people frequently cite “4,000” as the number of eventual excess cancer fatalities.  However, by limiting its analysis to people with the greatest exposure to released radiation, the report seriously underestimates the number of cancers and cancer deaths attributable to Chernobyl.  The effects of the radiation were not limited to the “contaminated” areas but would be felt in Europe and beyond.

The current understanding of the relationship of cancer to radiation is that the risk of cancer increases linearly with dose and that there is no safe amount of radiation.  This understanding is represented by the “Linear No-Threshold” (LNT) model of cancer.

We can estimate the number of additional cancer deaths using data from several publications of the United Nations Scientific Committee on the Effects of Atomic Radiation (UNSCEAR), which give estimates of the radiation exposure from the accident.  Unfortunately, the information is not all available in one publication.

According to the Committee’s 1993 report Sources and Effects of Ionizing Radiation (p. 23):

The collective effective dose committed by this accident is estimated to have been about 600,000 man-Sv.

(A sievert, or Sv, is a measure of radiation dose that takes into account the biological effects of different types of radiation.)

From Appendix D of the 2008 UNSCEAR report:

We can relate the collective effective dose received in these various areas to the number of excess cancers and cancer deaths using data from Table ES-1 of the 2006 National Academy of Sciences report Health Risks from Exposure to Low Levels of Ionizing Radiation: BEIR VII Phase 2 (p. 15), which I reproduce below: 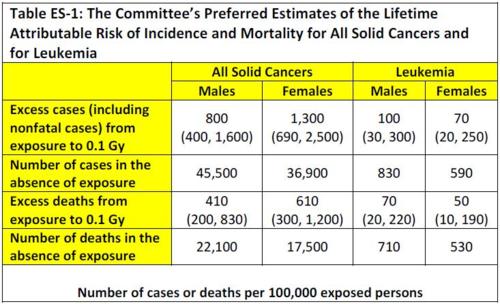 The numbers in parentheses are “95% subjective confidence intervals,” which the report states

For gamma and beta radiation, which are of interest here, 1 Sv = 1 Gy.  Assuming an equal number of males and females in the affected population, we see that the expected incidence and mortality of solid cancers and leukemia are 0.1135 cancer cases and 0.057 cancer deaths per Sv.

The estimated collective doses and the health consequences for different areas are shown in the table below. 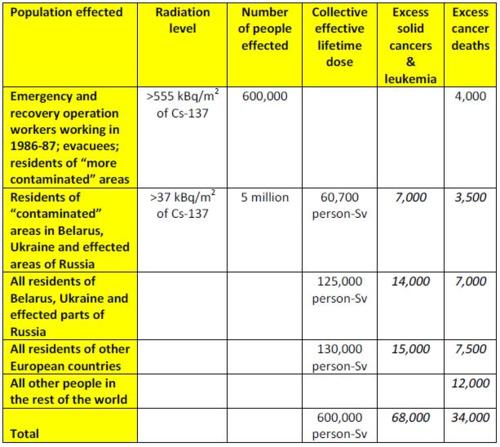 Table 2: Numbers in italics are calculated.  Values in the first unshaded row are from Chernobyl’s Legacy.  The number in row 5 is found by subtracting rows 1-4 from the Total in row 6.

Note that because exposure only increases the probability of developing cancer, in general no given cancer can be attributed to Chernobyl.  Moreover, because these additional cancers will be distributed among hundreds of millions of people, they will not be discernable among all the other cancer cases.  (Table ES-1 indicates that, on average, about 42% of people have cancer at some point in their lives, and about 20% of people die of cancer.)  However, the large increase in thyroid cancers among children in Belarus, Ukraine, and Russia following the accident clearly indicates that it was the cause of the increase.

Dr. Lisbeth Gronlund is a senior scientist and co-director of the Global Security Program at the Union of Concerned Scientists (UCS) in Cambridge, Massachusetts and a research affiliate in the Program on Science, Technology, and Society at the Massachusetts Institute of Technology (MIT).  This article was first published in the UCS’s All Things Nuclear blog on 6 April 2011; it is reproduced here for non-profit educational purposes.