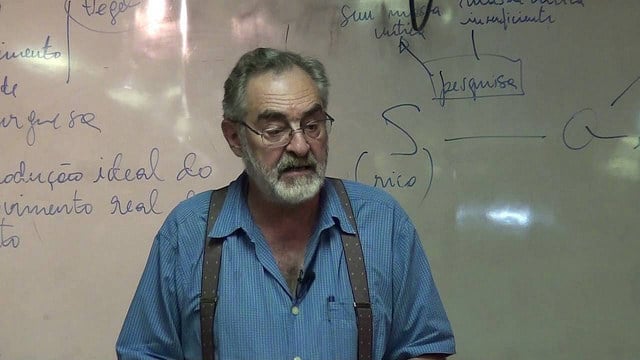 “Marx was not a profet nor a creator of uthopias, he was a rigorous theoricist” claims the professor / Credit: Youtube

The work of Karl Marx, Capital, considered “the Bible” of the revolution, was first published 150 years ago. Many political and ideological battles are fought until this day in the name of the German intellectual and his biggest work.

In an interview with Brasil de Fato, the emeritus professor of the Rio de Janeiro University, José Paulo Netto, who describes himself as a communist, demystifies the work.

Netto defends the content of the book insofar as it is a “projects of analysis that must be systematically developed”. He also highlights the main points of analysis that Marx established in the book, such as the successive crises of capitalism as opportunities for social change, of the power of class consciousness of workers, and finally, about the issues of race and gender, which are dismissed as “postmodern” by many marxists who currently analyze and debate the issue of class struggle.

Juliana Gonçalves: Where do you think the importance of Capital lies?

José Paulo Netto: The reason why Marx’s work is a classic is, to my understanding, the fact that it focuses on the social aspect of capitalist economic production and reveals its intrinsical contradictions, which allowed him to elaborate a theory of the genesis, constitution and dynamics of bourgeois society. After Marx’s work, no other scientific construct was able to explain the objective conditions that underlie the level of diversification and complexity of our society with such historic and analytical rigor.

What Marx offers us in Capital (specifically in the first book, which lays out the groundwork) is the theory that expresses the essential tendencies of the historic development of what we call capitalism.

In his research, which was based on Hegel’s dialectics, Marx uncovered the fundamental mechanism that underlies the bourgeois society: the exploitation of work by capital.

Over the century and a half that has transcurred after the publication of Capital, the social and economic organization of our world has changed profoundly: 21st-century capitalism is not the same as 19th-century capitalism. But capitalism, by definition, can only be based upon the exploitation of work. There’s no capitalism without the exploitation of work by capital. Marx was not a prophet nor a creator of utopias. He was a rigorous theoretician and the essence of his discoveries is still relevant and necessary to understand contemporary society.

What are the main concepts elaborated by Marx in his Capital?

After an exhaustive investigation, Marx proved in this work that:

I have observed that contemporary capitalism is different than the capitalism that Marx studied. Throughout the first few decades of the 20th century, the regime of capital experimented significant changes. But specifically since the 1970s, changes became more substantial, and began to be explicitly commanded by capital while the working class played a defensive role.

So the social and historical panorama became substantially different from what Marx saw.

However, in relation to the processes directly linked to the economic and political organization of contemporary society, I believe Marx has plenty to offer. The world dynamic dictated by mega-corporations is impossible to explain without revisiting the chapters of Capital that explain the tendencies towards concentration and centralization of capital, towards the planetarization of capitalism (which became known as “globalization”) and towards financialization. The chronic problem of unemployment, in all of its forms, and its consequences on the lives of millions of men and women, is only intelligible if we recur to what Marx called the “general law of capitalist accumulation”.

Is it pertinent to read Marx in order to understand and react to the recent threats to workers’ rights, such as the new labor laws passed in Brazil?

Marx was not a prophet nor a visionary, as I said. His work is marked by its historical context and a series of problems that emerge from current order of capital, weren’t and couldn’t have been analyzed by him.

Marx’s Capital is not a Bible nor a cookbook: it is a project of analysis that must be systematically developed. The issues indicated in the question were not analyzed directly nor conclusively. But the attention of modern Marxists is focused on useful and clarifying approaches, which proves that Marx’s method of analysis is still valid when approaching modern capitalism.

Can you elaborate on Marx’s conception of the importance of the crises of capitalism and how workers must interpret them?

Capital is the result of decades of research and presents a rigorous analysis of the process of constitution and development of the order of capital. From this analysis, Marx extracted the understanding that the economic crises are a necessary component in the dynamic of capital. The crises express the contradictory character of the movement of capital: they are not just signs of a temporary “malfunction”, but a constitutive part of the rule of capital in social life. That is to say, there is no capitalism without crises. To my understanding, these periodic or cyclical crises of capitalism are considered by Marx to be the result of economic derivation, so to speak, they are “more capitalism”. What a bigger crisis (a systemic, structural crisis) can offer workers is the possibility to find and implement a political solution. While the “more capitalism” alternative can only mean a radical restructuring of the political organization, which suppresses political power of workers and the possibility of revolution.

Marx was more than a theoretician, he was also a militant. To him, revolution would be a result of the action of workers.

Marx always understood revolution as a variable that results of the level of awareness of workers and vanguards. The “intellectual” Marx is indivisible from the “politically active” Marx. Between 1847 and 1858, he participated in the creation of the Communist League, during the elaboration of his main work he dedicated all of his strength to the International Workers’ Association. Throughout his life, he supported the slogan of the League (“workers of the world, unite!”), and he never doubted that the emancipation of workers would be a result of their own efforts. Marx never created barriers or separations among the struggles for reforms to improve the life conditions of workers and the struggles for revolution. It suffices to recall that he celebrated the reduction of working hours achieved by English workers. Furthermore, as a leader of the International Workers’ Association, he didn’t equate revolutionary actions only to insurrectional processes.

Some analysts say that gender issues have a minor place in Marx’s work. Do you agree?

It’s not something new. In academia, there’s a popular idea that Marx wasn’t concerned with culture and values, but a careful reading of his texts reveals that he cared about the sphere of human relations. Regarding Capital (which is not an anthropologic, much less a psychological treaty but a social theory built on the criticism of political economy), I suggest readers to examine the passion and anger with which Marx writes about the exploitation of women (and children) by the industrial system of his time to ponder whether he pays attention to the working woman. On the other hand, since 1848, when Marx praised George Sand and the suffragette movement gave its first steps, his political program for Germany claimed for universal voting rights for everyone over 21. Beyond Marx, another classic like Engels, in his work The origin of Family, Private Property and the State deserves a careful read, to prove that the 19th-century classics criticized patriarchy and defended women’s rights in a significant way.

Some analysts say there’s no capitalism without racism. Does Marx address this issue?

Those who are familiar with the Marxist analysis of the process of primitive accumulation understand the relevance of modern slavery, of the enslaving of African people and Latin American natives, to the creation of capitalism.

Marx was strictly opposed to any form of oppression, since human emancipation was the goal that gave sense and purpose to his life and work. Modern racism is a different problem. Although the roots of modern racism are found in the commercial expansion of the Western European civilization of the 16th and 17th centuries, it is directly linked with the consolidation of colonial empires throughout the 18th and 19th centuries and it reaches a peak with the emergence of imperialism. I believe the sentence is true because racism is a corollary of capitalism.

Recent feminist and black movements believe that race, gender and class are inseparable dimensions and are equally important in social constructs. Would you agree?

I will share an anecdote of my academic life. Around thirty years ago, professor Heleieth Saffioti, who has since passed away, and for whom I had a great deal of respect, exposed this very idea to me, and highlighted that it was necessary to carefully ponder the bases of this “tripod”. Upon my observation that the class dimension constituted the determinant factor, she smiled and argued: “to prove this, we need to research further”. I consider that the research that Saffioti proposed thirty years ago has been developed, but I’m not profoundly familiar with this current of analysis, and I’m a bit skeptical regarding research that weighs the magnitude of each component.