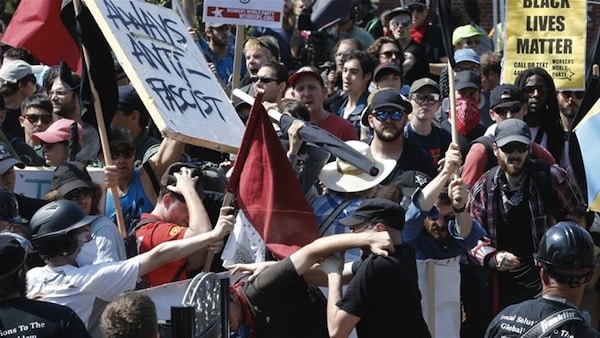 Counter demonstrators clash with white supremacist’s at the entrance to Emancipation Park in Charlottesville, US [Steve Helber/AP]

Recently, a fresh pathogen, which poses an urgent threat to public safety and discourse, has appeared suddenly on the political landscape. A batch of “liberals”, saddled with fragile sensibilities, have warned that liberty and lives are being threatened by ordinary, largely anonymous people seized with the duty to confront the ignorance and hate that Hurricane Donald and his abominable acolytes brandish routinely with impunity.

Predictably, the historically illiterate, ubiquitous members of the right-wing commentariat in America and beyond have attempted to tar the Antifa (anti-fascists) for resisting, and, if need be, defending itself against, the delinquents that march en masse at night with torches and mow down innocents in daylight with automobiles.

It’s an old trick: to negate real evil by manufacturing a phantom villain as a convenient foil or facile distraction.

Regrettably, but not surprisingly, this transparent rhetorical slight of hand is magnified repeatedly by an amnesiac establishment media that habitually finds and amplifies moral and intellectual equivalences where none exist.

In their attacks on the Antifa, these “liberals” have joined a pack of conservatives who – apart from accusing anti-fascists of fascism – howl on TV and elsewhere that climate change is a pan-scientific hoax, that Saddam Hussein certainly possessed weapons of mass destruction, that Iraq will eventually be “liberated”, and that Trump will indeed make America “great again”.

Given their unconscionable record, isn’t it about time these charlatans were disqualified permanently from passing judgment on the motives and conduct of others since they forfeited long ago any claim to enjoy any measure of seriousness or subtlety.

These days, it’s fashionable among the predominately white, male liberal intelligentsia to join the hysterical assault on the Antifa by insisting that, in effect, Danielsson’s and Menash-Schramm’s ‘violent’ ‘law-breaking’ must be condemned, rather than applauded, because it mirrors the malignant modus operandi of the fascists they defied.

Of course, the legion of unrepentant hucksters and their enablers will never recognise, let alone acknowledge, their complicity in trafficking in such calamitous lies and disastrous designs.

Women like Danuta Danielsson, the Polish-Swedish daughter of a Holocaust survivor who famously swatted her handbag at a gang of neo-Nazi skinheads strutting through a square inVaxjo, Sweden in 1985.

I challenge the smear merchants to impugn Danielsson and desecrate the memory of the anguish her family endured at the homicidal hands of Nazis by describing her and, in particular, her remembrance-fuelled, spontaneous act, as the personification of fascism.

The same challenge applies to Irmela Mensah-Schramm, a 70-year-old anti-fascist who has devoted the past 31 years to defacing neo-Nazi graffiti and propaganda in public spaces principally across Germany.

Mensah-Schramm’s act of resistance landed her in court, where she was fined for “vandalism” and ordered to stop. Her reply: she’s not going to stop, nor pay the fine.

These days, it’s fashionable among the predominately white, male liberal intelligentsia to join the hysterical assault on the Antifa by insisting that, in effect, Danielsson’s and Menash-Schramm’s “violent” “law-breaking” must be condemned, rather than applauded, because it mirrors the malignant modus operandi of the fascists they defied.

Even a cursory understanding of recent history reveals that individual and collective acts of resistance by progressive forces have traditionally been the target of these generic, hyperbolic attacks which are designed to delegitimise legitimate protest and marginalise the protesters.

Words and phrases like: “outsiders,” “agitators”, “provocateurs”, “Crypto-Marxists or fascists”, “bent on mayhem and violence” are the decades-old, cliched staples of this pedantic lot.

Liberals pining for a bucolic anti-fascist campaign will quibble in vain because while the vast majority of anti-fascists are peaceable, they will always be reduced to an ugly caricature by rabid reactionaries who customarily point an accusatory finger at everyone but themselves.

Still, in a windy, densely worded column dripping with condescension, one prominent liberal writer not only castigated the Antifa for squandering its “moral authority”, but claimed – without offering an ounce of empirical evidence in support – that neo-Nazis are “victims” of the exploitative corporate state too, thus requiring our sympathy and consideration.

Intended or not, this astonishing logic – such as it is – resembles Trump’s rambling, semi-coherent assertion that “many sides” were responsible for the violence that took Heather Heyer’s life in Charlottesville, Virginia in early August and that among the army of tiki-torch wielding anti-Semites were some misunderstood “fine people”.

Neo-Nazis are not “fine people”, nor are they “victims”. They are, aptly put, scum. There must be no equivocation, no obfuscation, no shading on this score from any quarter, at any time, for any reason.

To do otherwise is to provide succour to the philosophical descendants of genocidal murderers, who, given the opportunity, would relish enslaving and, once again, executing, wholesale, Jews, Muslims, Roma, homosexuals, the infirm, other vulnerable minorities and, yes, liberals.

Richard Spencer and his verminous brethren are, no doubt, chortling at the profoundly preposterous but increasingly popular media-propelled construct that the Antifa is as pathological as the fascists it reviles.

These are bizarre and dangerous times.