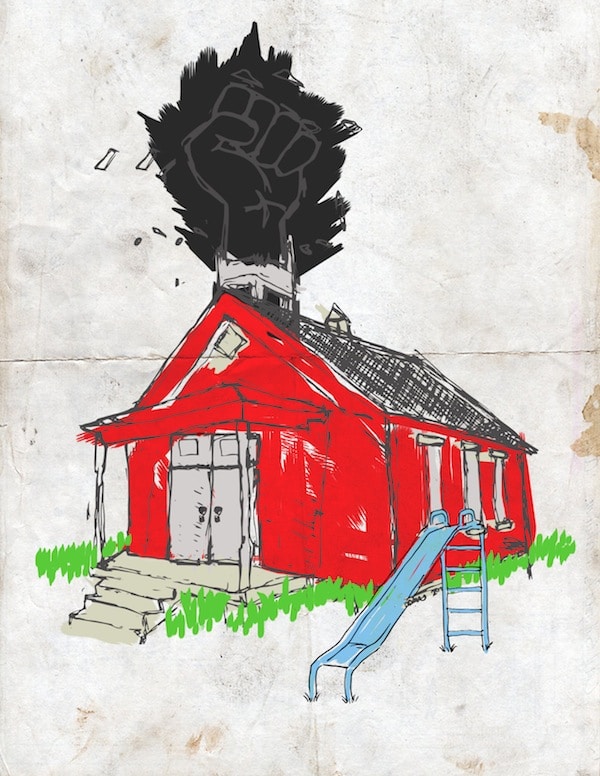 “How do you kill Mr. Phil and nothing happens?” According to parent Zuki Ellis, this is the question students at J. J. Hill Montessori Magnet School in St. Paul were asking just a few days into summer. On June 16, the Minnesota police officer who fatally shot Philando Castile, or Mr. Phil as students knew him, was acquitted on all charges. Castile worked as a cafeteria supervisor at J.J. Hill. He served as a role model for hundreds of kids, memorized the names and allergies of all 500 students, and greeted them with high-fives while they waited in line for breakfast.

As news of the verdict spread, Ellis and other parents spoke to the Huffington Post about the trauma their students were experiencing. One parent who also teaches at the school, John Horton, said, “Castile’s death would often come up in class. The children drew connections to Castile when learning about civil rights issues. They tried to make sense of Castile’s death in relation to a larger context of injustice. But for many . . . it still seemed senseless.” Horton went on to say that the kids’ struggle to make sense of the world reflected that of adults in the school who are also “still trying to work through” and process what happened.

Many teachers, parents, and students across the country may be feeling similarly as they re-enter schools this fall. As the school year ended and the summer began, story after story made it clear that in this society, Black lives don’t matter. In late May, a white supremacist stabbed University of Maryland student Richard Collins III at a campus bus stop just days before he was set to graduate. A few weeks later in Portland, two Black high school girls were targeted after school on a train by a white supremacist who took a knife to three intervening adults, killing two. In Seattle, Charleena Lyles, a public school parent and pregnant mother of four, was gunned down by police after she called them for help. And at the end of the summer, torch-bearing white supremacists descended on the University of Virginia campus ostensibly to protest the removal of a statue of Confederate general Robert E. Lee. The following day, met by large numbers of counter-protesters, these far-right racists responded with violence. Several viciously beat counter-protestor Deandre Harris — who worked as an instructional assistant in a special education classroom — while another drove a car into anti-racist demonstrators, killing 32-year-old Heather Heyer and injuring about two dozen others.

The racist rhetoric of the Trump administration has provided license for police and white supremacists to escalate their attacks on Black people and in other communities of color. As a result, many students across the country will likely be returning to the classroom this fall carrying the pain and confusion borne of the racist events of summer.

Unfortunately, from curriculum to discipline policies, too many schools reinforce racist messages and our systemic disregard for Black lives. From the Connecticut textbook that claimed slave owners treated enslaved people like “members of the family,” to the young Black girl in South Carolina who was thrown across the room by a school police officer for refusing to put away her cell phone, to the two young women in Boston who were kicked off their sports teams, banished from prom, and given detention for wearing their hair in braids, students are too often further traumatized by an education system that reproduces society’s inequities.

Meanwhile, the millionaires and billionaires who drive the corporate school reform movement claim that “no excuses” discipline and endless test prep will close the achievement gap between Black and white students. Yet these reforms have not led to any significant progress for Black students. In fact, this test-and-punish regime has forced the closure and further privatization of public schools in Black and Brown communities.

Instead, we need to demand investment in schools and the communities they serve, coupled with an anti-racist, pro-justice pedagogy and curriculum.

And if the assault on our public schools by corporate reformers wasn’t enough, the state assembly in New Jersey passed a bill over the summer that would require schools to teach children how to interact with police “in a manner marked by mutual cooperation and respect.” In a similar way to how high-stakes testing blames students and teachers for the problems facing public schools, this new law sets a dangerous precedent for who will be held responsible for deadly confrontations with police. Rather than make any effort to hold police accountable for their regular murder of Black and Brown people across the country, New Jersey legislators have chosen to blame children and their teachers for not properly “interacting” with the police.

In light of all this, how do we make our classrooms and schools places where our students of color feel safe, valued, and empowered? What can we do differently or increasingly to make Black lives matter in our curriculum, workspaces, and relationships? What can we do as teachers to fight and organize for a more just society? How do we challenge our unions and our districts to stand up for racial justice? And how do we help support students to be leaders in the fight against racism?

For one, we need to ensure that our curriculum teaches and values Black lives and anti-racist struggles. Educator Kara Hinderlie does this by teaching her kindergartners and 1st graders the simple concept that “Black is beautiful” [p. 20]. At the high school level, biology teacher Gretchen Kraig-Turner uses the story of Henrietta Lacks to discuss bioethics with students and explore the discrimination Black people faced and continue to face within the healthcare system [p. 34]. In social studies, Adam Sanchez and Jesse Hagopian critique current textbooks’ portrayal of the Black Panther Party and engage students in a mixer to learn how the party organized against police brutality and much more [p. 26]. From abolitionism to civil rights, the Black freedom struggle has been a catalyst for movements that have transformed this country for the better. Therefore, bringing anti-racist curriculum into our classrooms is both about helping Black students feel valued and connected to their learning, as well as about all of us learning from the central struggles for justice when injustice is regularly front-page news. As the current movement phrases it, “all lives will matter, when Black lives matter.”

We also need to make sure our schools support, encourage, and listen to Black and Brown staff members. We should also develop multi-school or districtwide networks where teachers of color can congregate to discuss issues that they face in schools. The pages of Rethinking Schools are another place where those topics can be discussed. In “Who Do I Belong To?” [p. 40] Natalie Labossiere explores some of the specific difficulties teachers of color face when working in predominantly white schools. Historic inequities and past racist policies have created a school system where the teaching staff of a school is typically whiter and wealthier than the students they teach. In a profession where most teachers leave within five years, it’s especially important we push school districts to recruit, hire, and support more teachers of color.

And most importantly, we need to transform our schools into sites of resistance to a system that devalues Black lives. Helping students start Black Lives Matter and other anti-racist clubs, putting on student and community forums, discussing with other teachers how to join the movement and taking collective action together, are necessary ingredients for resistance and transformation. Jesse Hagopian and Wayne Au, in “How One Elementary School Sparked a Citywide Movement to Make Black Students’ Lives Matter” [p. 11], show how teachers were able to pull off a districtwide Black Lives Matter action, challenging their union and district to take a stand that reverberated throughout the country. These are the kind of bold actions that we desperately need.

Michael Brown, Philando Castile, and Charleena Lyles were all victims of police violence — but they were also public school students, workers, and parents. If schools are ever to be truly “safe spaces,” we will need to build our capacity to defend each other. Whether from police, white supremacists, ICE agents, or climate disaster, this will require social justice work inside and outside the classroom. As we return to our schools this fall, we need to rededicate ourselves to building an education system and a society that values Black lives.