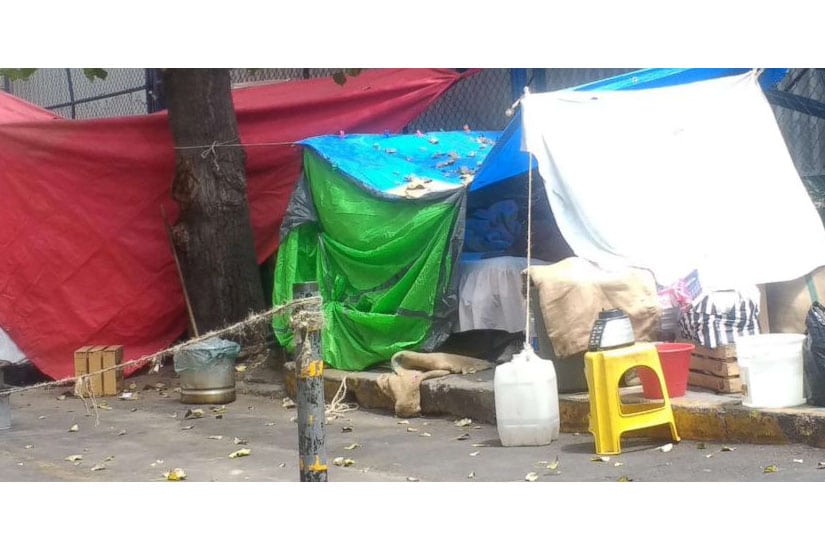 Occupants of building number 12 on Iturbide St. maintain an improvised camping site next to the property, after an earthquake, Sept. 24, 2017, in Mexico. The Civil Protection indicated to them that the building was no longer habitable.

Two earthquakes in Mexico in the same month; the most recent on the 32nd anniversary of the massive tremor that occasioned more than 10,000 deaths!  This time the direct toll in human life was much lower, because our society was better prepared and because the dynamics of the events spared us the most damaging shock waves. Nevertheless, the enormous gap between the official response and the social mobilization has once again graphically demonstrates the unwillingness and inability of the public sector to attend to its basic responsibilities to confront the tragedy of the most needy sectors of the population; this is exacerbated by its systematic discrimination against communities in regions whose elected official are members of opposition parties.  In contrast, throughout the country citizens groups (civil society) have spontaneously and generally with care organized their efforts and channeled resources to assist many of the neediest; unfortunately, some of the most serious affected regions are in remote areas with poor infrastructure and lack of communications.

In the Valley of Mexico, this same problem is manifesting itself in other ways.  Brigades of personnel from the government are being mobilized to organize rescue operations and channel resources to the numerous shelters that have been set up around the city. Here again, the spontaneous organization of local citizens groups and professional organizations is particularly evident—the virtual avalanche of supplies from the population in general arriving at the supply centers is extraordinary and heartwarming. It is a stark contrast to the testimonies from local citizens of numerous incidents of local government officials in the many parts of the country redirecting public resources to privileged political groups or frankly appropriating these products.

The stories of heroic efforts by local citizen groups is heartwarming.  One testimony by a neighbor in a housing complex in the southern sector of the Valley appears to be typical.

My sons and grandchildren have not stopped pulling pieces of concrete and bricks from the ruins and distributing food and water among the rescue brigades and neighbors, especially in the furthest removed and poorest of the townships in the Valley.

My wife is the heroine of the complex. She organized a supply center that now has 70 committed and enthusiastic teenagers involved in organizing the effort. They collected more than 21 tons [of] non-perishables, medicines, and household necessities, arranging for the transport to send them to the poorest smaller communities in neighboring states where official aid has still to arrive, with drivers and helpers to assure their safe delivery. Upon arrival, they joined the local brigades to help in the cleanup work.

Excess contributions will eventually be channeled to the National University’s massive supply center (based on voluntary citizen contributions) for further redistribution.

The contrast is repeating itself in other dimensions of life in the Valley.  Numerous buildings have collapsed or will have to be demolished because of serious structural damage (probably several hundred). It is already evident that many of these are newer buildings, certified under the reformed construction codes implemented after the earlier earthquake (1985). Citizen and journalistic reports of shoddy construction and systematic violations of structural norms are testimony to a voracious real estate boom that was transforming the urban environment and increasing official corruption.  As this problem becomes increasingly evident in the aftermath of the quake, several important groups of structural engineers and construction consulting firms are establishing a parallel system of inspection and certification for the population. They are incorporating the outpouring of student volunteers, training them to help them in the time-consuming task of evaluating the hundreds of buildings where cracks and falling pieces are sowing fear in the residents. This example makes it is clear that the deeply engrained culture of corruption is threatening all aspects of our life here in Mexico.

But the human toll is the most significant tragedy. The official death toll is already over 300, and is expected to rise as the demolition and cleanup operations continue. My neighbor helped me put this this into context:  Mexico’s death rate was about 5.3 per 1000 in 2016 for a population of 130 million, this translates in 670,000 deaths in 2016, of which about 62,000 were in Mexico City.  Of these, slightly more than 1,000 were homicides and about 1,800 due to traffic incidents, including pedestrians and passengers in public transit. Of the remaining deaths, some 30,000 can be attributed to poverty and extreme poverty: about 100 times the toll from the natural disaster and 30 times greater than the homicides.

Thus, when considering the human tragedy of this month’s events in Mexico, it is important to bear in mind that the poor and very poor of our society support the burden of “SILENT EARTHQUAKES” every day of the year, every year of their lives.

This is the heart of the problem we live with.

The “system”—with its tightly controlled means of communication, its public policies, the indifference in the face of poverty, and the disdain for the poor that isolates and marginalizes them for the simple fact of their being poor—denies them any process of social inclusion while labeling their protests and acts of resistance as “populist” or worse, has foreclosed the possibility of guaranteeing the same level of security for all. It is unwilling to guarantee a basic level of well-being for these groups, to assure an adequate education for all, to provide health services compatible with the level of development of this “middle income” country.

Mexico suffered two powerful earthquakes in September 2107. The first, with magnitude 8.2 took place on September 7. With its epicenter off the Pacific coast of southern Mexico, it caused damage mainly in the states of Chiapas and Oaxaca. The second took place on September 19 and had a magnitude of 7.1, with its epicenter about 75 miles (120 kilometers) southeast of Mexico City, damaged the surrounding area, including Mexico City.