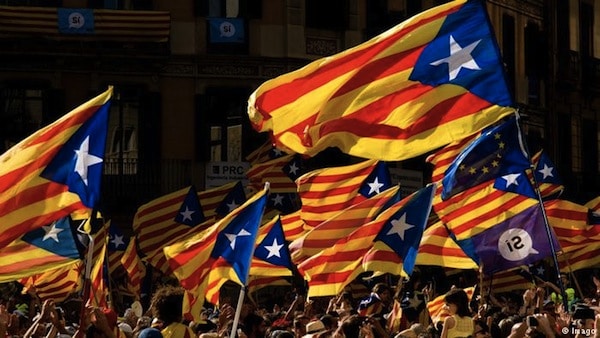 Sunday’s Catalan independence referendum delivered a landslide victory to supporters of Catalonia’s self-determination, with some 90 percent voting in favor of secession from Spain. Having been denied a spurious legitimacy by the Spanish constitutional court, which declared the vote illegal, democracy in Catalonia has instead found validation through the enactment of history by its people.

History, stretching back to the 1930s, also colored the authoritarian response of the right-wing and comically corrupt government of Spanish Prime Minister Mariano Rajoy. Rubber bullets and batons greeted peaceful civilians who sought to participate in a plebiscite which, Rajoy subsequently claimed, simply never happened.

Spain, a multinational state whose pantomime act as a unitary nation offends many and convinces few, has written its oblique suicide note in the blood of democrats. A government which considers itself the ultimate arbiter of constitutional verity has itself faced judgement from those it sought to disenfranchise. As it lurches from panicked self-preservation to hateful retaliation, the wider world cannot turn away.

In naïve quarters, much shock has been expressed that this is happening in a Western and ostensibly “liberal” democracy, where such ugliness is not meant to transpire. Those nations which have suffered from the historical legacies of European colonialism, from the enforced reality of globalised capitalism, and whose roots lie in the hard-fought achievement of self-determination, are not so sheltered.

Responding to the violence encountered by defiant Catalan democracy,Venezuelan President Nicolas Maduro did not equivocate: “Mariano Rajoy has chosen blood, sticks, blows, and repression against a noble people. Our hand goes out to the people of Catalonia. Resist, Catalonia! Latin America admires you.”

Given the controversies that have surrounded Venezuela’s efforts towards participatory democracy and constitutional reform, the contrast is striking. In Catalonia, we have seen an authoritarianism fuelled not by any attempted rewriting of the constitution, but in a fanatical adherence to its strictures, regardless of how unjust the consequences. The Spanish Government have sought national unity over moral dignity, and have lost both as a result.

Shamefully, others have been less forthright in their condemnations. Those who qualify reactions to oppression and violence with a disingenuous and unnuanced suspicion of nationalism are as useless as they are willfully deluded. Those features which socialists have historically feared from nationalist movements – irrationality and exceptionalism, conservatism and chauvinism, brutality and blood – were not embodied by those in Catalonia who marched, voted, and stood where others demanded they kneel.

Instead, the ghost of Franco found expression in the actions of a Spanish government that never fully exorcised him or the Falangist instincts he instilled. To watch unarmed civilians beaten by state-sanctioned paramilitary thugs and then argue that both sides share responsibility – that legality, however perverse, trumps justice – is to offer excuses for a fascism resurgent.

It has already become commonplace for hand-wringing commentators, wedded to the status quo and suspicious of change they cannot comprehend, to argue that Spain has reacted in its own worst interests; that instead of imposing a monstrous crackdown upon an as-yet-stateless nation, Spain’s defenders should have made a “positive” case for Catalonia to remain.

Yet when the first choice of the Spanish government is a policy of inhumanity, redolent with memories of Catalonia’s historical suffering, who could make such a case in good faith? Who could claim it even exists?

Elsewhere, others have found their own struggles reflected in the Catalan experience, and in consequence possess more informed perspectives. From my home in Edinburgh, I have seen supporters of Scottish independence take up the cause of Catalonia with a passion that been matched by their Irish and Basque counterparts, much to the bafflement of their many enemies.

The opponents of left-wing nationalism, when they have the rare decency to acknowledge that it exists, have no answer for the long-standing solidarity that exists between insurgent nations reaching for liberation in the 21st Century. If nationalist struggles are petty and insular, if they can never provide a vehicle for emancipatory struggle – as their critics would have us believe – from where does this internationalist solidarity originate?

One could argue it begins with a recognition that national sovereignty without international solidarity is untenable; that statehood and self-determination are means towards further political and economic emancipations, their potential limits yet undefined; that goodwill and mutual support between comparable national struggles are the only means by which a counter-hegemonic opposition to globalized capitalism can be built.

Those who doubt the radical potential of a sovereigntist movement should consider that Catalonia is, at the time of writing, conducting a General Strike, the scope and efficacy of which is beyond all but the wildest aspirations of most Western leftists and trade unionists.

Meanwhile, the anti-indepentista milquetoasts of the wider Spanish left plead for a vague federalist solution and reform of a constitution that was, in the words of the Catalan Marxist Pau Llonch, “founded on three pillars: capitalism as a mode of production, the monarchy, and the denial of self–determination.” What guarantees does such a nebulous solution offer the Catalan people that independence does not?

The people of Catalonia have already been failed. The shame of that failure extends beyond Spanish borders. The British Government, never especially troubled by expressions of atrocity amongst its allies, stands by Spain, unwilling to disavow the state whose hair-trigger belligerence British unionists have too often employed to intimidate the U.K.’s own troublesome secessionists. The EU, once again retreating from any virtue embodied by the European ideal, have declared that they trust the leadership of Rajoy to negotiate the crisis. They did not elaborate on how, exactly, such trust had been earned.

Bereft of support from such quarters, there can be no underestimating the importance of solidarity to Catalonia, the future of which remains unknown and fraught with dangers. Yet solidarity is only effective if it exists in moments of both victory and darkness. Catalonia has experienced both. It demands an extraordinary response, and that is what must be provided.

On September 16, before a crowd of 32,000, the Catalan singer, composer and parliamentarian Lluis Llach’s famous anti-Francoist song was sung in Bilbao in the defence of the independence referendum. “If I pull hard this way and you pull hard that way,” the crowd sang, “it will surely fall, fall, fall – and we can liberate ourselves.”

Catalonia has pulled hard. It is up to the rest of the world to match their efforts.