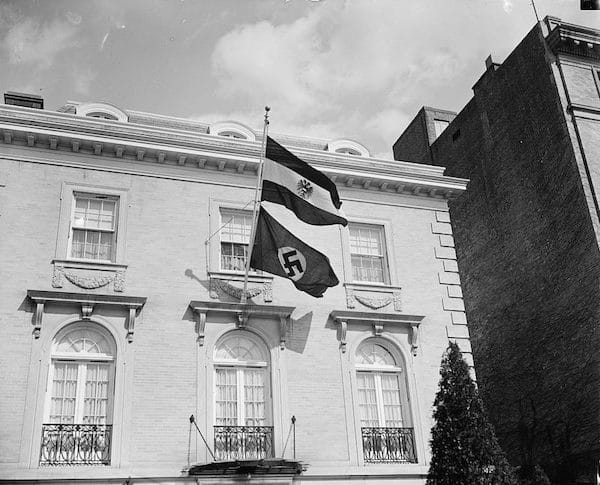 American democracy and liberty might appear to be the opposite of the fascism and horrors of Nazi Germany. But for many, it is intuitive that the United States parallels Nazi Germany’s racism in both law and practice. Hitler’s American Model by historian and legal scholar James Q. Whitman provides material essential to understanding how and why the United States and Nazis share certain similarities.

Depending on the reader’s perspective, Whitman’s central argument seems either modest or bold, as he claims, “What all this research unmistakably reveals is that the Nazis did find precedents and parallels and inspirations in the United States” (10). The most radical Nazis were often the most enthused about American legal precedents. More moderate, less anti-Semitic members of the Nazi Party tended to be more skeptical of American approaches. For some Nazis, “American race law looked too racist” (5). America “was the leading racist jurisdiction” in the 1930s (138).

Before proceeding, it is important to note that Hitler’s American Model is not a book about the Holocaust. Rather, this book investigates institutional discrimination against Jews in 1930s Germany and against people of color throughout U.S. history. In the 1930s, both the United States and Nazi Germany assaulted their own citizens. As Whitman explains, “Jews of Germany were hounded, beaten, and sometimes murdered, by mobs and by the state alike. In the same years the blacks of the American South were hounded, beaten, and sometimes murdered as well” (3).

As a legal history, Hitler’s American Model draws primarily from American and Nazi laws and synthesizes the readings and writings of leaders in Nazi law regarding American legal precedents for racism. Whitman also devotes significant attention to Hitler’s Mein Kampf because it served as a manifesto for Nazi ideology and hatred. Mein Kampf praised America as the only nation that had “made progress toward the creation of a healthy racist order of the kind the Nuremberg Laws were intended to establish” (2). Whitman also analyzes Nazi lawyer Heinrich Krieger’s Race Law in the United States, as well as the 1934 Volkisch World History, a “global history for Nazi readers” (27).

Whitman organizes Hitler’s American Model succinctly into an introduction, two chapters, and a conclusion. Chapter One, “Making Nazi Flags and Nazi Citizens,” analyzes who could enter and exit the United States and Nazi Germany. At the beginning of this chapter, Whitman compares the Nuremberg laws—specifically those establishing who could and could not be a German citizen—to legal precedents in American immigration history. From the Chinese Exclusion Act of 1882 to the present day, and during earlier periods, America has been a “global leader in racist immigration law” (34). The Nazis also applied an American model of disenfranchising groups of its own citizens. For example, American racists intimidated African American voters to prevent them from influencing policy. The Nazis similarly cited Jewish “influence” as their reason for disenfranchising them in the 1930s (67).

Chapter Two, “Protecting Nazi Blood and Nazi Honor,” examines Krieger’s Race Law in the United States to further illuminate American legal influence on the Nazis. Whitman includes images of African Americans in Harlem that Krieger used, surrounded by the German text of Krieger’s book, to reinforce the centrality of American precedents in Nazi legal scholarship. Krieger cited both Thomas Jefferson and Abraham Lincoln’s ideas about relocating African Americans, which appealed to Nazis seeking to expel Jews. Whitman then unpacks the institution of blood laws and the criminalization of certain marriages in both the United States and Nazi Germany. The US had a history of “mixed blood” relationships, mainly due to the raping of women who were enslaved. In order to criminalize certain marriages the Nazis legally established who qualified as Jews, with even those considered less than full Jews being “counted” as Jews (92).

Disagreements among Nazis on this issue did not question whether marrying a Jew was wrong. They disagreed instead on whether they needed to write the crime into law, or if education and “enlightenment” would suffice to prevent it (95). “Moderate” Nazis claimed that education would convince Aryans not to form relationships with Jews. Others argued that Jews were so delinquent that they might evade laws, echoing some Americans’ claims about people of color. Nazis especially admired implicit racism within the American legal system. Whitman explains that Nazis believed “The beauty of the American example was that it demonstrated, as American law so often does, that it was possible to manage a functioning legal system without the sorts of clear concepts German lawyers cherished” (107). Implicit racism continues in the United States today—long after more explicit decrees have faded into history.

Some Nazis believed that American racial codes were too harsh for Germany. Whitman writes, “The influence of American classification schemes was inevitably limited. The scholars who see parallels between American and Nazi racial classification schemes are to that extent wrong—but only because they understate the relative severity of American law” (128). He attributes this difference to clear color lines in the United States, while Nazis discriminated against a population that was mostly cultural or religious. Only the most radical Nazis sought to define Jews by only one Jewish grandparent, while one grandparent of color often condemned an American to a lifetime of discrimination (129). In November 1935, the First Regulation Issued Pursuant to the Reich Citizenship Law declared that having two Jewish grandparents qualified “counting” as a Jew. Intermarriage with Jews, however, constituted Jewish “inclinations,” thereby condemning a person with one Jewish grandparent who married a Jew to suffer Nazi atrocities (130).

Whitman underlines the distinction that America has discriminated according to skin color, while Nazi Germany did not. According to Whitman, the Nazis applied an American interpretation of race in their laws: “American judges had no trouble applying racist law despite its fuzzy concepts” (108). Consequently, “even though America did not target the Jews… its easygoing, open-ended, know-it-when-I-see-it way with the law” supported Nazi objectives (109). While white Americans largely had the opportunity to rise socioeconomically, this was not the experience of most people of color. Hitler and his colleagues viewed the United States as a model for giving unlimited opportunities to Aryans while suppressing racial, religious, and other minorities (141). 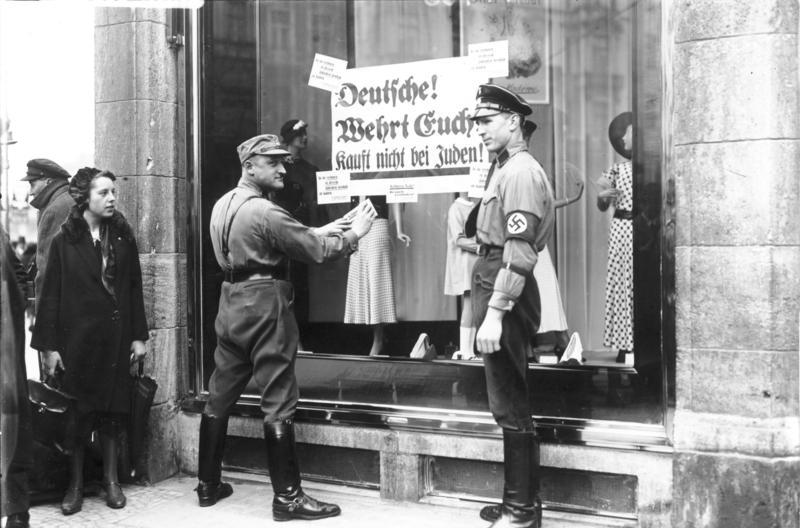 Members of the Nazi Party leadership stage economic boycott against Jewish businesses in Germany after the Nazis came to power in 1933 (Bild Bundesarchiv, Georg Pahl).

The publication of Hitler’s American Model signifies a key step not only in American historiography, but in American history as well. The role of Nazism in American collective memory has evolved from almost nonexistent in the 1950s, to prevalent in the 1960s and beyond, to explosive in today’s political rhetoric. The reception of this book has the potential to transform popular understandings of American connections to Nazism. Whitman understands that “no one wants the taint of an association with the crimes of Nazism” (5). Yet, through a clear reading of his sources, he reveals that the history of race in America not only influenced but also shaped the story of Nazism.

Perhaps Whitman’s greatest intervention in American legal historiography is his revelation that early twentieth-century racism in the US not only affected Americans, but shaped Hitler’s rise as well. Whitman explains, “American legal scholars have written a great deal about the racism of the 1920s immigration statutes; but they seem not to have taken notice of the startling fact that those statutes were lauded by Hitler” (46). Even renowned legal historian Richard Bernstein claims that Nazi references to America were “few and fleeting” (4). Following in the tradition of Mark Mazower’s 2008 Hitler’s Empire, Whitman advances the historiography of Nazi origins: “Nazis were not simply demons who erupted out of some dark underworld to shatter what was good and just within the western tradition” (15). Whitman by no means asserts that America was responsible for the Holocaust, but instead that the United States is responsible for its despicable treatment of African Americans and people of color throughout American history.

While Hitler’s American Model is quite short, totaling less than two hundred pages, Whitman’s concision is ultimately a virtue. The book offers an extraordinarily interesting study of this complex, difficult subject with clear sources and precise organization. Nazi Germany’s treatment of Jews and America’s treatment of people of color are each gruesome in their own ways, and each remains controversial. This is a brave work that traces the legal origins of Nazi persecution of Jews while also illuminating the true colors of American history.