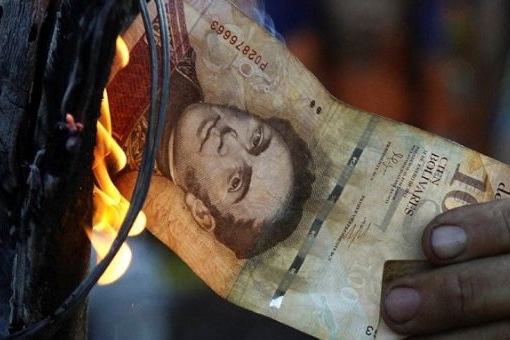 A man burns a 100-bolivar bill during a protest in El Pinal, Venezuela. Photo: Reuters.

This article has been published in Spanish at Rebellion.org and Aporrea.org. In line with Ellner’s argument below, we highly recommend Chapter I. Planned Shortages of professor Pasqualina C. Curcio’s important book, The visible hand of the market, to interested readers. —Eds.

The resounding Chavista victory in the October 15 gubernatorial elections provides a golden opportunity to take bold measures to overcome shortcomings even while risking clashes with powerful individuals or groups. One important failure is the scant evidence that the Maduro government has presented to the Venezuelan public to document the economic war being waged against Venezuela and its efforts to combat corruption, speculation and contraband. It is not enough for Maduro and other leaders to decry the machinations of adversaries and to claim repeatedly that Venezuela is a victim of an “economic war.” For the claim to be convincing, the government needs to reveal the specifics as to how the war is being waged and who the actors and accomplices are, and to expose their modus operandi.

There is no doubt in my mind that the economic war waged by national and international actors to a great extent accounts for the nation’s pressing economic problems. One just needs to consider glaring facts, extrapolate and use a bit of common sense. Fedecámaras (Venezuela’s Chamber of Commerce), after spearheading the April 2002 coup attempt, created scarcities in a second attempt to oust Chávez beginning in December of that year – and that was even before he declared himself a socialist. Then consider the twice-issued Obama decree declaring Venezuela a threat to U.S. national security, followed by Trump’s threats of military intervention and his financial sanctions against the Venezuelan oil industry. These pronouncements are signals to the private sector to pull out of Venezuela, and their effect on private investment are undoubtedly more significant than when the IMF rejects a funding request from a third-world country.

There are only two interpretations of the significance of these aggressive postures by two U.S. presidents. Either they constitute nothing more than bluster with no real effect on the ground, or they have very real repercussions and/or reflect other clandestine or behind-the-scenes actions. There is no doubt in my mind, that the latter hypothesis is the closest to reality. Put another way: there is a relationship between the visible efforts by powerful actors, such as U.S. presidents, Marco Rubio and his ilk, the corporate media, etc., to discredit the Venezuelan government and the decision of GM, Clorox, Kimberly Clark, numerous airlines, etc. to pull out of Venezuela. In short, there is a political motive behind the investment decisions of international capital as well as local capital (such as Alimentos Polar which produces in Colombia and Texas what they previously produced in Venezuela).

Many Venezuelans do not appreciate the impact of this economic war and some are actually skeptical that it exists at all. Maduro and other Chavista leaders are partially responsible for this failure to grasp the intensity and effectiveness of the politically-inspired economic war. Maduro, following in Chávez’s footsteps, puts the accent mark on his government’s positive achievements and in effect downplays the hardships that people are facing on a daily basis. Such a communication strategy has its pros and cons. But regardless of how much he plays up government achievement in a moment of great difficulties, Maduro needs to provide concrete evidence to back his claim of the existence of an “economic war,” since otherwise the term becomes a hollow phrase.

An example of this communication shortcoming is the failure to refute the explanations of numerous airlines over recent months to suspend flights to Venezuela. Delta, United, Lufthansa, Avianca, Iberia, Aeromexico, AeroArgentina have pulled out of Venezuela, while American has canceled many of its flights including those to New York. The airlines offer completely different explanations for their decision and none of them are convincing. American says that it’s because of insecurity, but if that’s the reason why haven’t they eliminated all flights? Furthermore, I have seen personally the routine ground transportation of the airline crews in special vehicles from Maiquetía to a neighboring hotel with no appearance of danger at all. Another argument, that the government owes the airlines money, isn’t at all convincing either. The debt stems from the period when Venezuelans could purchase tickets in bolívares and the government was supposed to convert the bolívares into dollars for the airlines, but that practice was ended about three years ago. So why did the airlines choose the period of heightened political conflict manifested by the guarimba protests in 2017 to discontinue flights?

In August, National Constituent Assembly (ANC) deputy Jacobo Torres delivered a speech in which he referred to the suspension of flights as an example of the economic war. Chavista leaders, however, have to refute the justifications presented by the airlines, one by one. Calling this part of the “economic war” – which indeed it is – is not enough. Airport talk among travelers typically blames Maduro for the difficulties incurred by passengers, rather than the airlines. Specific information is what is needed. The devil is in the details.

Another example of the explanatory shortcoming is the problem of absence of circulating currency. This has been nothing less than an ordeal for the entire nation cutting across class lines. People wait in long lines in and outside of banks and usually are able to withdraw only 10,000 bolivares or less per day. That is the equivalent of less than 50 U.S. cents. I have conducted an unofficial survey of explanations offered by Chavista sympathizers. The fact that different theories are floating around regarding the cause of the shortage of bills, and that even Chavistas are unclear as to what is happening, is clear evidence of a communication problem on the part of the government.

One unexpected bright spot is the anti-corruption efforts of recently appointed Attorney General Tarek William Saab in what he is calling a “crusade.” Crucially, he has the backing of President Maduro and the state infrastructure, including different police forces. On various occasions the Attorney General has addressed the nation presenting details of important state functionaries as well as businesspeople and in some cases members of state security forces who have been arrested. He presents names of the culprits and details of their operations as well as his own efforts. For instance, today (October 18) he indicated that a bank account has been opened in one of the state banks where the bills that were confiscated are being deposited. The explicitness of Saab’s presentations contrasts with operations in the past, in which names and other details of the accused were not presented. Apparently the government acquiesced to Fedecámaras’ insistence that businesspeople accused of wrongdoing should be considered innocent until a judge’s verdict indicates the contrary.

Following the Chavista electoral victory on October 15, Chavista leaders have begun to talk of a reactivation (“reimpulso”) and renovation of the Chavista movement and the need for elected officials to be more in tune with the people and more open to criticism. These calls were expressed in the ANC’s session of accreditation of elected governors on October 18. ANC president Delcy Rodríguez, elected governor of Lara Carmen Melendez and elected governor of Miranda Héctor Rodríguez all articulated this message. To be effective, the renovation has to include a new type of discourse which bypasses empty generalizations and stresses the specific, concrete aspects of the problems effecting people’s daily lives and the specific actions that are being taken to alleviate those problems.