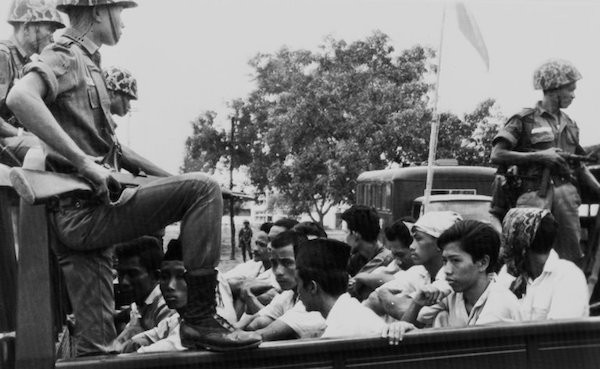 US Stood By as Indonesia Killed a Half-Million People, Papers Show

“Standing by,” however, is not what the United States did during the Indonesian genocide of 1965–66; rather, it actively supported the massacres, which were applauded at the time by the New York Times.

Indonesia in 1965 was run by President Sukarno, an anti-colonial nationalist who had irritated Washington with friendly ties to the Indonesian Communist Party, known as the PKI. When an abortive coup attempt was dubiously blamed on the PKI, this was seen by both the Indonesian military and the US as an opportunity.

“Events of the past few days have put PKI and pro-Communist elements very much on defensive and they may embolden army at long last to act effectively against Communists,” the US embassy in Jakarta told the State Department in a now-declassified telegram (10/5/65). While advising the US to “avoid overt involvement as power struggle unfolds,” US Ambassador Marshall Green urged the government to

Covertly, however, indicate clearly to key people in army such as Nasution and Suharto our desire to be of assistance where we can, while at same time conveying to them our assumption that we should avoid appearance of involvement or interference in any way.

Notably, the embassy identified propaganda as a key role for the US to play:

Spread the story of PKI‘s guilt, treachery and brutality (this priority effort is perhaps most needed immediate assistance we can give army if we can find way to do it without identifying it as solely or largely US effort).

The Indonesian military used the coup attempt to justify an ongoing series of massacres, targeting not only PKI members but also the ethnic Chinese community that was their primary base. As the scope of the bloodbath became clear, the US cheered on the killing, with Ambassador Green (10/20/65) writing that the Indonesian army had been “working hard at destroying PKI and I, for one, have increasing respect for its determination and organization in carrying out this crucial assignment.”

The Washington Post (12/2/15), marking the 50th anniversary of the genocide, ran a piece by historian Kai Thaler that summarized the active role the US played in supporting the mass killing: 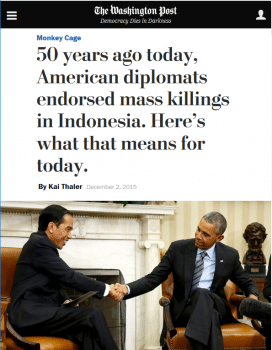 This Washington Post headline (12/2/15) frames US involvement in a more active light.

[Secretary of State Dean] Rusk affirmed US support for the “elimination of the PKI.” US officials also provided detailed lists of thousands of PKI members for the military and anti-communist civilians, with American officials reportedly checking off who had been killed or arrested.

Amid reports of massacres throughout the country, in late October, Rusk and U.S. national security officials made plans to unconditionally provide weapons and communications equipment to the Indonesian military, while new US aid was organized in December for the civilian anti-communist coalition and the military. By February 1966, Green stated approvingly that “the Communists…have been decimated by wholesale massacre.”

Compare that to the New York Times‘ account, by Southeast Asia bureau chief Hannah Beech, which puts the US in an altogether more passive light:

It was an anti-Communist blood bath of at least half a million Indonesians. And American officials watched it happen without raising any public objections, at times even applauding the forces behind the killing, according to newly declassified State Department files that show diplomats meticulously documenting the purge in 1965–66….

When a group of hard-line generals blamed Communist Party operatives for a failed coup attempt in 1965, with China accused as a mastermind, Washington did little to challenge that narrative.

The United States government largely stayed silent as the death toll mounted at the hands of the Indonesian Army, paramilitaries and religious mobs.

It was not that “Washington did little to challenge that narrative” being used to justify hundreds of thousands of murders; rather, spreading that narrative was seen by the US ambassador as “perhaps most needed immediate assistance we can give army.”

The New York Times (7/12/90) went out of its way to cast doubt on evidence of US participation in the mass murders.

This is not the first time that the New York Times has downplayed US culpability in the Indonesian bloodbath. When Kathy Kadane of States News Service (Washington Post, 5/21/90) broke the story that the US embassy had provided lists of PKI members to the Indonesian military at the height of the murders, the Times‘ Michael Wines (7/12/90) wrote an unusual attempt to discredit the story:

A dispute has developed over a report that 25 years ago, United States officials supplied up to 5,000 names of Indonesian Communists to the Indonesian Army…. The dispute has focused on whether the decision to turn over the names was that of an individual American Embassy officer, or was coordinated with the Central Intelligence Agency and approved by senior embassy officers.

As FAIR noted at the time (Extra!, 7–8/90), the Times‘ reluctance to admit that the US had actively participated in the Indonesian genocide may have been related to its enthusiasm for the genocide as it was happening:

While some of its coverage did invoke the horror of the massive killing (as early as 1/16/66), in general the Times’ commentary and analysis viewed the destruction of the Communist party quite favorably. “A Gleam of Light in Asia” was the headline of a James Reston column (6/19/66). “Almost everyone is pleased by the changes now being wrought,” C.L. Sulzberger commented (4/8/66). The Times itself editorialized (4/5/66) that the Indonesian military was “rightly playing its part with utmost caution.”

But perhaps the most enthusiastic of all the Times’ writers was Max Frankel, then Washington correspondent, now executive editor. “US Is Heartened by Red Setback in Indonesia Coup,” one Frankel dispatch was tagged (10/11/65). “The Johnson administration believes that a dramatic new opportunity has developed both for anti-Communist Indonesians and for United States policies” in Indonesia, Frankel wrote. “Officials…believe the army will cripple and perhaps destroy the Communists as a significant political force.”

After the scale of the massacre began to be apparent, Frankel was even more enthusiastic. Under the headline “Elated US Officials Looking to New Aid to Jakarta’s Economy” (3/13/66), Frankel reported that:

the Johnson administration found it difficult today to hide its delight with the news from Indonesia…. After a long period of patient diplomacy designed to help the army triumph over the Communists, and months of prudent silence…officials were elated to find their expectations being realized.

Frankel went on to describe the leader of the massacre, Gen. Suharto, as “an efficient and effective military commander.”

To acknowledge that the US has looked upon mass murder as a positive project worth supporting is risky when the Times itself saw that same mass murder as worthy of support.

It’s not that the Times‘ piece today is wholly uncritical; it even admits, in a backhanded fashion, that the US did more than “stand by” during the massacres:

In 2015, Senator Tom Udall of New Mexico reintroduced a resolution in the Senate calling for Indonesia to face up to its traumatic history. He also held the United States to account for its “military and financial support” there, which included providing lists of possible leftist sympathizers to the Indonesian government and, as one cable released Tuesday showed, pushing to bury foreign news coverage of the killings.

But this information, appearing two-thirds of the way through the article, does not overcome the message in the headline and much of the text that the US sinned by omission, not commission. Framing Washington as a passive onlooker rather than active participant not only lessens the government’s (and the New York Times‘) culpability; it also tells readers that if the US is to be faulted, it’s to be blamed for not doing enough. That’s a handy attitude to cultivate for the next time you want to sell a “humanitarian” war.