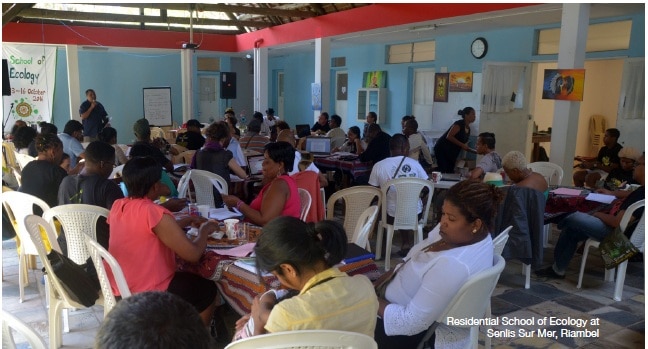 Attendees of the School of Ecology Mauritius 2016.

MR Press author and MR contributor Dr. Richard York recently attended the five-day long conference hosted by the Center for Alternative Research and Studies (CARES) in Mauritius. Below is a summary of his presentation from conference organizers. See School of Ecology Mauritius 2017 for more information. 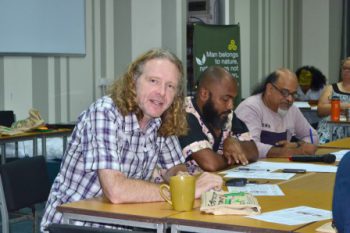 Richard York at the School of Ecology Mauritius 2017.

Richard York, in his last intervention entitled “Ecological rift and influential thinkers” introduced six abstractions, that enabled the School of Ecology 2017 participants to better understand Capitalism internals and underlying paradoxes, namely, use value versus exchange value, internalized versus externalized costs and benefits, Lauderdale paradox, temporal discounting, Jevons paradox and displacement paradox. Participants have been able to better understand these concepts, and link them to the root causes of their struggles, thus having a better background to face them. The summary below is a reporter’s capture of the session feedbacks given by the participants.

Preserving the multiplicity of knowledge

A lot of academic terms have been used during the presentation, and some of them may not be familiar to the audience. However, people often know them, and have different words for them. Like Marxist theory often used in Europe, other systems of thought exist all over the world, in Latin America and Africa for instance, and it is worth to include them in our thoughts. Exploitation and justice solidarity is known by all the people, even if they do not have a high level of academic education.

For instance, Jerome, a traditional fisherman from Bain de Rosnay, member of the “Kolektif Sov Bain de Rosnay” in the North-East of Mauritius, shared to the audience, that despite he did not have a high level in academic education, he was very touched by the session, very honoured and pleased to be part of the School of Ecology to represent his local community. Jerome is convinced that the ecological threat towards the lagoon ecosystem his local community interacts with is not the way to go. Moreover, he has been able to feel the great strength of the group, composed of citizens from all over the world sharing and learning together using different backgrounds on these critical issues. People do know so much more that the academic background. Everyone know his world.

Use value vs. exchange value

As human beings, we sometimes promote things that do not even help us. We have a lot of symbolic related to objects we interact with, but it tends to be the same meaning for everyone, through global education and mass media, bringing common references. Marketing is the typical activity of studying how to influence on people’s value reference. This interference can have negative impacts on people’s identities.

Use value can be satiated. But Capitalism leads to values that can not be satiated, through an abstraction of exchange value, and the market determining values. This is how the system allows accumulation, because if we all had what we needed, the system would collapse.

However, Capitalism can also generate needs that can be satiated, by adding more and more levels of needs that change in time, or by planned obsolescence of products.

There is also the fundamental problem of putting a price value to Nature. Even if Capitalism acknowledges the value of Environment, value is not only representable by dollars, which is a weakness in this system that clearly illustrates the mismatch of Capitalism towards Nature and Ecological concerns.

One comrade from South Africa found it important to remember that Capitalism is a serie of capital that compete against other targeting accumulation. The three axes, that are Neoliberalism, Trade agreements, and financial system have also been introduced in this context.

As eco-socialists, we need to correctly set our priorities, be part of a local-community, take great care of kids education in order to make good use of our resources. Moreover, we need to free our mind from these exchange based values that can not be satiated, that some call mental decolonisation.

A simpler subtitle could be “The corporates versus the mass”. This is clearly an irresponsible stand towards Commons, as the corporate internalized the benefits, while externalizing the costs in order to improve profits margin. The corporate profits thus increase, and the resources available to the mass is reduced and/or damaged.

Comrades from South Africa shared about a mining project in the East coast of the country, leading to an unprecedented level of unemployment, water contamination, and toxic minerals going down to Mozambique. This clearly illustrates that the benefits are internalized to the corporation, while the costs are externalized to the people.

Our comrades from Mauritius shared that in 2008, a textile factory, which evacuation of water was going into the lagoon, led to an ecological catastrophe. When fishermen protested about that issue, the owners gave them money, and they today regret they have accepted such money. Now facing a beach grabbing issue (a luxury real estate project planned for rich foreigners) that would, among other issues, take the jetty which is also used by the fishermen. As they look backwards at this 2008 issue, they are refusing any money any more when it comes to destroying their lagoon and biodiversity.

There is an inverse correlation between public wealth and private wealth; an increase in one can only come at the cost of a decrease in the other. The total amount of wealth does not change and only get reallocated, and ends up with a few people. From the start, public wealth is all that exists. Capitalism claims ownership to own private wealth. The grabbing process makes public wealth go down, and the private wealth to increase.

Our comrades from Seychelles Island illustrate how this main blue economy issue concerning fishing, that is public wealth, is going down, but private wealth goes up by selling this rare commodity.

Our comrades from Mauritius shared with the audience the sad story of vegetables small scale farmers that are cut off by big shopping malls, by a corporate take over. This does not empower the people of the local-community around the shopping mall.

Our comrades from Southern Africa shared to all how Shoprite spread all over the region. They are supplying from South Africa, and local people do not directly benefit from that service, it is a mass production to another.

Our comrades from Rodrigues shared that they do not have strong private industries. However, same issues are faced towards bad unilateral political decisions. They shared the issue of wrong exploitation of underground water, that led to rarification of river water. Now the Rodrigues people who were used to get water from the river, need to pay for water-carrying lorries for water that was once free and available. Their organisation have done actions to sensitize population about the root cause of this critical problem, led by bad political decisions, but the population does not want to confront their leaders.

Our comrades from Brazil shared to us that this reminds them the bad experience about hurricanes, where something that is a tragedy can be a benefit for a group, illustrating how capitalism can make benefit on disgrace.

Our comrades from Madagascar also shared about this issue. Some people arranged for a dust beach, and then controlled and rented the clean places, thus creating a private market for them.

The example here is the concern of Capitalism towards climate change. How do we make a provision for a certain cost in future ? what methodology should be used ? Despite we could pay for it now, we differ to pay it and let it to the coming generations.

We need to strengthen that the key point fundamental hidden assumption is that anything in the future is worth less, that is not acceptable towards the generations to come.

The only answer from Capitalism here is a simple formula to reach the estimated future costs that would need to be allocated. As an illustration, the only stand from Capitalism is to allocate 2.5 MUR per year, at a 6 % rate (like an interest rate), to reach 1000 MUR, that is the cost of climate change in 100 years.

The use of a simple mathematical calculation to justify our inaction is pathetic. It is time for the mass to wake up. Our comrades from South Africa shared that the consequences today are destroyedsoil fertility, sickness and infertility.

In a nutshell, technological process increases the efficiency with which a resource is used, and that increases the demand on that resource. The audience was affected by this statement. Thinking about improving, what should we do ?

In a certain way, efficiency leads to keep status quo. Some of us found alarming that efficiency does not lead to sustainability. Our comrade from South Africa shared that we need to challenge some assumptions, and language semantic. What is the meaning of efficiency in the context of public utilities ? We need to specify indicators to define efficiency.

It is more about Capitalism that does not convert efficiency into things that are good, and instead converts it into dollars. Although labour efficiency has improved, one would think we would have more vacation, more salary, but this is not the case. People work more hours, and have less time. We could convert that improvement to get more free time and comfort. Capitalism is not efficient in producing human quality of life., but efficient in producing dollars.

Many of us are working on renewable energy. At the end of the day, unless we really change the system, it can be profitable for the Capitalism and fossil fuel continues to damage.

Personal changes and initiatives are important, but unless we change the system, they will not address the climate change. We need to help raise political consciousness that a system change is also needed.

Our comrades from Reunion Island acknowledge this by sharing that even that in Reunion Island there are a lot of solar energy, but it does not decrease the amount of fossil fuel consumption. Supermarket parkings, profits for them, do not lower the cost of fossil fuel. It is in that sense that green capitalism is not less dangerous than capitalism.