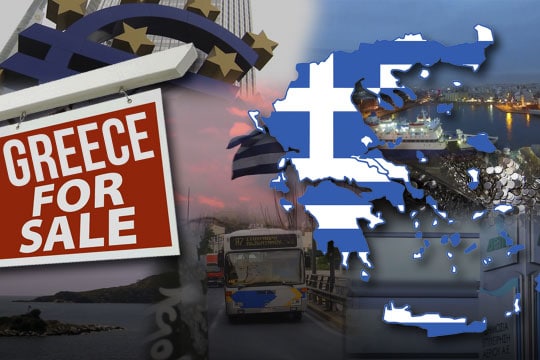 Greek Prime Minister Alexis Tsipras is facing withering criticism following his visit to Washington, where he is accused of prostrating Greek national interests before President Donald Trump – whom he had only last year accused of representing “evil” – while selling the country out to the United States.

The visit comes amid an increasing strain in relations between the United States and longtime NATO ally Turkey, whose mercurial leadership under President Recep Tayyip Erdogan appears to be moving toward Iran and Russia in a potentially historic alliance shift. 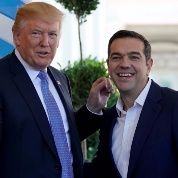 Tsipras, a 43-year-old former communist, hailed Greek-U.S. ties as the best they’ve been since World War II, noting that officials in the Mediterranean nation “look forward to attracting U.S. investments.”

“We have common values,” Tsipras said to the smiling U.S. leader through a translator during a Rose Garden news conference on Tuesday. “Don’t forget that the value of democracy and freedom was born in Greece. It’s one of the values that traverses American culture and American tradition. The President now continues that tradition.”

Ignoring the U.S. military’s “regime change” wars in the Middle East which caused tens of thousands of refugees to spill across Greek borders, Tsipras also hailed the U.S. promoting “cooperation with the Middle East and the Balkans, which contribute to the security and the growth of the area.”

Tsipras’ words were a far cry from the prime minister’s speech in March of last year when he said that “the ideas (Trump) represents, the appeal it reaches and the threat to become even president – I hope we will not face this evil.”

The meeting found little sympathy among Greeks who remember well the backing the U.S. provided to the right-wing monarchists during the Greek Civil War or the Cold War-era support provided to the violently anti-communist Greek military junta of 1967 to 1974.

The Front of the Greek Anticapitalist Left or ANTARSYA denounced the meeting as a display of open boot-licking toward U.S. imperialism that risks entangling the poverty-stricken and debt-choked Greek people in regional military conflicts.

“The Greek government appeared willing to participate as a ‘strategic partner’ in the crimes of American imperialism, aiming at rewards that would enhance the position of Greek capitalism in the region in relation to Turkish capitalism,” ANTARSYA said in an English statement sent to teleSUR. “In the context of Greek-Turkish competition, Alexis Tsipras promises to bind the country to American imperialism, with what it implies for the Greek people and peoples of the region.” 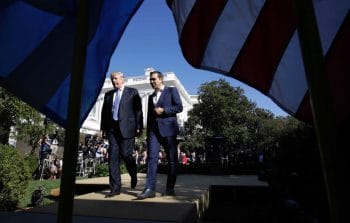 Trump and Tsipras return to the Oval Office after a joint news conference in the Rose Garden of the White House in Washington, U.S., Oct. 17, 2017.

Trump, in turn, offered praise for his socialist counterpart, noting that Greece is among the NATO members that spend at least 2 percent of their gross domestic product on the military, while also praising the “continued implementation of reform” and structural adjustments.

“And we love that country, special country, one of the most beautiful countries in the world,” Trump mused. In March, the president – a Jamaica, Queens native – had said, “I love the Greeks. Oh, do I love the Greeks … Don’t forget, I come from New York. That’s all I see, is Greeks. They are all over the place.”

The president also noted that Greece is an important military partner to the U.S. The two discussed upgrading a NATO-Greek naval base in Souda, Crete, and potentially building a new U.S. naval base elsewhere on the island.

Controversially, Tsipras also agreed to a $US2.4 billion deal to upgrade the Greek Air Force’s aging fleet of F-16 aircraft, raising the eyebrows of European bankers concerned about Greece’s ability to pay off its debt.

The move is just the latest in a long line of perceived betrayals by the 43-year-old former communist who rode to power in 2015 on an anti-austerity platform representing the left-wing Syriza party.

Since then, Tsipras’ party has seen its popularity drastically decline as vows to protect the people from Europe’s predatory troika made way for further bailout programs built around privatizations, increased taxes for working-class Greeks and some of the harshest austerity measures the country had seen since the Greek Depression began in 2009.

Antarsya dryly noted that Tsipras’ Syriza coalition government seems to have moved Greece from accepting “ownership” of European bankers’ demands for neoliberal structural adjustment to an ownership of “’American dominance’ which it seeks to embellish,” insulting the historical memory of the Greek people.

“All this at the time when the U.S. president is the most openly pro-war, racist, sexist and warmonger, who escalates its war threats against North Korea and Iran,” the group added.

Some newspapers have compared Tsipras’ visit to Washington to the 1972 visit of Richard Nixon to China, where he and Mao Zedong sealed a major alliance stemming from a shared opposition to the Soviet Union.

Trump ended the meeting noting that he looks “forward to many, many years of friendship, working together” with Tsipras.

“The statements of Tsipras are unprecedented manifestations of subordination, but also a shameful monument to Trump’s words” looking forward to a continued Syriza government, Antarsya said.