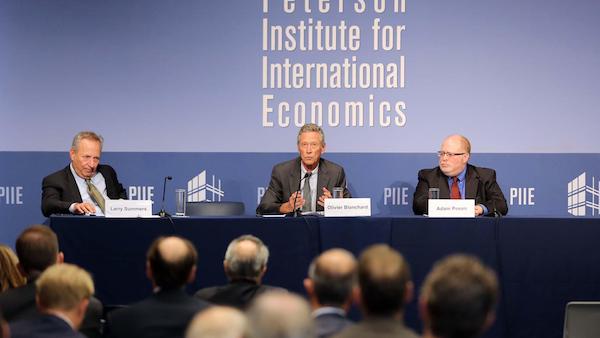 Sometimes we just have to sit back and laugh. Or, we would, if the consequences were not so serious.

I’ve been reading and watching the presentations (and ensuing discussions) at the Rethinking Macroeconomic Policy conference recently organized by the Peterson Institute for International Economics.

Quite a spectacle it appears to have been, with an opening paper by famous mainstream macroeconomists Olivier Blanchard and Larry Summers and a closing session—a “fireside chat” without the fire—with the very same doyens of the field.

The basic question of the conference was: does contemporary macroeconomics, in the wake of the Second Great Depression, require a few reforms or does it need a wholesale revolution? Blanchard lined up in the reform camp, with Summers calling for a revolution—with the added spice of Adam Posen referring to himself as Trotsky to Summers’s Lenin.

Most people would think it’s about time. They know that mainstream macroeconomics failed spectacularly in recent years: It wasn’t able to predict the onset of the crash of 2007-08. It didn’t even include the possibility of such a crash occurring. And it certainly hasn’t been a reliable guide to getting out of the crisis, the worst since the Great Depression of the 1930s.

So what are the problems according to Blanchard and Summers? In their view, “the events of the last ten years have put into question the presumption that economies are self stabilizing, have raised again the issue of whether temporary shocks can have permanent effects, and have shown the importance of non linearities.”

Only mainstream macroeconomists could possibly have thought that capitalism is self stabilizing. The rest of us—who have read Marx and Keynes as well as the work of Robert Clower, Hyman Minsky, and Axel Leijonhufvud—actually knew something about the roots of capitalist instability: the various ways a monetary commodity-producing economy might (but not necessarily) generate imbalances and instabilities based on the normal workings of the system.

Yes, of course, temporary shocks can have permanent effects. How could they not, when tens of millions of people are thrown out of work and, especially in the wake of the most recent crash, inequality has soared to new heights?

And then there are those “non linearities,” the idea that financial crises are characterized by feedback effects such that shocks, even small ones, “are strongly amplified rather than damped as they propagate.” Bank runs are the quintessential example—whether customers demanding their deposits in the first Great Depression or the run on financial institutions (including insurance companies that issued credit default swaps) that occurred in the midst of the second Great Depression. But that’s not all: when corporations, facing a declining profit rate, choose to sell but not purchase, they make individually rational decisions that can have large-scale social ramifications—for workers, indebted households, and other corporations (on both Main Street and Wall Street).

So mainstream macroeconomists appear to be waking up from their slumber and seeing capitalism as it is—and as it has functioned for 150 years or so.

You’d think, then, with all the rhetoric of reform and revolution, they’d be in favor of questioning the entire edifice of their theories and models. What we get instead is a bit of tinkering, along the lines of the following: (a) monetary policy is limited because of low interest-rates (although it’s still expected to provide generous liquidity in the even of another shock); (b) more active financial regulation, which still may not be able to keep up with the quickly changing and complex structure of the financial sector and actually prevent financial risks; thus (c) fiscal policy should once again be important, both because of the limits on monetary policy and financial regulation and because, with low interest-rates, government debt is less significant.

No, you’re not mistaken, it sounds a lot like a mainstream version of Keynesian macroeconomic policy, which is consistent with the subtitle of the Blanchard and Summers paper: “Back to the Future.”

That’s it? That’s all we’ve learned in the last ten years? Not a word in their paper about the international dimensions of macroeconomics—nothing about international contagion (e.g., the fact that the crisis started in the United States and then engulfed the rest of the world) or cross-border capital flows. And, perhaps even more important, there’s no discussion of inequality and the role it played both in creating the conditions for the crisis or the way it has characterized the nature of the recovery.*

There’s no reform being proposed here, let alone a revolution. It’s just business as usual, which is exactly the way the recovery itself has been treated.

In the end, Blanchard, Summers, and the other participants in the conference are the macroeconomists who developed the current models and policies. Thus, for all they might venture some mild criticisms of the pre-crisis orthodoxy and call for some new ideas, they are so invested in the status quo, no one should expect a truly radical rethinking from them.

To expect otherwise is just laughable.

*Yes, there was one paper in the conference on inequality, by Jason Furman, but it was about growth, not macroeconomic policy. The theme of inequality was not taken up in the rest of the conference—and it was even ridiculed (e.g., in terms of the research currently being conducted in the IMF) by Summers in the final session.