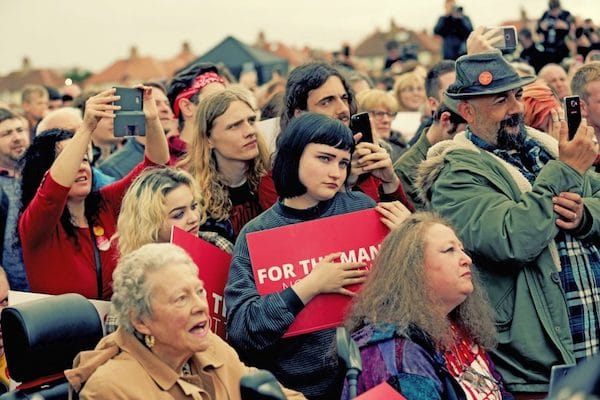 Unlike them, our class doesn’t have the money or the institutions to win from above. The only way to stop them will be from below. This means engaging new people. Convinced socialists are great at election time, but ultimately we’re going to need people far beyond the bubble. We don’t want just another change at the top – we want a social revolution. Here are three ways you can build Corbynism from below.

The working class aren’t organised in the one place where we have most power – at work. Our unions have been battered for the last 30-odd years, and strikes are at historic lows.

Every socialist should know where the unorganised big workplaces are in their town or city. They’re likely to be places like call centres, cinemas, fast food restaurants, pub chains, care homes, warehouses, supermarkets, or platforms like Deliveroo and Uber.

If you work in one, great – start organising. Talk to coworkers and start a union branch or an informal group. Take on a small problem, win and then build from there. Most of the time, all that’s needed is for a few people to stand up to the bosses and things start changing fast.

If you don’t work in a big unorganised workplace, and you’re flexible enough to change jobs, think about getting a job somewhere you could organise. This is called salting the floor– it works, and socialists have been doing it for generations.

One organising tactic that could be used more often is the community picket. Community pickets increase the impact of strike action and help spread it to new workplaces. McDonald’s and Picturehouse/Cineworld workers have both successfully called for community pickets. If we’re going to rebuild a rank and file workers’ movement, we need to start by giving even small strikes all the support we can, and Labour branches need to support any action taking place in their area.

The demands we can make about work from below are for decent wages, proper contracts and the right to strike for everyone. That means introducing a £10 an hour minimum wage, banning zero hours contracts and repealing all anti-worker trade union legislation.

The housing crisis means most of us pay high rents for bad housing. But almost no tenants are organised. That means we have no power, and can’t make the situation any better.

Where tenants unions have been started, like ACORN in Sheffield and Bristol, they’ve grown fast and been really effective. They’ve shown we can take on landlords, letting agents and the council and win. Their organising guide is a good place to get started.

As the change to Universal Credit starts to mess up people’s ability to pay rent, it’s more important than ever to get tenants organised. Just like with strikes, you can get active in your Labour branch to support tenants unions. You can also put pressure on local Labour councillors. We elected them to represent our party and our class – they have no excuses for screwing us over. We have to convince them to back us, and not the Tory government.

The demands we can make about housing from below are simple: cut the rent, end gentrification, no evictions. This means introducing rent controls, letting social housing residents vote on redevelopment, and banning the eviction of anyone without a second home.

3. Organise in the community.

With the demise of working men’s clubs and over 20 pubs closing every week, lots of working class areas have lost important parts of their community. As youth centres and all the rest get cut, people are losing touch with each other. Solidarity needs to be built from the ground up. That means talking to ordinary people every week, not only at elections.

Working men’s clubs definitely weren’t perfect, but the idea of having places we own and run is still a good one. Cooperative estate pubs have been successful, and we need more of them. New social centres, like Partisan in Manchester, are another good model. These places give space back to the community and the movement. We can control our own locals, and turn them into our meeting rooms, venues, and classrooms. Let’s stop spending our money in places that line the pockets of the bosses.

It’s not just drinking that we can do as a community – sport has always brought people together. Football is the obvious example. Alongside the big names like Celtic and Liverpool, socialist fan culture has been growing in the lower leagues. FC United of Manchester, Dulwich Hamlet, Whitehawk, Eastbourne Town, and Clapton all have fans that challenge racism, sexism and homophobia and support football for all. Red gyms have started opening around the country in London, Brighton, Manchester and Leeds, and competing in the national Physical Resistance tournament. Boxing and other combat sports are a great way to get people involved who wouldn’t usually come along to a branch meeting.

In some places socialists already organise clothing banks and free evening classes. Austerity has been a political attack on our class, so when we fill the gaps left behind by cuts we should fill them with political projects.

If we want to win, we need bosses giving in to our demands for better wages, landlords afraid to put up rents, and a cooperative pub on every big estate. We need communities built around practical solidarity and socialist politics. When that happens, it doesn’t matter what they do from above. They can attack Corbyn all they want – we will have the power from below.