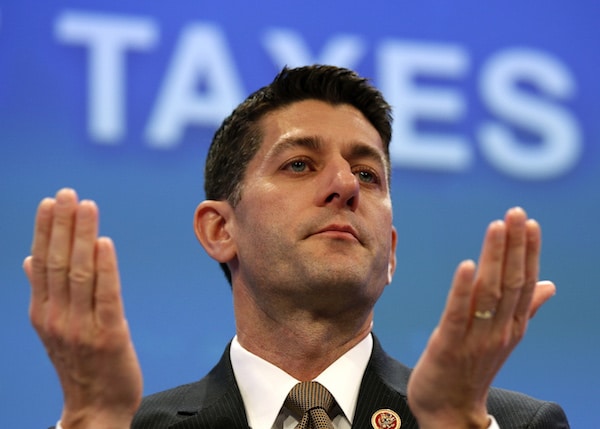 Powerful corporations and the rich in the United States continue their winning ways. By narrow margins, both the House of Representatives and Senate have agreed on a budget proposal that calls for an increase in the federal deficit of $1.5 trillion dollars in order to fund a major reform of the U.S. tax system that will make the rich and powerful even more so.

Republicans in each house of Congress still need to work out the specifics of their desired tax reform and then negotiate any differences before they can send the budget to President Trump for his signature. But, there seems to be general consensus on the following business tax changes:

The Tax Policy Center estimates that these and other less significant changes would give corporate America a $2.6 trillion tax cut over the next decade.

There will also be changes to the personal tax code, although in dollar terms not nearly as large as the likely business tax changes highlighted above. There seems to be agreement in both the House and Senate on ending the inheritance tax and alternative minimum income tax and reducing the number of individual income tax brackets from seven to three, with tax rates of 12 percent, 25 percent and 35 percent, although some members of congress would like to add a fourth higher bracket for very high-income earners.

The only serious disagreements involve whether to raise funds to offset the huge deficits that will be generated by the business tax cuts by ending federal deductions for state and local government taxes and restricting the yearly contributions taxpayers can make to their tax deferred 401(k) retirement accounts, both changes that would hit middle income earners hard.

No doubt as both houses of congress set to work, public attention will be directed away from both corporate tax cutting, which is the main aim of the tax reform and the primary driver of a growing federal debt, and the various tax give-aways to high income earners, and towards possibly heated congressional debates over the possible loss of personal tax deductions enjoyed by middle income earners.

Business, at least for now, no longer cares about the deficit

It is the business community that is driving this push to slash corporate taxes. As an article in Bloomberg Businesweek explains:

It was only about five years ago that powerful people in finance loved talking about the horrendous consequences for the U.S. if it didn’t get its finances under control. They warned that the federal debt—and the interest payments—could eventually get high enough to drag down the economy, burden future generations, and even threaten national security. Chief executive officers of five of the biggest U.S. banks joined a campaign called Fix the Debt, signing on with hedge fund billionaires, asset managers, and private equity executives, as well as former lawmakers and others.

It was not long after Trump’s election that everything changed. From then on, the business community, including most of the leading members of Fix the Debt, embraced tax cuts without concern for the deficit:

Case in point: Goldman Sachs Group Inc. CEO Lloyd Blankfein, a Fix the Debt supporter who in 2012 told CNBC he’d be for higher taxes if they helped mend the fiscal gap. After the election, Blankfein told colleagues in a companywide voicemail that Trump’s proposals, including tax reform, “will be good for growth and, therefore, will be good for our clients and for our firm.”

He wasn’t alone. It’s “about capitalism,” JPMorgan Chase & Co. CEO Jamie Dimon said in February, as he pushed Washington to lower corporate taxes. He suggested that if corporate rates fell, wages would come up. A few weeks earlier, Bank of America Corp. head Brian Moynihan said Trump should focus on cutting taxes. They were part of the antidebt campaign, too.

Dimon is right—it is about capitalism, which means that business leaders have one goal—maximize profits. And if their desired tax cuts cause deficit problems down the road, well, these business leaders will effortlessly shift their message back to “fix the debt,” which translates into the need to slash critical social programs, all in the name of promoting a healthy capitalism.

Of course, there is always an attempt to present policies designed to enrich the powerful as beneficial for all. The argument has to be made and publicized, regardless of who really believes it. And here it is: Kevin Hassett, the Chair of President Trump’s Council of Economic Advisers, has announced that the corporate tax cuts being discussed could be expected to increase a typical American household’s income by $3000 to $7000 a year.

The argument made by Hassett and the rest of the Council of Economic Advisers is that high corporate taxes force companies to invest overseas and reduce hiring in the United States. In contrast, lower corporate taxes will lead corporations to invest and complete for workers, all of whom would be more productive thanks to the investment, thereby driving up growth and worker earnings.

There is, in fact, little support for this notion that tax cuts lead to higher wages. As the New York Times reports:

Other research has cast doubt on the theory that businesses would pass tax savings on to their workers in the form of higher wages. A 2012 Treasury Department study, which Treasury recently removed from its website, found that less than a fifth of the corporate tax falls on workers. A Congressional Research Service report last month concluded that the effects of corporate taxes fell largely on high-income Americans, not average workers.

So, how did the Hassett and the Council get its result? Jared Bernstein, a Senior Fellow at the Center on Budget and Policy Priorities, examined the model used. As he explains:

The interesting economics question is to why the model predicts such an unrealistic result for the U.S. economy? Which of the assumptions most fail to comport with reality? To the extent that we want to train students to be useful practitioners as opposed to proficient, yet unrealistic, modelers, answering those questions would also provide some real educational value-added.

In this case, the model assumes that the U.S. is a small, open economy such that capital inflows instantaneously fund more investment, such investment immediately boost productivity, and the benefits of faster productivity immediately accrue to paychecks. The simple model ignores the extent to which these inflows would raise the trade deficit as well as their impact on revenue losses and higher budget deficits.

The model assumes away imperfect competition, which is relevant today as a) monopolistic concentration is an increasing problem, and b) the one thing economists agree on in this space is that in these cases, the benefits of the corporate cut flows to profits and shareholders, not workers, other than maybe some “rent sharing” with high-end workers.

It may well be too late to stop this round of tax giveaways to business and the rich. But it is not too late to use the moment to help working people develop a clearer picture of how capitalism works and a more critical understanding of the arguments used to defend its interests. It wont be long before new economic tensions and difficulties present us with another opportunity to resist and hopefully, if we have used this time well, advance a meaningful movement for change.