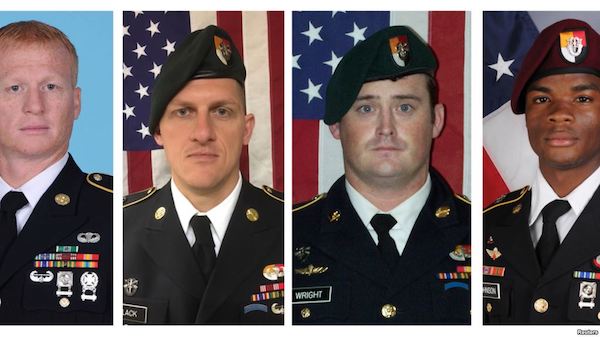 On October 4, four US soldiers were killed in a firefight in Niger. The United States government is convinced, with minimal intelligence, that fighters from the Islamic State (ISIS) killed these men. One former US intelligence officer, who served in a clandestine capacity in Africa, told me that there is little likelihood that the US knows who actually killed these men. But it is convenient to point the finger at ISIS. There is no need for any evidence. It is enough to say that ISIS did it. No one is asking any further questions.

Meanwhile, in neighboring Mali, an Army Green Beret was strangled to death in his embassy housing in Bamako on June 4. It is now likely that two men from the US special operations’ elite unit, Seal Team 6, killed him. The Green Beret was in the 3rd Special Forces Group. The men killed in Niger also came from this Group, as did a US soldier who died in car accident in February. ISIS killed none of these men. But their deaths have raised serious questions in the United States and in the countries of the Sahel about the escalation of Western troops in this belt that forms the southern border of the Sahara Desert.

These are soldiers tasked with prosecuting the War on Terror in the Sahel. It is their job to fight against ISIS, al-Qaeda in the Islamic Maghreb and Boko Haram. Certainly these groups are to be found in parts of the Sahel. Their presence has allowed the French to join five African countries (Burkina Faso, Chad, Mali, Mauritania and Niger) in a so-called G5 Sahel initiative. France is clearly driving the agenda here, but is not named in the G5. This is the way neocolonialism works in our time, where the imperial power hides behind local governments but calls the shots.

French President Emmanuel Macron was at the July summit in Bamako, leading the process. The European Union pledged $57 million to the effort, with France putting in an additional $9 million and with contribution of military equipment. France’s own efforts began in 2014 under a counter-terrorism mission known as Operation Barkhane. It has allotted at least three thousand troops to the overall fight alongside the G5 Sahel initiative. The French are based in N’Djamena (Chad), but its troops have been fighting across the Sahel.

In the aftermath of the death of the four US soldiers, the US State Department has pledged $60 million toward the G5 regional counter-terrorism force. On Monday, US Secretary of State Rex Tillerson described the five countries in the G5 Sahel force as ‘regional partners.’ ‘This is a fight that we must win,’ Tillerson said. ‘These funds will play a key role in achieving that mission.’ The United States had been loath to support this force earlier because of the United Nations role in the mission. Even now, Tillerson will not join French Foreign Minister Jean-Yves Le Drian at a meeting on the G5 Sahel mission at the UN. Nonetheless, the US will provide substantial financing for this counter-terrorism offensive.

These funds are not the totality of the US effort. There is also the US $100 million drone base being built in Agadez (Niger), which comes atop the earlier base that the US had built in that country to assist the French intervention in Mali from January 2013. There is also a US military installation in Niger’s capital Niamey, and there are a host of ‘secret’ US bases from Sierra Leone to Ethiopia. The residue of anti-colonial sentiment prevents even the most avid US ally from welcoming the US’s African Command (AFRICOM) to the continent (it is based in Stuttgart, Germany); although Liberia and Ethiopia have publically said that they would welcome the headquarters. AFRICOM oversees the US operations along the Sahel. Its stated goal is to combat terrorism, although it took part in the NATO war against Libya in 2011 – outside its stated mission.

In August, after the creation of the G5 Sahel force, I asked a Chadian official why the French had their base for this effort in Chad. He was circumspect. France had provided a great deal of money to this effort, which of course had been encouraged by Chad’s government. Counter-terrorism funding comes with much less supplication than development funds. It is true that Boko Haram had entered Chad from Nigeria into the Lake Chad region. But the threat posed by Boko Haram to Chad was minimal compared to its threat in Nigeria (the same official called me in October to ask why the Trump administration had put Chad on the travel ban and not Mali, Niger and Nigeria). Last year, Boko Haram conducted 120 attacks in Nigeria and only 4 attacks in Chad. Why were the French in Chad and not in Mali or Niger? Was terrorism the real reason for G5 Sahel force and for the new American escalation into the Sahel?

Last week, I showed that terrorism might not be the most pressing problem in the region. Apart from poverty, there are a host of problems for the Sahel such as the desiccation of the Sahara Desert and the dangers posed to the states by smugglers of different commodities (such as cocaine, guns and humans).

The problem of drought and the growing Sahara Desert had been clear as early as the United Nations Conference on Desertification, held in Nairobi in 1977, and then again in the United Nations Convention to Combat Desertification in 1994. The role of desertification in the conflict in Darfur (Sudan) has always been underplayed. To highlight it is to look carefully at the destruction of the planet’s climate by carbon capitalism. The role of desertification is central to the conflicts that have now come to define parts of the Sahel, as the Sahara Desert moves south.

As the Sahel yields less from agriculture, some sections of the population have moved towards forms of smuggling. Narco-trafficking is a major problem in the region, with South American cocaine mafias now in residence in parts of this region. In 2012, the UN Office of Drugs and Crime estimated that thirty tons of South American cocaine came across the Sahel to Europe. This earned the mafias about $1.2 billion in profit. These smugglers make a great deal more money than made by Mokhtar Belmokhtar’s al-Qaeda group which funds itself by smuggling cigarettes across North Africa.

The UN and the local governments have been actively fighting the smugglers, with arrests now a regular feature. On September 6, officials from Niger and the UN arrested a smuggler who had 1 kg. of cocaine on his person, while in Mali the Office Central des Stupéfiants arrested a smuggler who had ingested 106 pellets of cocaine (weight 1.8 kg). On the roads of Mali and Niger, the UN and the local authorities have been making arrests of drug traffickers and of human smugglers.

The pressure on the smugglers, says the Chadian official, has created a great deal of tension across the Sahel. The smugglers have been attacking army personnel and interdiction officers who come to investigate smuggling routes. It is more than likely that it was smugglers who fired at the US patrol in Niger.

What are the US and the French doing building a wall on the southern border of the Sahara Desert with their bases and their troops? This not so much about the War on Terror, but about a mechanism to control the breakdown of state authority in a region as a result of intractable poverty and the desiccation of the Sahara Desert. The military has no solution to this problem. It will simply go to war against smugglers and the poor, which will turn more of them to the extremists of one kind or another. Peace deals – such as between the government of Mali and the Tuareg rebels of its north hang on a thread. More of this War on Terror will likely crack these deals and inaugurate a war of all against all in the Sahel. This is a scenario crafted out of a nightmare.