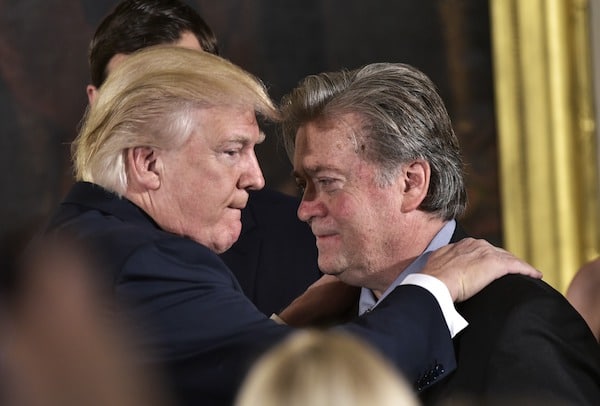 Writing in the October 28 New York Times, conservative columnist David Brooks said the preceding week was “when Donald Trump and Steve Bannon solidified their grip on the Republican Party and America’s national government”.

Brooks speaks for the Republican establishment — and sorely deplores this development.

Bannon has been the driving force behind Breitbart News, which he proudly claims is an outlet for the white nationalist and authoritarian “alt-right”. Trump hired him to take over his campaign in the final months before his election. Bannon became an official advisor to Trump at the White House after he won.

When Bannon left the White House in August, many “progressives” hoped that would mean that Trump was turning away from Bannon’s extreme racism, economic nationalism and advocacy of “strong man” rule.

This hope has been dashed. Bannon returned to Breitbart, and launched a campaign within the Republican Party to fight all Republicans deemed not supportive enough of Trump. It has turned out that there was no split between Trump and Bannon, rather a division of labour.

What this meant was exemplified in the Alabama Republican primary election in September. This was held in preparation for an election to replace Senator Jeff Sessions, whose seat was vacated when he became Trump’s attorney-general.

In the primary, Bannon endorsed Roy Moore, who may be best described as “slightly to the right of Attila the Hun”, in the words of one song in the musical Evita. Trump endorsed his opponent, Luther Strange, who had been appointed by the Alabama governor to temporarily fill Sessions’ seat until the election.

To counter Bannon’s endorsement, Strange loudly proclaimed that it was he, not Moore, who was the real Trumpist. In other words, heads, Trump won, tails Trump won. When Moore trounced Strange by 55% to 44%, Trump, with a grin, said he guessed he was wrong to endorse Strange and that Moore was a “great guy”.

This dynamic, with the Republican establishment candidate embracing Trump under the whip of Bannon’s endorsement of his opponent, has set the stage for a new struggle in the Republican Party. The result has been that the “establishment” has given way, abandoning their former critical stance towards Trump “as the GOP tilts to Trump’s orbit” — as another NYT headline put it.

Brooks said: “The polls show that if you want to win a Republican primary these days, you have to embrace the Trump narrative … The Republican senators went to the White House [last week] and saw a president so repetitive and rambling, some thought he might be suffering from early Alzheimer’s.

“But they know the way the wind is blowing. They gave him a standing ovation.”

Another example is Senator Lindsey Graham, formerly a sometime Trump critic, who has now joined the Trump bandwagon. Graham said he was trying to help Trump turn his “message into legislative success”. He added “I think what Trump sees in me is a guy that is willing to try to make something happen. I’m willing to do things that sometimes other Republicans won’t.

“I’m going to stay in a position where I can have input to the president. I can help him where I can, and he will call me up and pick my brain.

“Now, if you are a good United States senator, that’s a good place to find yourself.”

What underlies this development is that polls, which have sometimes understated Trump’s support, show that Trump has an approval rating among Republicans of 83%. A large proportion of these comprise Trump’s hard base.

Bannon has emerged as a player capable of reaching and mobilising this base. For this reason, he creates fear and trembling in the Republican establishment.

A few Republican senators continue to sharply criticise Trump. The most important have been John McCain, Bob Corker and Jeff Flake. But these are quitting the fray.

Flake was targeted by Bannon, and his numbers were so low he has dropped outvying for the Republican nomination in his state in 2018. McCain has brain cancer, leaving him out of the main game. They are bleating from the sidelines.

Trump’s drive against the establishment of both parties was clear from the start of his campaign to win the Republican nomination. His announcement of his intention to run was accompanied by open racist attacks on Mexicans, calling them rapists and drug dealers. This was blunter than the stance of the party tops.

Since the start of their “Southern strategy” after the victories of the Black struggle in the 1960s-70s, Republicans have sought to win the white racist vote. However, they generally preferred not to make their efforts too open, making use of sly innuendos to “dog whistle” their racism. Trump’s unabashed, open racism embarrassed them.

The establishments of both parties acted as if they were blind to the economic plight of the working and middle classes that developed in the mid 1970s and became especially acute in the Great Recession and its aftermath. These politicians stood for the status quo, with some differences between them, but the vast majority of the population knows the status quo does not work for them.

Bernie Sanders and Trump both understood this, and broke with the status quo in both parties, although with opposite platforms. Sanders campaigned to the left of the Democratic establishment with pro-working class reforms, but Trump made demagogic appeals to workers and the middle class. He promised he could cut through the disarray in Washington by establishing his rule as a “strong man” — and blaming Blacks, immigrants and Latinos for white workers’ problems.

The Republican field of candidates seeking the nomination initially consisted of 17. In the course of the televised debates and then the primaries, Trump succeeded in convincing a majority of Republican voters that he could step in as a strongman against these “weaklings and losers” and take charge to solve the US’s problems.

As Trump’s first term developed after the election, the Republican establishment sought to fight back. Republicans increasingly criticised his most blatant lies and extreme positions. Trump always fired back with personal attacks.

Many media commentators claimed Trump was shooting himself in the foot, because he needed the establishment to win votes in Congress. But recent developments seem to show that they need Trump more than he needs them.

Having consolidated their grip on the Republicans, Trump and Bannon will seek to further their reactionary agenda and drive towards establishing authoritarian rule with democratic trappings — such as can be seen with the governments in Hungary and Poland today.

Removing Trump would inflame his base, which consists of white racists of all classes. Bannon would capitalise on this to further build what he calls his “movement”.