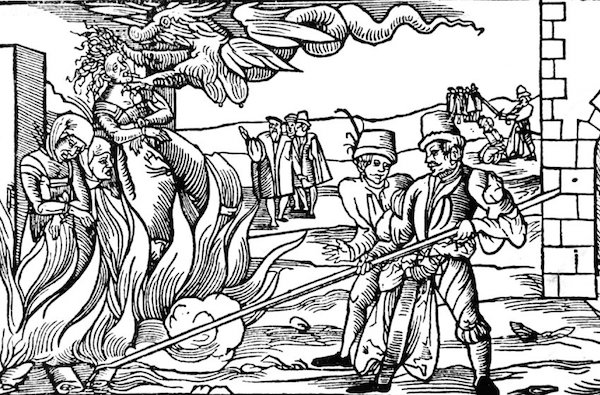 In high school, like many young women, my friends and I developed a fascination with witches. Years before we knew what feminism was, a sense of foreboding had developed among us, about our place in the world and our power relative to adults and to our male peers. As ambitious teen girls wary of how we were perceived in the adult world, we sought solace in the idea that we could harness a secret and subversive power to change things. After school we concocted potions, conducted rituals and created secret languages. For a time we believed in magic. 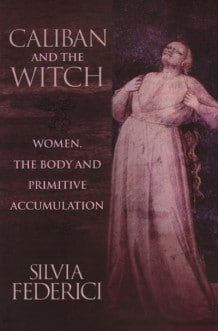 Unknown to us, in her ground-breaking book, Caliban and The Witch, Silvia Federici argues that the witch hunts of the sixteenth- and seventeenth-centuries served to create and enforce a newly established role in society for women, who were consigned to unpaid reproductive labour to satisfy the needs of an ascendant capitalist order. Published in 2004 and based on a research project started in the 1970s with Italian feminist Leopoldina Fortunati, Federici draws upon an eclectic mix of historical sources, re-reading the transition to capitalism from a Marxist-feminist viewpoint.

Federici presents a close reading of the European witch-hunts, in order to re-appraise the function and nature of primitive accumulation in the transition from feudalism to capitalism. Her most important contribution in this regard is to reveal the mechanisms by which production was separated from reproduction, and how the resulting sexual division of labour had to be created and enforced through extreme violence. This account of primitive accumulation challenges Marx and other subsequent interpretations of the transition to capitalism as a progressive and necessary shift in social relations. Federici foregrounds the experience of women (painted as witches) and colonised people (the metaphorical Caliban, from Shakespheare’s Tempest) to show that this was in no way a progressive moment in changing social relations and that at every stage of capitalist expansion, new rounds of primitive accumulation involving violence and expropriation of land can be observed.

One of the most devastating parts about reading Caliban and the Witch is the recognition of everything that women lost in terms of social power in the transition to capitalism. Witches embodied everything “that capitalism had to destroy: the heretic, the healer, the disobedient wife, the woman who dared to live alone, the obeha woman who poisoned the master’s food and inspired the slaves to revolt” (p. 11). Federici documents the changes in women’s social status, how they were encouraged not to walk alone on the streets or sit outside their homes, how ale-brewing (traditionally women’s work) came to be seen as men’s work, how the word gossip shifted its meaning from ‘friend’ to acquire a negative connotation (also see Hanna Black who has written more about the etymology of the word gossip in this context here). This all formed a part of the “intense process of social degradation” women were forced to undergo, in order to be remade in the image of capital (p. 100). 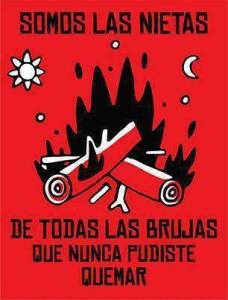 One revelation of this book is that in numerous ways, women refused to take their place in the emerging capitalist reordering of society, just as they refused the reconstitution of the body as a machine. Women tore down hedges and fences and reclaimed the commons, they engaged in non-reproductive sex and led peasant revolts. They met at night on hilltops, around bonfires, stole food and clothing, and they gossiped. Federici argues that the witch hunts, rather than representing the last dying breaths of feudal order and the attendant superstitions of feudal societies, were a tool to discipline and shape the emerging working class and hence were integral to the transition to capitalism. Federici concludes that only by ignoring the experience of women, slaves and indigenous people in the transition to capitalism can primitive accumulation be viewed as progressive. The women singled out for public burning were often poor peasants accused by their landlords or other wealthy community members of witchcraft, which Federici links to documented instances of poor women begging for or stealing food. As Federici notes, “the witch-hunt grew in a social environment where the ‘better sorts’ were living in constant fear of the ‘lower classes’” and their potential for insubordination (p. 173).

Throughout the book Federici shifts between centuries, sometimes bringing us all the way to the present, in order to show how this violence continues in the form of structural adjustment programs and in new rounds of land enclosures in developing countries. In seeking to uncover a “hidden history that needs to be made visible” Federici foregrounds the “secret” of capitalism, women’s unpaid reproductive work, slavery and colonisation (p. 13). The use of violence in the witch hunts, allowed the state to establish a level of control over women’s bodies and lives that was unprecedented, as seen in the rise of census taking and population monitoring, and the demonising of abortion and contraceptives. Federici further argues that “the persecution of the witches was the climax of the state intervention against the proletarian body in the modern era” and that the “human body… was the first machine invented by capitalism” (pp. 143, 146). That the violence of slavery and colonisation in the New World was parallel to the patriarchal violence of Europe is a difficult argument to make and is one of the more unconvincing parts of Federici’s book. The relation between early capitalism and slavery and genocide is an area well explored by historians and critical race scholars, which could have been better utilised to extend the appraisal of primitive accumulation from the point of view of colonised people and slaves.

The members of this semester’s Past & Present Reading Group had diverse reactions to Caliban and the Witch. The book stimulated lively and important discussions about feminist re-readings of history, questions about the nature of feudal life, and critiques of Federici’s comparison between patriarchal oppression and white supremacy. Most of all Federici inspired a desire to question many other theories of history, to take her analysis even further back in time and trace developments in ideologies of racism, white supremacy, misogyny and witch hunting prior to early capitalism. The group ultimately received the book as it was given, that is, as a ‘sketch’ of a theory, needing further exploration and refinement, but powerful nonetheless. 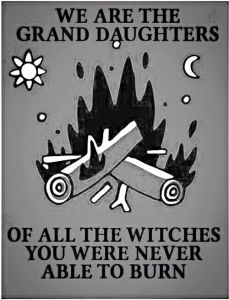 The horrifying scale and brutality of the witch hunts is difficult to comprehend, especially given their status as “one of the most understudied phenomena in European history” (p. 163). In an ironic twist of fate (and clearly inspired by Charmed and Sabrina the Teenage Witch), my friends and I embraced the idea of magic without fear that the charge of witchcraft would lead to our torture and death. Perhaps this is because today women’s unpaid reproductive labour is so immutable, capitalists no longer perceive witchcraft to be a threat to the sexual division of labour within firmly capitalist social relations of production. However, this does not mean that new, if at times more subtle forms of subordination and control of women aren’t apparent. On the contrary, renewed attacks on reproductive rights and rights to bodily autonomy, the violation of livelihood rights by mining and agricultural companies in developing countries, and the daily assault by the state on indigenous lives in Australia and black lives in the U.S, all work in different ways to reaffirm the marginalised status of women and people of colour (Alicia Garza, one of the founders of Black Lives Matter, has written powerfully on this subject and others here).

Caliban and the Witch is a reminder that it is the task of feminists and Marxists alike to demand that the sphere of reproduction and continuing forms of colonialism be seen as key sources of value for capitalism and therefore as key sites of struggle against it.