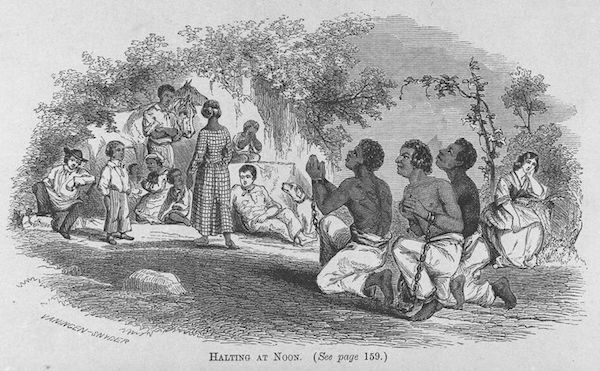 In A Black Theology of Liberation, James H. Cone controversially asserted, “If God is not for us, if God is not against white racists, then God is a murderer, and we had better kill God. The task of black theology is to kill gods that do not belong to the black community; and by taking black history as a source, we know that this is neither an easy nor a sentimental task but an awesome responsibility.” Cone’s threat of deicide is one of his most frequently misunderstood and frequently criticized assertions. Often misconstrued as a rejection of Christian orthodoxy, Cone’s assertion is instead a challenge to the notion of a white God who either sits idly by or supports the oppression of black people. Cone instead contrasts this with a vision of a God who is intimately involved in the suffering and liberation of black and other oppressed peoples. And, as Jared Hickman demonstrates in his new book Black Prometheus: Race and Radicalism in the Age of Atlantic Slavery, this motif of liberation as a rebellion against the gods is one with origins in ancient mythology and its applications have deep and pervasive roots in the history of thought on race and liberation.

The origins of the myth of Prometheus are unclear and the story is never told in full in any of the ancient sources. Instead, various aspects of the Promethean mythos are retold and applied with variations in emphasis by a host of ancient writers, including Hesiod (8th century BCE) and Aeschylus (5th/4th century BCE). What all of the retellings of the myths hold in common is the presentation of Prometheus as a figure who stands in defiance of the reign of Zeus and the other gods of Mount Olympus. He is instead a partisan of the Titans, the older gods whose reign was overthrown by the Olympians. He is also frequently represented as possessing a certain tenderness toward humankind, working to counter the cruelty and indifference of the Olympian gods to the lives and sufferings of humans. 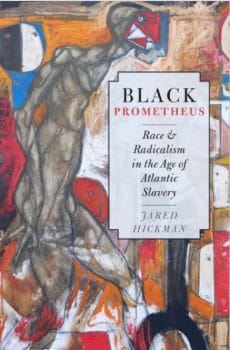 In one early myth, Prometheus tricks Zeus into accepting the fat and bones of animals as sacrifices, leaving the nutritious meat to the humans to consume. In another myth—perhaps the most famous of the Promethean myths—Prometheus is able to steal fire from the Olympians and give it to humans. The gift of fire becomes for humans the means by which they will build civilizations, allowing them to cook their food and forge metal tools. Prometheus’s theft is punished with characteristic cruelty by Zeus, however; he is chained to a mountainside in the Caucasus where an eagle picks at his liver for eternity. The Athenian playwright Aeschylus presents Prometheus in this state of suffering but in eternal defiance of the rule of Zeus. Prometheus at last predicts that another will eventually rise up to overthrow the reign of Zeus.

The defiance of Prometheus became an important symbol of the cultural and technological revolutions of the early modern era. Mary Shelley wrote of the Promethean spirit of the times in her novel Frankenstein, or the Modern Prometheus (1818). Her husband, the Romantic poet Percy Bysshe Shelley, wrote Prometheus Unbound (1820), a lyrical drama which imagines the fall of Zeus and the release of Prometheus from his punishments. The symbolism of Prometheus was a dominant theme not only in literature and poetry, but in political and social commentary as well. Marx, for example, had himself depicted in his own newspaper as a Prometheus being pecked at by the Prussian eagle (132).

Hickman brings to the fore the use of Promethean symbolism by abolitionists and others in the struggle for black liberation, framing the debate in terms of the racialization of Prometheus and, through Prometheus’s symbolism, of modernity itself. The myth of Prometheus itself contains the seeds of the divergent claims to the Promethean legacy by, on the one hand, black liberationists and abolitionists and, on the other hand, white Euro-Christians. Within the myth, both Africa and the Caucasus (the imagined origin of white Europeans) are associated with Prometheus (3). Because mythmaking is one of the means by which humans attain mastery over their environments, attempts to claim him for one or the other are intimately tied to assertions about race and modernity (4). An African Prometheus opens the possibility to black uprising against white oppressors. A Caucasian Prometheus reorients Prometheus within the paradigm of the white Euro-Christianity and works to exclude Africans. Hickman therefore frames his discussion in terms of the opposition between those who would Africanize Prometheus and those who would have a Caucasian Prometheus and the tension between the two as a struggle over the definition of modernity. 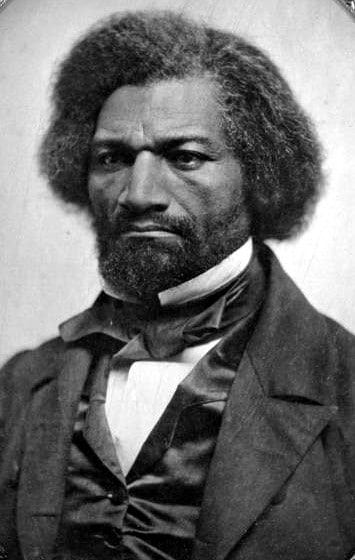 Ranged on the side of the Africanizers, according to Hickman, are figures such as Frederick Douglass and Benjamin Banneker. In a challenge to the Eurocentric framework of Hegel and Marx’s Prometheanism, in his second autobiography, My Bondage and My Freedom, Douglass enters into a Romantic Prometheanism that creates “a mythic space in which gods, demigods, and humans mingle on what is effectively rendered as the same plan” (146). In so doing, Douglass provides “a representational scheme wherein one could crowd out the transcendent altogether but, crucially, not the gods” (emphasis in original). By introducing elements of African religiosity which emphasize the imminence of the gods, Douglass calls into question the Euro-Christian framework of divine transcendence and therefore the claims of white Euro-Christians to absolute truth, absolute freedom, and absolute hegemony.

Similarly, “Banneker candidly professes to be a Promethean astronomer who unabashedly covets knowledge of celestial mysteries” (178). As a means of subverting white claims to intellectual superiority, Banneker consciously fashioned a self-image which encompassed and emphasized both his scientific genius and his African ancestry as two complimentary elements of his personality. In insisting on the link to African origins of both his “color and character” (182), Banneker points to himself as a black Prometheus, an African bringer of divine fire to humankind.

Many whites saw this Black Prometheanism as dangerous. If Prometheus can be identified as an African in rebellion against the white European gods of Olympus and their absolutist claims, the myth works to justify Black resistance and rebellion against slavery and other aspects of white hegemony. The myth, if Africanized, can, in fact, become the basis of violent uprisings by Blacks against white rule. Leaders of the Haitian Revolution, for example, adopted Promethean symbolism for their cause (66). 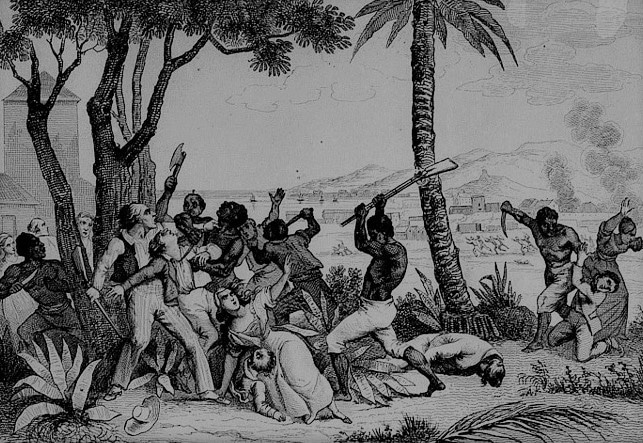 Depiction of the violent uprising of Black people during the Haitian Revolution in response to slavery and colonialism. (Incendie de la Plaine du Cap, Wikimedia Commons)

The search for a Caucasian Prometheus, however, often led to complicated territory in a world dominated militarily and politically by European powers and in which the rebels often defined themselves in terms that were distinctly non-European. Many white American and European commentators, for example, turned to the people of the Caucasus, the very mountains in which Prometheus was chained according to the myth and which were in the nineteenth century gradually becoming identified as the legendary homeland of white (“Caucasian”) people. “The celebration of the Caucasus’s physically brave and phenotypically white freedom-fighters seemed perfectly of a piece with the serendipitous restoration of the titan to a region being reinvented as the heartland of whiteness,” writes Hickman (266). Problematically, however, “the freedom-fighters were Islamic jihadists” fighting against Russian (and, therefore, European—even if only peripherally so) rule.

Hickman also engages in some Promethean Africanizing of his own. He proposes a reading of Shelley’s Frankenstein, for example, as a story of black Prometheanism in rebellion against white hegemonic claims (239). In this reading, “Mary’s novel performs an internal doubling and distortive mirroring of the Prometheus figure in Victor and the creature’s parallel quests for forbidden knowledge and domination of each other” (240). Victor becomes a Caucasian Prometheus and his creature an African Prometheus, each seeking to gain the upperhand through mastery of the other. “The novel’s mediation by a frame narrative that privileges Victor’s perspective and features an Arctic setting of encompassing whiteness evinces the extent to which the deck is stacked” in Victor’s favor and against the creature, however (240).

The mythologizing thought and rhetoric that sees in human struggles the pitting of god against god is as ancient as any human storytelling. Among the Greeks and in other ancient civilizations, this perception gave birth to the stories of Prometheus and other similar figures who lead the Titan resistance to the gods of Olympus. In early and medieval Christian theology, the Gnostics saw in the story of human sin and salvation a cosmic war between a good and an evil, or at least deeply flawed, god. More recently, Cone and other Black Theologians have seen in the history of black people the need to efface a white God who condones oppression and to replace him with a black God of the oppressed. Hickman’s book provides the link that ties the ancient and the modern together.