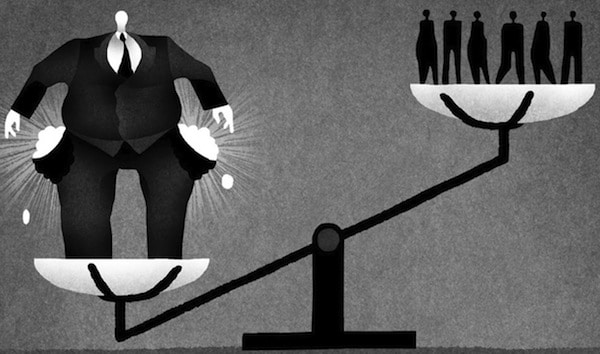 ‘What a Rigged Economy Looks Like’: Top 10% Now Own 77% of American Wealth

Yesterday, I looked at the enormous wealth of U.S. billionaires and the growing gap between them and the rest of the American people.

Today, I want to examine what’s happened in recent years at the bottom of the wealth pyramid.

We know that, for decades, the share of net personal wealth owned by the bottom 90 percent has been declining. It peaked at 38.5 percent in the mid-1980s and, by 2014, it had fallen to 27 percent—more or less where it started in the early 1960s. 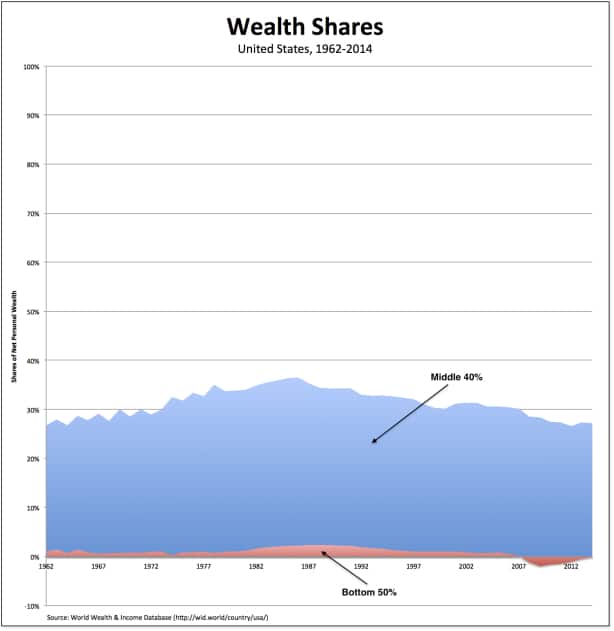 As is clear from the chart above, most of the change occurred for the middle 40 percent (the blue area), since the bottom 50 percent in the United States has owned very little personal wealth. Its share (the red area), which reached a peak in 1987 (2.4 percent), has since fallen below zero (-0.1 percent, in 2014).

Clearly, the small and declining share of wealth owned by the vast majority of Americans challenges the fundamental presumptions and promises of the country and its economic institutions—that American workers should and would share in the nation’s growing wealth. They haven’t and, if current trends continue, they won’t.

According to an analysis conducted by the Pew Research Center of the data contained in the most recent Survey of Consumer Finances by the Board of Governors of the Federal Reserve System, there is a large gap between the median net worth of white families ($171 thousand) and both black ($17.6 thousand) and Hispanic ($20.7 thousand) families—a gap that increased between 2013 and 2016. The white-black gap grew from $132,800 to $153,500 while the white-Hispanic gap increased from $132,200 to $150,300.

But for low-income Americans (those with size-adjusted household incomes less than two-thirds the median), the racial gap, while still large, has shrunk considerably since 2007, the year the most recent crash began. In that year, the white-black gap was 5 to 1 and the white-Hispanic gap almost 10 to 1. In 2016, those wealth gaps had fallen to less than 3 to 1 and 5 to 1, respectively.

As is clear from the chart above, the major reason for the decline in the racial wealth gap is the fact that the median wealth of low-income whites fell by more than half between 2007 and 2013, while the median wealth of both blacks and Hispanics decreased by much less (around 19 percent).

Economically, then, the crash and the uneven recovery moved low-income Americans—white, black, and Hispanic—much closer together at the bottom of the U.S. wealth pyramid. Politically, those changes created losses and resentments that affected the outcome of the presidential election of 2016, which in turn have made it difficult to challenge the conditions and consequences of the Second Gilded Age.