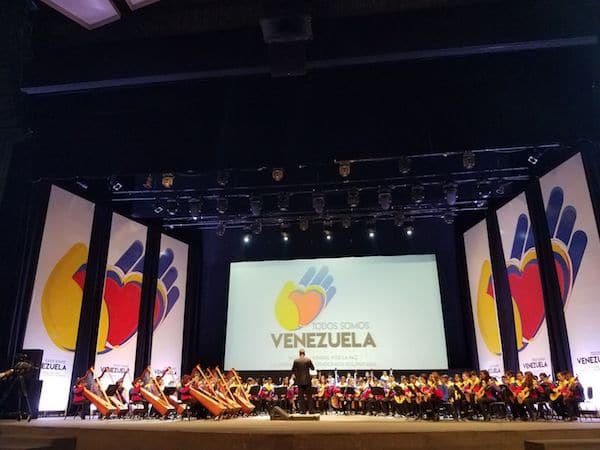 A slideshow of the event is included at the end of the article. —Eds.

Venezuela welcomed the international summit “We Are All Venezuela: Dialogue for Peace, Sovereignty and Bolivarian Democracy” this past weekend in Caracas with more than 300 participants from 60 countries representing five continents. This event comes in the wake of escalated actions by the Trump administration against Venezuela last month, including financial sanctions and threats of a “possible military option.”

“Defending Venezuela is to defend humanity and its right to exist,” declared Arreaza. He framed the current political, economic and social context in Venezuela, asserting that U.S. aggression against Venezuela started with the emergence of the Bolivarian Process. “In 1999, the Bolivarian Revolution rang the alarms of U.S. imperialism with our National Constituent Assembly. We criticized the U.S. and NATO bombings in Iraq and Afghanistan and later, we came up against the coup against Commander Chávez in 2002,” Arreaza continued.

The Minister of Foreign Affairs also denounced U.S. attacks against Venezuela in corporate media and its alliances with re-emergent right-wing governments in Latin America and the Caribbean as well as the European Union’s proposal to move forward with sanctions against the South American nation.

Dr. Sonya Gupta of the Center for European and Latin American Studies in New Delhi, India addressed the summit on behalf of the international delegates, affirming the urgency of international solidarity. “We are here to defend Venezuela because we see [the Bolivarian Process] as an example, a leader. The brave Venezuelan people are writing a new history, not just for Venezuela but for all of Latin America and the Caribbean. [Venezuela] is inviting us to build a new democracy, a popular democracy, a democracy in the streets,” she affirmed.

Saturday’s inaugural activities concluded with short documentaries covering the right-wing opposition violence that took place four months this year resulting in the deaths of at least 126 people in Venezuela.

“Venezuela witnessed four months of fascist violence, with some of the most horrendous forms of violence, where people were burnt alive simply for being or appearing Chavista, for being poor, Afro-descendant and Indigenous,” Rodríguez stated.

“These were terrible expressions of fascism and North American white supremacy. We are facing an empire that is based on racial supremacy,” she added.

Working groups presented their final results during a session moderated by Vice-Minister for International Communication William Castillo.  Among the proposals outlined were multilingual information and multimedia campaigns on the Bolivarian Revolution’s achievements and current context, solidarity brigades, legislative work against U.S. sanctions, electoral observation for the upcoming October regional elections, cross-border work between Venezuela and Colombia, as well as gatherings with Indigenous peoples. Likewise, the Dominican delegation announced they will commit to ongoing public demonstrations in solidarity with Venezuela as the Caribbean country continues to host talks between the national government and opposition.

Delegates additionally identified the first two weeks of October as global days in solidarity with Venezuela, calling upon organizations and communities around the world to host events accompanying Venezuela’s Day of Indigenous Resistance (October 12th) and the regional elections (October 15th).

“While capitalism and imperialism exist, the struggle will continue. [Venezuela], please know, that we will not abandon you, whatever the right-wing does or says,¨ proclaimed Morales. The Bolivian contingent represented the largest participation in this week’s events with 60 delegates, including coca farmers, miners, women’s rights activists, and Indigenous movements.

The rest of this week’s activities include visits to community councils and communes, public housing developments, the National Constituent Assembly as well as forums on civilian-military unity and anti-imperialist struggles.