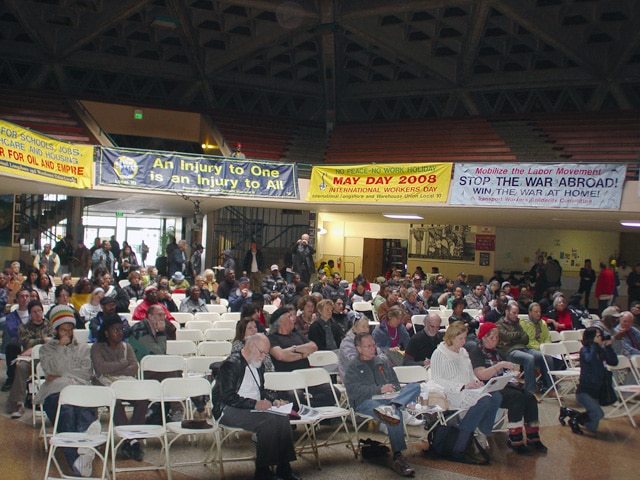 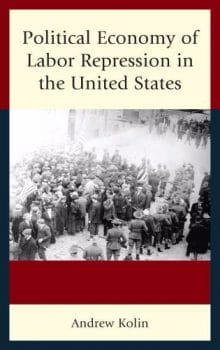 Andrew Kolin’s Political Economy of Labor Repression in the United States (Lexington Books, 2016) successfully demonstrates how labour repression is organic to capitalism; something that is central to the very constitution of the capitalist economy and its state. Traversing the history of the United States, the book is a survey of the evolving relationship between capital and labour and how repression has been (re)produced in and through that evolution – something that is structurally manifest in the institutional exclusion of labour. However, by presenting it as an expression of class struggle, the book refuses to deprive labour of its agency. It does not view labour as passive or even merely reactive. It suggests that insofar as the political economy of repression is composed through capital-labour interactions, it is contradictory and provides moments of escape or liberation from repression.

Pratyush Chandra and Pothik Ghosh talk to Andrew Kolin. Professor Kolin teaches Political Science at Hilbert College. His books include The Ethical Foundations of Hume’s Theory of Politics, One Family: Before and During the Holocaust, State Structure and Genocide and State Power and Democracy: Before and During the Presidency of G.W. Bush.

Radical Notes: Reading through the book, one gets a sense that perhaps the logic of capital-labour relations, or rather conflicts, has determined the course of the American history. Is this reading correct? Can it be justifiably claimed that the American state is a product of this logic?

Andrew Kolin: Prior to the Civil War, capital was in conflict with slave labour in the south and wage labour in the north. After the Civil War as industrialisation accelerated capital sought to maximise control over wage labour at the workplace. The great strike wave of the latter part of the 19th century was labour’s response to capital’s efforts to homogenise labour at the workplace. The extent to which capital could increase control over labour was determined by the economic cycles of American capitalism. Crushing strikes did not end class conflict, but only temporarily displaced it. During the Great Depression and with the New Deal, the goal was to have the state mediate class conflict. This worked fine until the 1970s when economic decline set in and the social welfare state was diminished. Starting in the 1980s, the state was no longer concerned with mediating capital and labour, and clearly focused, instead, on supporting finance capital.

Radical Notes: Although the book is mainly about the post-revolutionary institutions, what we find interesting is the way you discover their roots in the very operation of colonialism and waging of the anti-colonial struggle. How would you summarise the role of the politics of labour — its various segments, especially, waged, indentured and slave — in the American Revolution and the building of post-revolutionary institutions, both democratic and repressive?

Andrew Kolin: Property owners understood the need to mobilise labour in order to make the democratic revolution possible. The American Revolution allowed property owners to sever economic ties with Great Britain making it possible for them to put in place policies that supported economic expansion within North America. Most significant was that the well-to-do and labour worked together toward creating a democratic revolution. This in turn created responsive state governments that responded to the needs of the many, that is, until there was a realisation that the system of government should be reframed to better represent the interests of the propertied elites. The constitutional convention established a state structure that severely restricted labour from having a direct role in policymaking. What followed was that states working with property owners made it legally possible for the rise of the corporation. This was enabled by moving away from corporate charters, which were under state control, to the idea of the corporation as an independent legal entity with due-process rights.

Radical Notes: A crucial lesson that seems to come out from your analysis of labour repression in the US is that the tapestry of labour forms and technological changes that we find is actually capital’s mode of coping with the challenges that the working class poses. Do you agree?

Andrew Kolin: Labour repression past and present has been expressed by the organisation and reorganisation of the workplace, for purposes of controlling the labour process. The goal is to increase the production of surplus-value by speeding up the pace of work through technological innovation.

Radical Notes: How do you think segmentation, engineered through the mechanism of institutional inclusion-exclusion, has shaped the officialdom of the labour movement, or what many call, “labour aristocracy”?

Andrew Kolin: Institutional exclusion has divided labour into reform and radical segments. The AFL, under the leadership of Gompers and Green, and even the more progressive ‘CIO’ Lewis accepted capital’s monopoly of control over the workplace. This, in turn, forced labour leaders to function in partnership with capital toward the goal of achieving workplace harmony. Nonetheless, labour’s rank and file has been more progressive than its leadership, engaging in strikes and various forms of labour unrest without the support of labour leaders.

Radical Notes: Do you think the involvement of immigrant, semi-skilled and unskilled segments of workers time and again played a significant role in radicalising the American labour movement whenever it found itself mired in reformism and status quoism? What has been the impact of rank-and-file activism in the US?

Andrew Kolin: Looking back through the mid and latter parts of the 19th and 20th centuries, it was immigrants, semi-skilled and unskilled labour segments that were the force behind many of the great strikes. They were also heavily involved in creating the socialist and communist parties. These labour segments also fought against the greater imposition of technology at the workplace. Many of the major accomplishments of organised labour came from these rank-and-file activists. They supported not only the formation of the CIO, they agitated for many of the eventual New Deal reforms, which did result in better wages and working conditions.

Radical Notes: Throughout the history of labour repression and class struggle in the US that is narrated in the book, we see an interesting cyclicity of offence and defence, conflict and compromise. Can you see significant moments of leap in the history of the labour movement in the US that had the potential to radically break out of this cyclicity?

Andrew Kolin: Although the mainstay of labour repression has been labour’s institutional exclusion, labour has been successful in achieving a number of reformist demands. And even though radical labour segments have been oppressed, one finds within the capitalist economy the existence of non-capitalist enclaves in the form of public and worker ownership. The future challenge for organised labour is to increase the scope and scale of worker-based ownership, the basis for building a more radical form of economic democracy.

Radical Notes: Neoliberalism and the dominance of finance capital seem to have finally liberated capitalism from hurdles like democratisation and the impact of institutionalised/ territorialised working-class politics. What are “the limits of labor repression and possible options for the liberation of labor” today? What forms of organisation and working-class activities do you see emerging today that overcome the “legal boundaries” defined within and by the political economy of repression?

Andrew Kolin: There are two trends to consider in assessing the possible future limits of labour repression, one is the built-in feature of US capitalism—it cannot solve its problems. The persistence of the cyclical nature of American capitalism along with class struggle between capital and labour create the social effects pointing to an overall limit to a capitalist economy. A second trend is the existence on a limited scale of worker-based economic democracy. If it is to continue to grow, one can expect the appearance of an economy without labour repression. For example, key features would be that all goods and services would be produced by worker-managers. Companies would sell products for profit in a competitive market, in the absence of a class-based economic system. Each company would be owned and controlled by labour. Investments for expansion would be created by a tax on the company’s capital. Through a national fund, money would flow into the economy to public banks. The labourers in the banks would decide which projects were viable investments. Companies would be mandated to set aside monies to deal with modernisation and capital improvements. Since labour would monopolise decision-making the workers could reshape the companies or opt to leave but they could not make the companies sell capital in order to generate income. Minimum wages would have to be determined to be living wages. A company that could not pay workers a living wage would have to file for bankruptcy. All workers would be provided with a broad range of social services. This economic model has been put into practice at the Mondragon company in Spain. In the United States, there are no formal legal obstacles against labour forming a worker-based company.

Radical Notes: The ascendancy of Donald Trump and his politics of reactionary spectacle has often been ascribed to the rightward ideological shift of large sections of the White working class. How accurate is this ascription, and how would you explain this in political-economic terms? Also, in that context, how exactly do race relations currently function to segment and regiment social labour in its totality in the US? In your opinion, how has race historically functioned, if at all, in enabling and/or constituting what you call the “political economy of labor repression” in the US?

Andrew Kolin: I argue that this interpretation of a White, reactionary working class is incorrect. An interesting article appeared in the Washington Post on June 5, 2017, ‘It’s time to bust the myth: most Trump voters were not working class’. The authors cited the research findings of the American National Election Survey, which released its 2016 survey data. The conclusion was that over two-thirds of Trump voters came from the better-off half of the economy. Mainstream labour leadership supported the candidacy of Hilary Clinton. Trump did attract more working-class voters from the industrial belt, more out of desperation and a rejection of Clinton’s neoliberalism. As to the issue of race and the labour movement, the AFL had put in place policies that prevented people of colour from becoming union members. Racial tensions were heightened when people of colour were used as strike-breakers. Radical labour segments have been far more accepting of non-White workers. Recently, there have been some hopeful signs of mainstream labour breaking with its more racist past. Since the Sweeney era, the AFL-CIO has been more active in recruiting workers of colour. The AFL-CIO has supported the strikes of minority workers working for minimum wages as well as those seeking to increase the minimum wage to $15/hour. Organised labour is well-aware that its future is dependent on reaching out to and organising non-White workers.