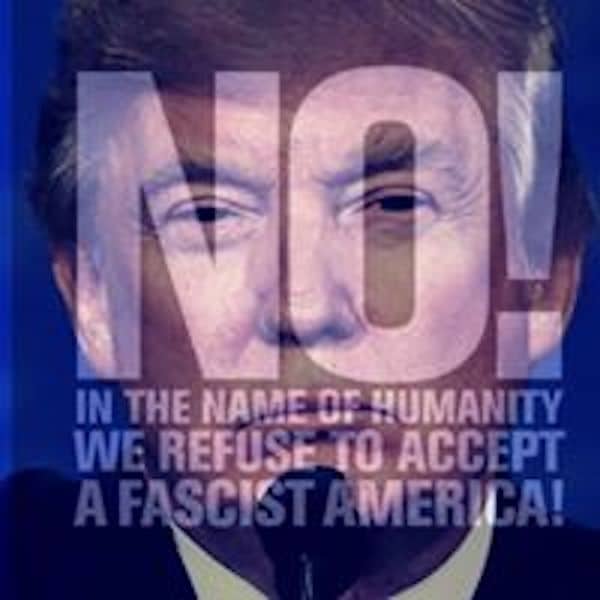 On Wednesday, Donald Trump used the bully pulpit of the U.S. presidency to spread neo-Nazi anti-Muslim propaganda to the world.  With three tweets, he elevated a white supremacist fascist group in England which has mobilized mosque invasions and publicly and pridefully harassed average Muslims on the street to the international stage.  But that is not all.  With a move straight out of the Nazi propaganda playbook, these tweets – which purported to show several groups of particular Muslims carrying out acts of brutality and religious bigotry – were used to portray all Muslims as dehumanized, barbaric enemies.

Make no mistake: this is NOT a “distraction.”  This is NOT just the president “acting crazy” or proving himself “unstable.”  There is a dangerous – truly, a genocidal – message being sent.

This is white supremacist, Judeo-Christian fascist propaganda – and it is not isolated.

It is consistent with Trump’s declaration that “Islam hates us” and his advocacy for a Muslim registry and a complete shut-down of Muslims entering the country.

It is consistent with Trump’s packing the courts with Christian fascist judges, Mike Pence’s theocratic Christian fundamentalism, and both Trump and Pence’s support for Roy Moore who was removed as a judge twice for illegally elevating “Biblical law” above the rulings of the Supreme Court.

It is consistent with Trump’s paid ads in 1989 calling for the death penalty to be brought back at the time of the railroad of the innocent Central Park Five, or his declaration that there were “fine people” amidst the murderous white supremacists in Charlottesville.

It is consistent with Trump calling Black NFL players who protest police brutality and murder “sons of bitches” and demanding that they be fired.

It is consistent with Trump’s chief of staff, John Kelly, upholding the Confederate General Robert E. Lee as an “honorable man.”

It is consistent with Trump’s adoration of Andrew Jackson – the notorious Indian-Killer and architect of the Trail of Tears – and standing in front of Jackson’s portrait as he hurled the name “Pocahontas” as a racist slur while addressing Navajo Code-Crackers just days ago.

History has shown where this kind of dehumanization and demonization leads.  No one can claim the innocence of ignorance.

Fascism terrorizes and targets group after group for repression, deportation, “conversion,” prison, or execution – often while seeking to reassure the rest of society that they will escape the horrors if they quietly go along and do not protest or resist.\Millions ache with horror of this cruel and brutal state-backed bigotry.  Many are raising their voices in disgust and outrage and correctly saying this is not normal.  But the cold truth is that this – and much, much worse – will become normal if this Regime is not stopped and there is only one way to stop it.  The people must act together to drive it from power.

Fortunately, there is an organization in this country that has, since the very beginning of this regime, identified it as fascist and called out the catastrophic danger it poses not only to people in this country but to all of humanity.  There is an organization in this country that has opened its arms wide to embrace and involve people coming from a great diversity of perspectives to act on the reality that only the people can stop this nightmare of fascism now being hammered into place – and that this can only be done by driving this regime from power through mass, nonviolent, political protest that does not stop until its demand is met: This Nightmare Must End: The Trump/Pence Regime Must Go!

That organization is Refuse Fascism – RefuseFascism.org

The hour is late.  The danger is clear.  Now is the time to overcome fear and uncertainty and to join with thousands and soon millions across this country to say: ENOUGH! In the Name of Humanity, We REFUSE to Accept a Fascist America!  This Nightmare Must End: The Trump/Pence Regime Must Go!