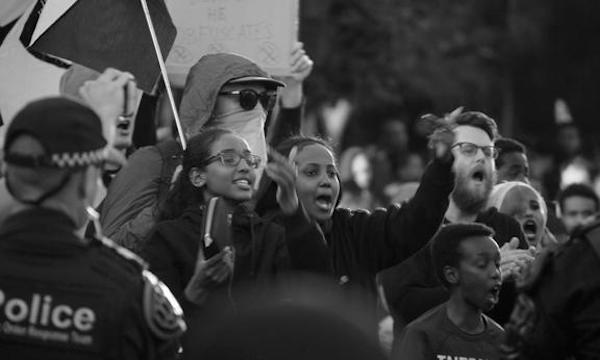 In defiance of police, out in force to facilitate a Nazi gathering, demonstrators congregated at the front of the Melbourne Pavilion nightclub on Racecourse Road and raised our voices in anti-racist protest for hours. The streets echoed with such chants as “Black, Indigenous, Arab, Asian and white! Unite! Unite! Unite to fight the right!”

Two locals brought megaphones from their flats and marched around chanting “No Nazis!” and “Get out!”. One young Muslim woman grabbed the megaphone from another activist and spoke about her experiences of Islamophobia in Australia. Several older women from the flats came down from their homes, walked to the police lines and chanted “Shame!” at the white supremacists being protected by riot police with capsicum spray at the ready.

A vicious darling of the US far right, Yiannopoulos arrived in Australia last week as part of his “Troll Academy” tour. Milo has made a career out of dressing up common racist, Islamophobic and sexist tropes in urbane witticisms. He claims that this ironic distance, that he is gay, has a Black partner and is of Jewish heritage makes charges of neo-Nazi sympathies out of order.

A recent Huffington Post investigative piece revealed that while working at Breitbart, a far right news website in the US, Milo consistently fed the outlet stories garnered from white supremacists. He also spent some of his off nights relaxing with the fascist Richard Spencer. Footage from a karaoke club showed him serenading a group of neo-Nazis while they sieg heiled just metres away.

In Australia, Milo’s shows have been replete with misogyny and racism. In Perth, he sang the praises of the British colonisation of Australia, saying that in history there are winners and losers – and Aboriginal people are losers. He then described Aboriginal culture as “shit”. He joked about how refugees dying in boats on the sea made good shark food. In light of the hundreds of souls who have been lost in the Mediterranean recently, such joking cannot be put down to bad taste.

Milo also railed against feminists, in particular Clementine Ford, who he called a “useful idiot” and “unfuckable”. Ford had clearly got under Milo’s skin when she refused to debate him. “I would never legitimise Milo’s existence or his Nazi links by appearing anywhere with him”, she said. The rest of the shows were devoted to extolling the virtues of classical “Western culture” (fascist much?) and attacking the “snowflakes” who find bigotry offensive. The crowds were rapturous.

The size of the audiences says something about the fertile ground for a new far right politics in Australia. There were more than 1,000 in Adelaide, 1,200 in Perth and anything up to 2,500 in Melbourne. He has two more shows in Sydney and one on the Gold Coast.

Clearly, Milo has tapped into a broader audience than those in existing far right organisations. He has given confidence to all those who yearn for an insouciant, urbane, more cleverly disguised form of far right politics. Young Liberals from the campuses, frat boys, overgrown gamers from their lounge rooms and ageing Trump lovers – they came to the shows in their hundreds.

Milo’s tour has allowed a public gathering of different strands of the far right.

Furthermore it has allowed these demographics to connect up with the existing far right. All the scum of the Victorian fascist scene were in Melbourne last night. The various fascist grouplets overcame their internecine squabbles to welcome Milo. He offered something they crave: publicity, notoriety and a new language to attack the left.

For these reasons, holding protests to counter the event was important. Those liberals who declared that protesting would only draw attention to Milo were wrong. He is getting media coverage, and lots of it, because his ideas bolster the status quo. Far from being a fringe provocateur who likes upsetting the establishment, Milo’s ideas are shared by plenty of people in the establishment. Their system is built on oppression and requires working class people to be pitted against each other.

Attacking the victims of capitalism – the poor, the oppressed, the vulnerable and the marginal – is key to the functioning of the system. Milo’s ideas are ones that the ruling class wants to popularise. Therefore, the idea that Milo is an oppressed victim of prevailing sensibilities who speaks truth to power is a reactionary bait and switch. Homophobes, racists and the far right often claim that they are part of a silent majority intimidated by the hegemonic left. This is a bizarre view of the world.

In protesting against Milo, we were attempting to counter his claims. We wanted to call him out for the neo-Nazi lover he is. We also wanted to galvanise opposition; to cohere and give confidence to anti-racist and anti-fascist forces.

Several hundred anti-fascist protesters mobilised. But what gave the protest in Melbourne added import was the location of Milo’s gig. While he and his millionaire backers could have chosen many places in the CBD to hold the meeting, they instead chose a venue opposite the Flemington and Kensington commission flats.

Hundreds of migrant, refugee and Muslim people live here; many saw this as a direct provocation. One resident said: “They could have gone anywhere. But here? In our backyard? We couldn’t let that happen”. Up to a couple of hundred of locals came and joined the rally at various points. Women, men, old and young, joined in. Their response was wonderful. It was defiant and angry.

Decades of racist policing at these flats has produced bitterness and anger toward Victoria Police. Another resident said: “If you had men with batons, with shields and helmets, ready for violence coming into your home, in your front garden, what would you do? Just let them in. No. This is self-defence”.

The media may well descend into hysterics over the next few days about “African youth violence” and “anti- fascist extremism”. This would come as no surprise. The familiar and banal narrative is that the right and the left, white supremacists and young migrants, are all as bad as each other. The so-called sensible centre is the preferred place of residence for liberal pundits.

No matter that, across the world, the far right is growing, that in Germany fascists are in the Bundestag for the first time since World War Two, that in Austria the far right has a stake in the government, and that in the US a fascist killed an anti-fascist protester.

The growth of the far right will not be stopped by the complacent self-regard of those who argue for moderation. To stay in the “sensible centre” is to accept the forces and conditions that have got us to this point. It has been the dominant centre in politics (of both conservative and social democratic hues) that has given us austerity, bank bailouts, tax cuts for the rich, racism toward migrants, concentration camps for refugees and a new police state targeting Muslims.

This mainstream climate breeds figures such as Milo and the open fascists who surround him. To challenge this state of affairs we need action. We need protest. We need to build a self confident anti-fascist movement not cowed and intimidated by claims that we “went too far”. We need radical anti-capitalist defiance.