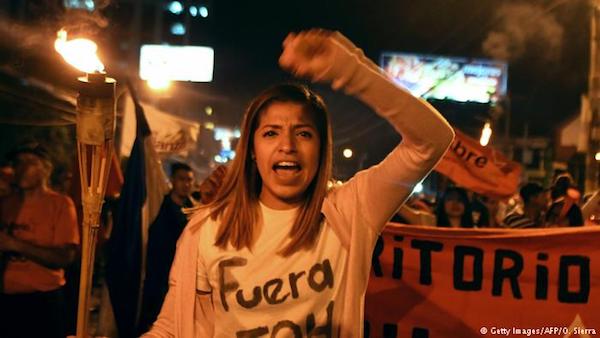 On November 26, the Honduran people went to the polls to elect their president for the next four years. Whilst in all the other elections in Honduras where the results were released the same day or the next morning, it has been 16 days and the Supreme Electoral Tribunal has yet to release the official results.

Since the votes were cast, the process has been full of irregularities. The first two days there was an “irreversible” tendency showing the victory of the opposition candidate Salvador Nasralla, and then all of the sudden the current president began to close the gap and the computer system of the Supreme Electoral Tribunal crashed. When it came back, the tendency reversed showing Juan Orlando Hernandez with a slight advantage which only increased in the following days.

In the face of this situation, the Honduran people have taken to the streets in the streets to denounce with indignation and anger against what many are calling fraudulent elections, keeping in mind that the very re-election of Juan Orlando Hernandez is in itself illegitimate.

On December 1, after several days of mass unrest in the streets, the Honduran government imposed a curfew from 6pm to 6am for the period of 10 days, different human rights organizations have denounced that the curfew has made the people even more vulnerable to human rights violations from the Public Force, that there have been higher rates of arbitrary detentions and that when they are detained the curfew makes access to legal aid and communication with their families much more difficult, as well as raids in people’s homes etc..

Despite this, the Honduran people have defied the curfew and manifested in diverse ways such as in their homes by banging pots and pans, otherwise known as a cacerolazo.

Diverse organizations and collectivities have also come together to engage in blockades of the major arteries and highways all over the country called “tomas”. Thousands of Hondurans have participated in different “tomas” effectively showing that things will not continue “business as usual” and manifesting their complete rejection of the government and its attempt to steal the elections. 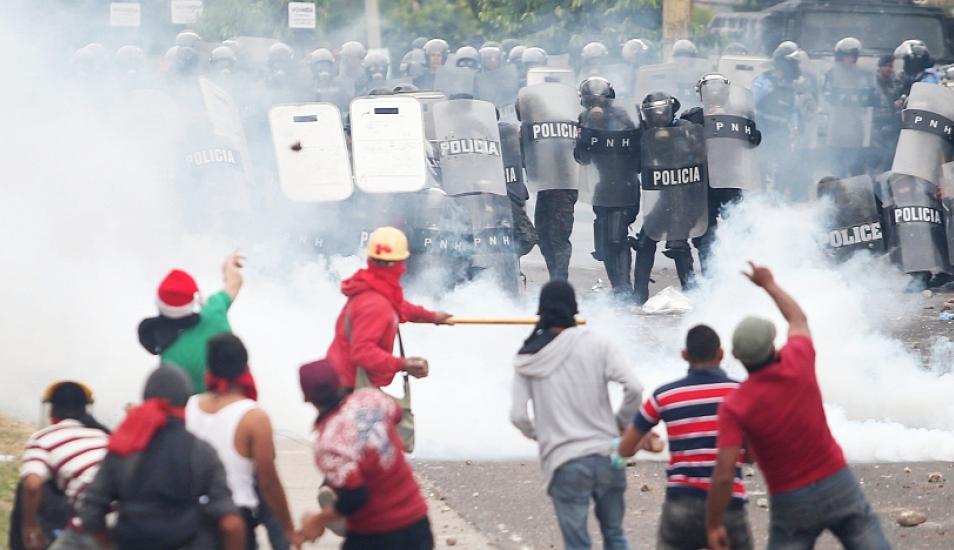 However, these diverse forms of mobilization have been met with heavy-handed repression by the state security forces. In a report issued by Amnesty International they estimate that at least 14 people have been killed and dozens have been wounded due to violence from the police and military forces against the protests. They also denounce that only one police officer has gone through a legal process for firing live ammunition at protesters. The Military Police have been largely responsible for these violations. Radio Progreso estimates that at least 800 people have been detained since December 1.

On Monday, the alternative radio station Radio Progreso suffered sabotage by criminal actors when their radio towers and antennas were completely torn down. Radio Progreso has played an important role through its constant denouncement of the current government, the process of electoral fraud and the repression towards the social movements and civil society as well as by amplifying the resistance of the Honduran people.

Today December 12, a bus and a car carrying members and leaders of the Honduran indigenous organization COPINH -Civic Council of Popular and Indigenous Organizations of Honduras- was retained by the military police and the military personnel took pictures of all of the people and their ID cards, violating their right to free expression and movement.

As a response to the violence and repression against the Honduran people, organized communities across the world like in Argentina, the US, Panama, Costa Rica, Nicaragua, Italy, Holland and more have stood in solidarity and joined the Honduran organizations in denouncing the electoral fraud.

On the other hand, institutions and states such as the United States and the Organization of American States -OAS- instead of denouncing the violence committed by the Honduran state have asked the Honduran people for calm and to respect the final election results when they are given.

These next days and weeks will continue to be critical for Honduras as the final agreements are being made about recounting the ballots, and it is likely that when the official results are given it will be another important moment in Honduras.

The Dawn, International Newsletter of Popular Struggles, is edited by Resumen Latinoamericano and Secretariat of the Continental Coalition of ALBA's Social Movement.
View all posts by The Dawn →

The Odious Iraqi Debt
The financial aristocrats will eat themselves