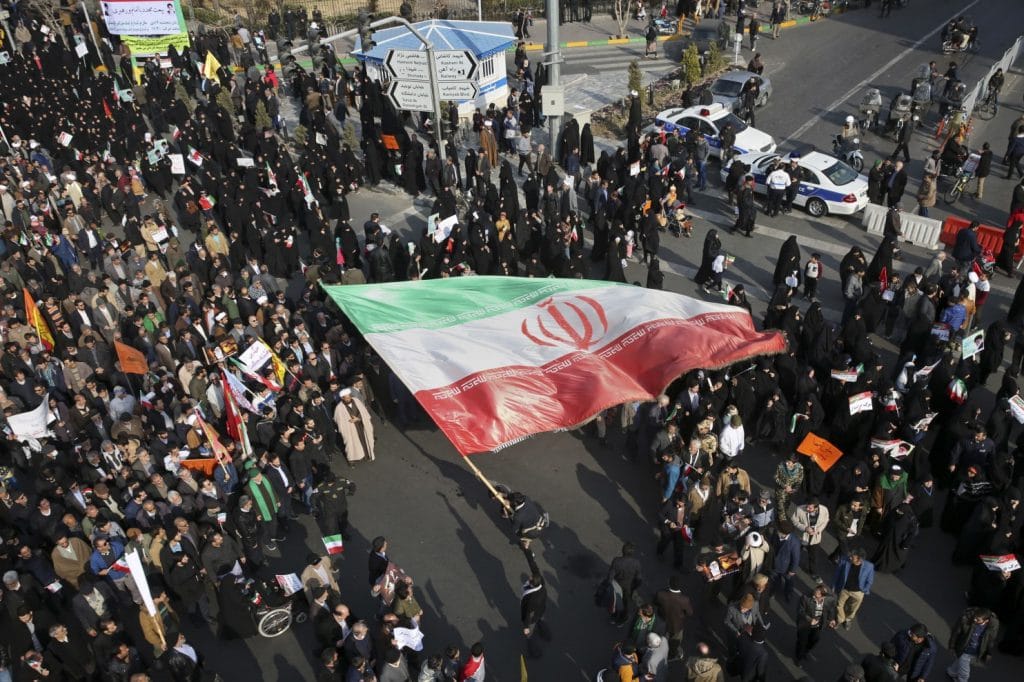 A demonstrator waves a huge Iranian flag during a pro-government rally in the northeastern city of Mashhad, Iran, Thursday, Jan. 4, 2018. From the Tasnim News Agency (Nima Najafzadeh/Tasnim News Agency via AP).

Since the outbreak of mass demonstrations and unrest in Iran last week, U.S. media have mostly busied themselves with the question of not if we should “do something,” but what, exactly, that something should be. As usual, it’s simply taken for granted the United States has a divine right to intervene in the affairs of Iran, under the vague blanket of “human rights” and “democracy promotion.” (The rare exception, such as an op-ed by ex-Obama official Philip Gordon—New York Times, 12/30/17—still accepted the premise of regime change: “I, too, want to see the government in Tehran weakened, moderated or even removed.”) With this axiom firmly established in Very Serious foreign policy circles, the next question becomes the nature, degree and scope of the “something” being done. 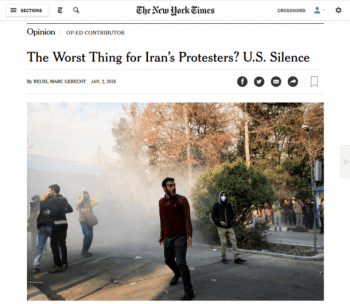 The New York Times (1/2/18) publishes mock concern for Iranian protesters from someone who once quipped: “I’ve written about 25,000 words about bombing Iran. Even my mom thinks I’ve gone too far.”

Leading the pack in the “do something” insta-consensus was the right-wing pro-Israel think tank Foundation for Defense of Democracies (FDD), which has overwhelmed the narrative. In the past five days, FDD has had op-eds in influential U.S. outlets like the Wall Street Journal, New York Times, New York Post and Politico, and has been quoted in a dozen more. Its punditry was marked by cynical “support” for Iranian protesters, demagoguing of the Iranian “regime” and disgust with the Obama-era Joint Comprehensive Plan of Action (JCPOA), otherwise known as the Iran deal.

The scrapping of JCPOA has been the primary political charge of FDD for years, and it seems to see the recent unrest in Iran—and any subsequent crackdown—as the thin moral pretext it needs to justify snuffing out a treaty it’s long opposed. Thus FDD has eagerly jumped on the unrest, painting itself as the sigh of the oppressed.

Op-eds written or co-written by FDD staff in the past five days:

A sampling of quotes by FDD staff in news reporting: 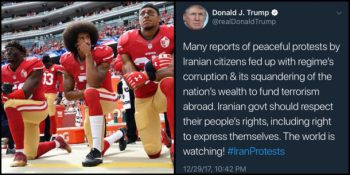 A Twitter user illustrated the irony of Trump calling for respect for the people’s right to express themselves—in Iran.

FDD op-eds and quotes followed a similar formula: express outrage on behalf of the protesters, applaud Trump for his hypocritical defense of the right to protest, and push for increased sanctions against Iran—often while taking a swipe at the hated Iran deal.

FDD’s pro-Iranian people posture was rarely accompanied by an explanation of their ideological project. The outfit—funded by big-name pro-Israel billionaires like casino mogul Sheldon Adelson, Home Depot founder Bernard Marcus (who’s said that “Iran is the devil”) and Wall Street speculator Paul Singer—are  largely presented as bespectacled academics calling balls and strikes without a particular agenda beyond their self-proclaimed “defense of democracies.” (The name ought to provoke some skepticism, given the group’s eagerness to enlist the hereditary dictatorship Saudi Arabia in its anti-Iranian crusade—LobeLog, 2/26/16.)

This problem is not unique to FDD; as FAIR (8/12/16) has noted before, the overreliance by the media on deeply conflicted think tanks that present as neutral but are, in reality, glorified lobbyists for a political cause or corporate cohort misleads readers on an institutional scale. (In FDD’s case, it’s Israel’s right wing; for the Center for Strategic and International Studies, it’s weapons contractors—FAIR.org, 5/8/17, 7/17/17.)

FDD, it’s worth noting, also worked closely with the Trump administration and CIA to curate documents implicating Iran in the 9/11 attacks, as part of a broader anti-Iran strategy that rogue DoJ lawyers spelled out in November in leaks to the Washington Post (11/17/17; FAIR.org, 11/24/17). 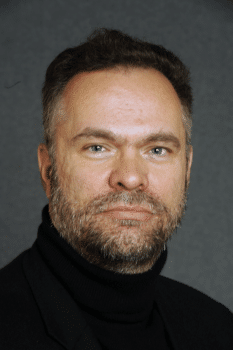 Occasionally, editors will note they are “conservative” or “hawkish,” but FDD is mostly presented as a quasi-academic and impartial observer. The average reader, for example, would probably be surprised to find out the FDD “fellow” expressing concern for The Iranian People™ in the Times, Reuel Marc Gerecht, has long joked about wanting to bomb these same Iranians. As Eli Clifton noted in LobeLog (1/4/18), in 2010 Gerecht quipped: “Counted up the other day: I’ve written about 25,000 words about bombing Iran. Even my mom thinks I’ve gone too far.”

Shouldn’t someone so self-admittedly obsessed with killing Iranians be disqualified from posing as their protector in a major U.S. newspaper? Failing that, shouldn’t readers be alerted that Gerecht was the director in the late ’90s of the Middle East Initiative at the Project for the New American Century—the most prominent advocacy group for the invasion of Iraq, a war that left 500,000 to a million dead?

Think tank addiction for overworked and often myopic reporters and editors has rendered such glaring questions unaskable. FDD are the “experts,” and the “experts” are needed to drive the bulk of commentary, regardless of their well-documented ulterior motives.