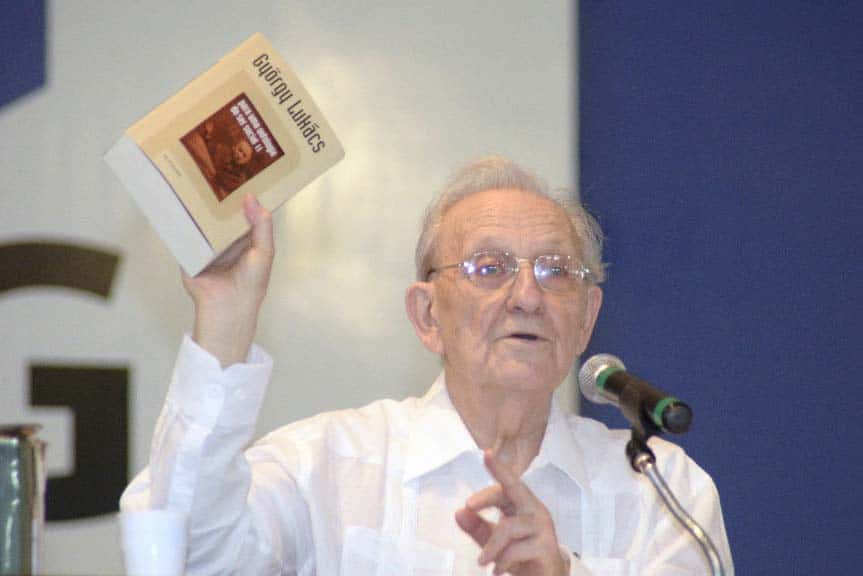 Since the collapse of the Berlin wall and the Soviet Union, many on the left seem to have swallowed the idea that there is no alternative to capitalism. Debate has been limited to what can (or rather cannot) be achieved within its confines. Here is a powerful book with the opposite message: What must be abolished is not only classical capitalist society but the reign of capital as such. Indeed, the Soviet example proves it is not enough to “expropriate the expropriators” if you do not uproot the domination of labor on which the rule of capital rests. An alternative exists, or more precisely, can be forged, provided it is radical and fundamental.

István Mészáros is especially suited for such global analysis. A young assistant to György Lukács, he left his native Hungary for England after the Soviet invasion and thus had no illusions about neo-Stalinism. Yet, unlike many emigrants from Eastern Europe, he was not so dazzled by Western wealth as to forget his principles. From his new vantage in the chair of philosophy at Sussex University, he examined the world through critical Marxist spectacles, producing such valuable studies as Marx’s Theory of Alienation and The Power of Ideology. But Beyond Capital is undoubtedly his magnum opus. Its ambition can be measured by the treble significance of the title. To get rid of capital, one must destroy its very foundations, not merely the superstructure. But we must also move beyond Das Kapital–first, because Marx never completed his project, leaving unwritten crucial chapters on the state and world trade, and second, in the century since Marx’s death, capital has shown both an unsuspected adaptability and a dangerous capacity to survive in spite of the fact that its ascending stage is over.

To develop his argument Mészáros must define the nature of capital’s rule, or what he aptly calls its metabolism. Based on the domination of capital over alienated labor, on the predominance of exchange over use value, it is driven forward by the imperative of expansion, but also rests on a hierarchical division of labor. In short, it is a system with its own logic and coherence; removing a part is not enough. The Russian revolutionaries eliminated big property owners, yet failed to attack the hierarchical structure by transferring power to working people, to the “associated producers.” After a time, the old mechanism for extracting surplus through essentially economic means was replaced by one relying mainly on political power, leaving workers in many respects more dominated than ever. That is why, when their experiment finally faltered, Russian rulers found it easy to climb on the bandwagon taking them back to the more classical rule of capital. Yet the emphasis on the system’s inner coherence and interdependence also explains why Western European efforts to change it gradually from within were sure to fail: The reforms in no way interfered with its metabolism. Thus, the analysis explains both the collapse of neo-Stalinism and the bankruptcy of social democracy.

Mészáros stresses the part played by the state, because its greatly increased role since Marx’s time accounts in large part for the capacity of capitalism to absorb oppositions and put off contradictions. Current stories about the vanishing of the state are fairy tales. It may no longer be the Keynesian instrument it once was for stimulating production or providing welfare, but it is still very much a pillar of the capitalist system, which would collapse overnight if it were withdrawn. The international dimension–globalization–is even more important. Mészáros quotes an interesting passage in which Marx wonders whether a socialist revolution in Western Europe would “not be necessarily crushed in this little corner of the world, since on a much larger terrain the development of bourgeois society is still in the ascendant”; Mészáros suggests that the revolution’s European failure was due essentially to this scope for capitalism to spread. Today, having conquered the entire planet, it may be at the end of its tether.

Indeed, for a while now, capitalism has lost its “civilizing” function as a ruthless but efficient, organizer of labor, and much of the book describes the harmful effects of this artificial survival. Just to get on, the system relies more and more on waste, on “planned obsolescence,” on arms production and the development of the military-industrial complex. At the same time, its uncontrollable drive to expand has by now had catastrophic consequences for natural resources and the environment. None of this prevents the system from manufacturing “superfluous labor,” that is to say, mass unemployment. And, as if to underline the gravity of its current crisis, capitalism for the past twenty years has been canceling all those concessions that, under the generic name of welfare state, supposedly justified its existence. This is not, though, the kind of book that at the end of such a description forecasts the system’s inevitable collapse and a socialist succession. All it says is the time is ripe for forging a genuine socialist alternative. It neither claims the opportunity will certainly be seized nor quite rules out that humankind could be driven to suicide.

I have summed up crudely what the book develops with theoretical sophistication, a wealth of information and lively polemical passages. Not all of it is easy reading. Mészáros can write with clarity and wit, particularly in his contemptuous dismissals of such establishment servants as “Margaret Thatcher’s guru and…Companion of Honour (1984), Friedrich August Hayek,” or of the turncoats belonging to “the league of abandoned hope” (a term invented by Maurice Merleau-Ponty, who, shortly after coining it, joined the club himself). More abstract parts, however, need closer attention. The English language is not so much allergic as it is unused to expressions of abstract ideas. Mészáros gets better at it from one publication to the next, but the problem cannot be eliminated altogether.

Yet for all its complexity, Beyond Capital is a carefully coherent construction, developing logically from Hegel to Hayek, enabling us to discover entirely new horizons. The long commentaries on Lukács are not only a case of a pupil coming to terms with his former master. They are needed to show how, sticking to the idea of socialism in a single country and the party as the instrument of social transformation, even a thinker as subtle as the author of History and Class Consciousness could not do justice to the Eastern European tragedy. I was particularly impressed by the way Mészáros includes ecology and women’s liberation in the socialist project, not in the name of some mythical left wooing votes but because they naturally belong. Establishment apologists tell us that globalization means the American way of life will gradually spread throughout the world. Just imagine China and India with three-car families! Such disastrous folly can be avoided only if the economy is taken over by “associated producers” who put quality above quantity and use value above exchange value, basing economic policy not on the exploitation of labor but on the saving of “disposable time.” For women the case is even more striking. One Marxist premise is that the proletariat is the only class vitally interested in the abolition of classes. This emancipatory vocation may be questioned on the ground that a working class may have its own interests. But women represent half of humanity; it is impossible to put equality at the top of your platform and be dissociated from their struggle. And the search for a genuine equality for women leads us to question the nuclear family and the function it performs in our society.

Beyond Capital is not beyond criticism. I think Mészáros underestimates the role played by Russia’s backwardness in the Soviet tragedy (though I agree with him entirely that even if a revolution took place in an advanced country, the serious problem of moving “beyond capital” would still have to be faced). Other readers will find different points of contention. It would be most valuable if the discussion centered on what is particularly original in the book–its attempt to outline the road toward a socialist society. Wisely, the author provides neither blueprint nor recipes. Yet from the fundamental contrast he draws between capital’s rule and the “associated producers,” one may draw conclusions about the nature of a political movement likely to advance the transition.

It cannot be primarily parliamentary because capital is essentially an extraparliamentary force. It must be driven from below because one of its main tasks is to attack hierarchical structure. It is bound to be internationalist, because its solutions are obviously global. Yet the most precious lesson of this book is the confrontation between two fundamentally opposed “metabolisms.” The rule of capital is presented as an integrated system, including all sorts of features built over time. The socialist project must be equally comprehensive. All its goals cannot be reached at once, but the movement, will have to embark on its journey with such a vision. And the attack on the hierarchical division of labor as well as the withering away of the state will have to start from the very beginning, if a new historic attempt is not to be thwarted like its predecessors. What remains to be found is the passage from theory to praxis, the solution to the old socialist dilemma: How do you mobilize people within the framework of existing society, while providing answers that take you beyond its confines?

I intended to call this book a Marxist monument, except monuments are associated with the past, while Beyond Capital is very much a work for the future, a tool, an instrument for struggle. To the question raised in the paragraph above, Mészáros would likely answer that what matters is that conditions now are more than ripe for seeking a socialist solution, while the shape any political organization takes will depend on the nature and scope of the social movement. At this stage, when the gap is tremendous between, on, one side, the immensity of the tasks and the danger of their non-fulfillment, and, on the other, the theoretical as well as political weakness of the bewildered left, the publication of such a book, not only profound in its analysis but also so passionately inspired by sympathy for the downtrodden and their struggle for liberation, may be a sign that a socialist revival is closer than we think.

Daniel Singer was The Nation's Paris-based Europe correspondent for over 20 years. He was born on September 26, 1926, in Warsaw and died on December 2, 2000, in Paris. He was a contributor to a number of periodicals, including: Monthly Review, The Economist, The New Statesman and the Tribune. He also appeared as a commentator on NPR, "Monitor Radio" and the BBC, as well as Canadian and Australian broadcasting. His books include, Prelude to Revolution: France in May 1968 (Hill & Wang, 1970); The Road to Gdansk (Monthly Review Press, 1981 [freely available online]); Is Socialism Doomed?: The Meaning of Mitterrand (Oxford, 1988) and Whose Millennium? Theirs or Ours? (Monthly Review Press, 1999). The Daniel Singer Millennium Prize Foundation was founded in 2000 to honor original essays that help further socialist ideas in the tradition of Daniel Singer.