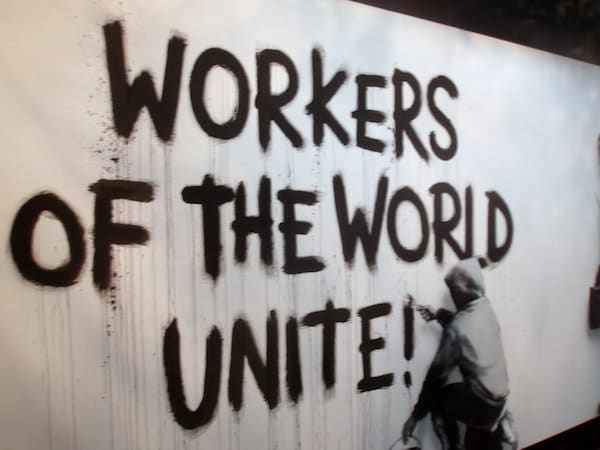 Before I go any further with this let me state that I’m not a Trotskyist, or a Leninist, or a Stalinist or a Maoist (but I might have been all of the above, with exception of Maoist, at one time or another). However, I might be a Zapatista, at least in spirit, but I’m definitely a Socialist Revolutionary (or is that a Revolutionary Socialist?). I’m not sure if I’m a Marxist either, but I’m definitely an admirer of the old man, he was a great artist and thinker, and possibly, along with Charles Darwin, the greatest mind of the 19th century. Whatever you call it, we need a socialist revolution and we need one now, we are running out of time!

I don’t think you need a crystal ball to figure out that capitalism is headed down the major war path, it’s displaying all the same pathological signs as it has done in past decades; economic crisis, economic collapse, repression abroad and repression at home. Increasing intolerance; increasing censorship of any opposition to the maniacs allegedly running things. This is how things were in the 1930s, when my folks cut their political teeth. Then it was the Spanish Civil War that was the trigger, the catalyst, the testing ground and we, that is the left, failed to stop it then and it looks like the ‘left’ or at least what’s left of it, are even less able to offer an alternative today. Where is our equivalent to the International Brigade that fought to defend Republican Spain?

And this time there is no Stalin to boss Communist Parties around (worse, there’s virtually no Communist Parties left to boss around) and tell them what to do in the mistaken notion that it would have defended the Soviet Union against Fascist invasion. Instead, and this is the tragedy of it, the left, or what laughingly calls itself the left, is bossing other countries around instead of dealing with its own failures to challenge capitalism, e.g., Syria, Libya, and other points East and South, obsessed as it is, with the spurious notion of ‘humanitarian intervention’ and attempting to manage other countries political struggles.

War solves, at least for the capitalist class, several fundamental and intractable contradictions that afflict capitalism:

1. The cyclical crisis of over-production and the related problem of the vast accumulation of surplus capital that needs to be consumed, spent, valorised, one way or the other, in order that yet more capital can be accumulated and set the entire monstrosity lurching off all over again;

2. The crisis of surplus labour, usually called unemployment, aggravated by machines and now computers and the obscenely misnamed ‘Artificial Intelligence’;

3. The crisis of competition between capitalist economies, now that there’s no Red Menace around and the incessant search for new markets (see War above);

4. And finally, the problem of the potential insurrection of working people when they finally see what’s in store for them once again (more on this below).

War, better still, general war solves all of these problems, for the capitalist class that is. War chows vast amounts of surplus capital in the form of weapons and infrastructure destruction and secondly, it deals with the ‘problem’ of all that surplus labour but unlike previous wars, rather than destroy the competing armies and the civilians, it now destroys only the civilians and the infrastructure. The advantages of this approach are obvious. Armies are now numerically small but highly trained and highly mechanised and it’s very expensive and above all, it’s time-consuming to replace all that flesh, brains and computers. Annihilating the civilian populations kills two birds with one stone as it were but leaves the armies (relatively) intact, ready to fight the next war.

Pax Americana! Rule Britannia! It’s the ultimate end-product of industrialising war, just as capitalism has industrialised everything else and trashed the planet in the process.

Of course, unlike previous slaughters, the next one will be the last and Engels prophetic forecast will finally be realised. It really will be the war to end all wars this time, and probably pretty much of what life is left on the planet at the same time. Now whether psychopaths like Trump and his insane ruling class (and let’s not forget their highly paid servants, who make it all possible) actually plan to turn the planet into a radioactive cinder in pursuit of aforesaid profits is a moot point, as if it actually does come to that, all discussion is over, in fact everything is over.

The really important thing is that, believe it or not, we can actually stop them, if we choose to. So what is stopping us from stopping them? Is it because we’re as suicidal and as shortsighted as the ruling class is? Like all honest socialists, I’m an optimist, I like to think that we are different from our rulers, that people are being misled, lied to, hooked on addiction to things by the all-devouring monster that is capitalism.

But it’s not inevitable, any more than revolution is inevitable. Can we break the addiction? It really does depend on us.

Of course it’s extremely dangerous to draw direct analogies with the past[1] but the common thread is capitalism, so you have to draw the obvious conclusion don’t you? Well don’t you? How can you escape the obvious when a man called Donald Trump heads up the most powerful, the most destructive society in all of history. So destructive and insane that it’s driven a goodly percentage of its population insane as well.

But Trump is no Adolf Hitler in spite of the similarities in outlook. Hitler’s raison d’être was lebensraum (living space) for a Greater Germany. U.S. capitalism’s is an unabashed desire for global domination. The current number of U.S. foreign bases is 1000, streets ahead of anything Hitler’s Germany achieved even at its height! And this doesn’t include the floating bases, the U.S. Navy’s aircraft carriers, 19 in total with 15 more planned that carry a total of between 1235-1330 warcraft and 142,500 personnel. There’s simply no comparison! Yet the economic motivation is in fact the same; economic domination or economic collapse, or Revolution.

The choice is yours and in a really bizarre, nay abhorrent way, perhaps we do have to thank Donald Trump (if it’s not too late to do so), for he has surely and finally revealed to us the true nature of capitalism in all its horrific barbarism. For Trump is no aberration, he is capitalism personified, just as Hitler’s Germany was brute force capitalism. The Emperor really does have no clothes. But note that even though he does embarrass the Guardian,  the New York Times and the BBC, they do their utmost to present things as business as usual, which it surely is of course. Think about that over your morning latté while you read the newspaper.

So how exactly, do we weld together a fractured working class, what’s left of a coopted trade union movement and bring onboard a compromised and divided middle class, half of whom (or more) get their pay check from the very system that’s destroying the ground we walk on? A divided Labour Party? One that’s stabbed us in the back so many times I’ve lost count?

We can however draw some conclusions from the Corbyns, the Maduros, the Syrizas, the Podemos’es et al, all of whom have failed or are in the process of failing like Corbyn and his traitorous Labour Party to produce a viable alternative to capitalism. Yet millions are currently putting their faith in Corbyn to deliver us from evil, just as millions put their faith in Syriza, only to be betrayed. Will a Corbyn-led Labour government betray us all over again? History says yes. So what do we have to do to avoid another betrayal, another debacle? To avoid another version of some kind of Fascism?

We don’t appear to have a clue as to how to go about it. No programme, no clear analysis, no way forward except our anger and our revulsion driving us in our frustrations but toward what end? My friend in NYC, wrote me this in response to my sending this essay (or something like it) for comments before I published:

Only by developing a revolutionary program.  So what’s our program? What’s our strategy that leads us to being able to implement the program. What are the tactics that build the strategy. It doesn’t get us far enough to say “we are the solution, we can change things.” How is the question demanding an answer. Does it mean supporting Podemos? Or Corbyn? Does it mean breaking with the notion that the “main enemy” is the US? Breaking with the nationalism that puts an ANC, a Maduro, in power? That put a Qaddafi in power? – S. Artesian in NYC.

What I can say is that currently we don’t have anything that even remotely resembles a programme that will stop the suicidal course capitalism is taking us on. What we do have are a thousand fractured visions, individualised struggles about this and about that, but nothing that ties them all together.

In addition, I can say that the way forward does not lie with Parliament, if anything, Parliament is an intrinsic part of the problem blocking the way forward. Yet popular insurrection isn’t the answer either, it will lead only to bloody defeat, just as it has in the past. Yes, part of the answer lies in taking our struggle to the streets but it’s only part of the solution. It is, if you like, a catalyst for change. A shot across the bows of capitalism but no more than that. The biggest march in British history in 2002 to try and stop the illegal invasion of Iraq in 2003, put not a dent in the process, so clearly it’s going to require a multi-pronged approach. But first we need a viable programme upon which to base our alternative to capitalism. And not only an alternative economic model, but the means by which to realise it. This requires us to disabuse ourselves of the capitalist notion of democracy, of voting every five years for essentially the same, professional political class, the so-called two-party system, or whatever it’s called in your country.

Somehow, we need to develop a structure that unites a thousand different struggles and do it if not simultaneously, then in a ‘cascade’ across the world system, well at the very least the seven, major imperialist states that control it.

A big ask you say? Well yes of course it is, but what’s the alternative? Armageddon? Definitely barbarism.

1. See Eric Walberg’s essay, ‘America 2018: postmodern ‘Germany 1933’, which I think makes the mistake of confusing form with substance but draw your own conclusions. This is not to say that there isn’t a parallel between 1939 and 2018, the question is, what do these parallels consist of and can we usefully draw conclusions from them?