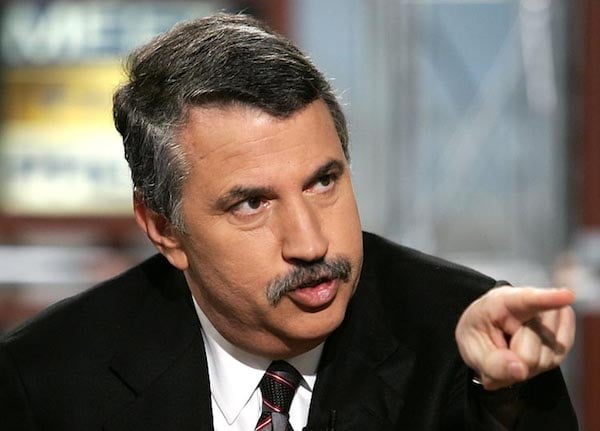 WASHINGTON – FEBRUARY 27: Columnist of the New York Times, Thomas Friedman, gestures as he attends a roundtable discussion on NBC’s ‘Meet the Press’ during a taping at the NBC studios February 27, 2005 in Washington, DC. Safire spoke about U.S. President George W. Bush’s recent trip to Europe. (Photo by Alex Wong/Getty Images)

Thomas Friedman had a column in the New York Times yesterday justifying the Israeli slaughter of Arab civilians. Israel needs to go “crazy” in its confrontation with Hezbollah and Iran in Lebanon and Syria because, “This is not Scandinavia.”

Friedman’s entire column is told from the Israeli perspective. Here is the most credulous passage, passing along Israeli propaganda about “ugly” and “brutal” methods as the necessity when you don’t live in Scandinavia.

So what’s Israel’s strategy to keep its conflict with Hezbollah and Iran on a low flame? First and foremost, it’s been to reinforce to Hezbollah and Iran, through many channels, that they can’t out-crazy Israel. That is, if Hezbollah and Iran think they can place rocket launchers in densely populated Lebanese and Syrian villages and towns — and expect that Israel will not take them out if it requires large collateral civilian casualties — they are as wrong today as they were in 2006.

Israeli military planners are more convinced than ever that the key reason Hezbollah has avoided major conflict with Israel since the big Israel-Hezbollah war in Lebanon in 2006 is that Israel’s Air Force — without mercy or restraint — pounded Lebanese infrastructure, Hezbollah offices and military targets in the southern suburbs of Beirut — not to kill civilians but not to be deterred by them, either, if they were nested amid Hezbollah weapons or headquarters.

Yes, it was ugly and brutal, say Israeli planners, but it worked. This is not Scandinavia. “The reality here starts where your imagination ends,” said one Israeli officer. Sometimes only crazy can stop crazy. And Hezbollah’s leader, Hassan Nasrallah, definitely got the message.

So Friedman claims that “pounding Lebanese infrastructure” without “mercy or constraint” is not intended to kill civilians. But it plainly is. Israeli leaders said just that in the Beirut 2006 context. Friedman never mentions the Dahiya doctrine developed by Israeli brass as a legitimate response to military threats: hitting civilian areas with overwhelming force. Used in Beirut and Gaza, it is understood to be a war crime.

The Israeli chief of staff who came up with the idea said explicitly that it was aimed at “harming the population” — the slaughter of civilians– so as to make Israel’s non-state opponents think twice about taking on Israel (yes, including with terrorist attacks).

“[This will] happen in every village from which shots were fired in the direction of Israel. We will wield disproportionate power against [them] and cause immense damage and destruction. From our perspective, these are military bases. […] This isn’t a suggestion. It’s a plan that has already been authorized. […] Harming the population is the only means of restraining Nasrallah.”

The column also leaves out Israel’s endless occupation and denial of equal rights to Palestinians as the sources of its woes/resistance. No, it endorses a doctrine that many liberal Zionists endorse today, managed conflict.

As one Israeli military officer on the Syrian-Israel border remarked to me, “We want to keep the temporary status quo forever, because everything else looks worse.”

As Donald Johnson reminds us, “Friedman is back to praising crazy behavior the way he praised Donald Rumsfeld during the Iraq War. It’s amazing that this garbage is in a so called liberal paper but I think maybe people are wrong to say liberal Zionist is an oxymoron. This is what a lot of liberals are like.  Chauvinist to the core.”

Israel’s “Silicon Wadi” — its vast network of high-tech companies along its coastal plain — has become a giant growth engine.

Friedman is not alone these days. Our mass media are trying to justify these methods as fit and right, with the neverending Ronen Bergman show, which also rationalizes collateral slaughter. Zionism truly is in crisis, and as Johnson notes, the hasbara is thick.

I’d point out that Nathan Englander’s new novel, Dinner at the Center of the Earth, contains real moral sense about Israel massacring civilians across international borders. He is more honest about the crisis the country faces.

Thanks to James North and Scott Roth.