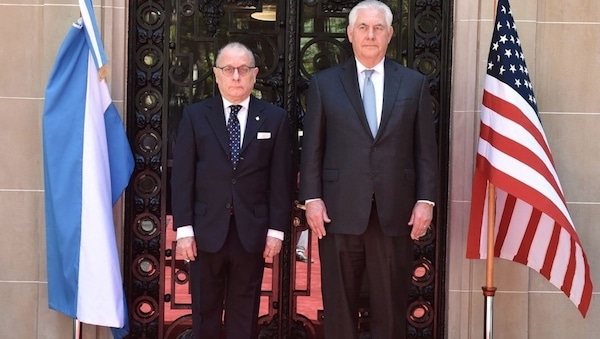 U.S. Secretary of State Rex Tillerson is threatening to ban the import and export of oil and crude products from Venezuela into the U.S. to pressure President Nicolas Maduro to “return to the constitution.”

“Obviously, sanctioning the oil or in effect prohibiting the oil to be sold in the United States, or for the United States as well to sell or provide oil to Venezuela, or refined products, is something we continue to consider,” Tillerson said during a joint press conference with his Argentine counterpart in Buenos Aires.

Argentine Foreign Minister Jorge Faurie voiced support for the secretary’s proposal, calling for “controlling the financing” of Venezuela as an “absolutely important” instrument to pressure the Maduro government as long as the sanctions “never harm the Venezuelan people”.

Venezuela continues to be the U.S.’s third-largest oil supplier. Approximately 60 percent of Venezuela’s gross domestic product (GDP) comes from crude and its extracts.

“One of the aspects of considering sanctioning oil is what effect would it have on the Venezuelan people? Is it a step that might bring this to an end more rapidly?”, Tillerson added, referring to the potential ouster of democratically elected Maduro.

Speaking during a Facebook Live broadcast on Sunday, Maduro fired back at the U.S. diplomat, calling on oil workers to mobilize against imperialism.

“[While] over there visiting Argentina, Rex Tillerson just threatened us with an oil embargo. We are prepared, Venezuela, workers of the oil industry, imperialism threatens us, we are ready to be free and no one is going to stop us,” he declared.

The U.S. has already placed sanctions on several high-ranking Caracas officials as well as a ban on financial dealings with the country and its state oil company, PDVSA.

The socialist incumbent was officially named his party’s candidate on Friday, the same day that Tillerson kick-started his week-long Latin American and Caribbean tour that began in Mexico.

In a prelude to the tour, the secretary of state made thinly veiled reference to U.S. support of a military coup in Venezuela to overturn the Maduro government at the University of Texas at Austin, last Thursday.

“In the history of Venezuela and South American countries, it is often times that the military is the agent of change when things are so bad and the leadership can no longer serve the people,” Tillerson told the university audience.

“The secretary of state, Tillerson, goes on a tour of five countries. What for? To conspire against President Maduro, against the Bolivarian revolution, against the people of Venezuela,” Maduro said in a rebuttal to Tillerson during the conference of the United Socialist Party of Venezuela (PSUV) on Friday.

“But imperialism … has turned out to be a paper tiger, and here we have a true and vigorous revolution,” the incumbent added.

The U.S. secretary of state will next head to Peru, then Colombia and ends his trip in Jamaica.