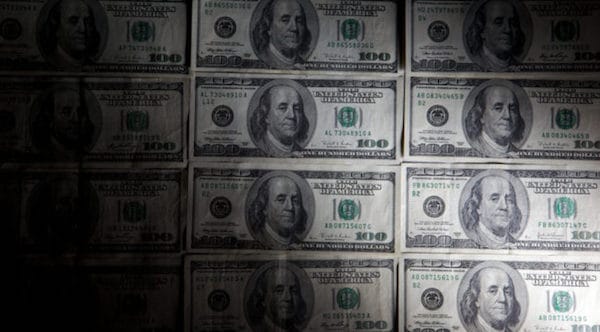 During her last news conference in December, Janet Yellen stood firm on her record stating, “The global economy is doing well. We’re in a synchronized expansion. This is the first time in many years that we’ve seen this.”

While attempting to lock in her record, Yellen urged, “There’s less to lose sleep about now than has been true for quite some time.”

Well, a lot of people lost sleep these past few days. And they might lose more sleep in the days to come.

Markets were due for a correction. Whether it turns out to be something worse, time will tell.

A recent article in MarketWatch said 2018 could “be the year the stock market rally screeches to a halt.” That’s because at some point debt bubbles are going to pop, and after they do, stocks will follow.

The Fed has continued to provide what I call dark money to big Wall Street banks while they continue to buy back their shares with it.

Dark money then flows out to the biggest Wall Street banks and financial institutions. Policy makers set the tone for central bank fabrication and movements of money through markets, banks and the world.

Because of dark money provided by central banks, corporations have been piling on debt like arsonists hoarding lighters before a fire. They’ve been using that debt either to service old debt or to buy their own stocks. That move artificially elevates their share values and in turn makes more bond investors relish buying their debt.

Apple, for example, has been one stalwart that’s been riding “the borrowing bandwagon as it looks to fund its massive share buyback program.” Apple went as far as to issue $12 billion of debt in the last four months of 2017 in order to buy its own stock.

The entire U.S. primary corporate bond, or debt, market has been at record levels. There was $1.44 trillion of investment-grade issuance in 2017 compared with $1.34 trillion in 2016. There was $266.3 billion of high-yield issuance last year, that sector’s fourth-biggest year.

This debt creation can’t sustain itself forever. It doesn’t take but a tiny mistake by central bankers to throw the bond markets into disarray.

Equity markets don’t always follow right away, but they will eventually follow. And these past few days, equities marched in lockstep with the spike in bond yields.

The Fed’s balance sheet reductions until now have basically been a rounding error. But last week, the Fed sold $22 billion of assets. Is it a coincidence that stocks sold off?

But this would just be a taste of what could happen.

As the MarketWatch article I mentioned says, “If and when the bubble does pop, however, the deleveraging by lenders could create a credit crunch the likes of which haven’t been seen since the Great Recession.”

Let’s briefly review how we got here…

After the 2007–08 financial crash, the Federal Reserve starting buying $3 trillion worth of U.S. Treasury and mortgage-backed bonds from banks and the market. This epic purchasing power manipulated prices, drove down bond yields and “provided an artificial boost to the stock market.”

That’s not free market economics. The artificial nature of this move should concern any investor. The Fed’s maneuvers have only grown from there.

All told, the Fed’s book of assets has quadrupled from $914.8 billion in late 2007 to $4.5 trillion in 2014. It did this through a bond-buying program dubbed quantitative easing (QE) and in stages called QE1, QE2 and QE3. Even now the size of its asset book is over $4.4 trillion.

The Fed, or any of the major central banks that took the same course, never had any real unwind strategies for this. While outgoing Fed Chair Janet Yellen may have given speeches about how the Fed will “normalize its balance sheet back to something resembling pre-crisis days,” she really did nothing about it. The Fed has been talking about this since 2011.

Right now, we’re looking at another five years or so before the Fed’s balance sheet would normalize under the current schedule. Finally, in October 2017 the Fed supposedly began to cut its bond buying program by “shrinking the amount of its maturing bonds that it will roll over into new bond purchases.”

But as I explained, it was mostly cosmetic until a more substantial reduction last week. The question now becomes whether or not Janet Yellen’s successor, Jerome Powell, will change course.

Don’t expect Powell’s policies to differ from Yellen’s. He also won’t change from her predecessor, Ben Bernanke, as his voting record shows us, aside from pressing for more leniency for Wall Street.

As the former number two man on the Federal Reserve Board of Directors, he has a record of pressing Congress to weaken the Volcker Rule provision of the Dodd-Frank Act. The Volcker Rule was a security measure meant to prevent banks from making risky bets using taxpayer money.

His stance dovetails with that of the Trump administration — specifically that of Treasury Secretary Steven Mnuchin, who endorsed him for the post. So Powell will be friendly to dark money creation.

While Powell may have once had some reservations about voting for the Fed’s quantitative easing (QE), or dark money creation, in the past — he ultimately voted for it.

Powell and the Fed board, under his leadership, will continue to watch for blips in the market or amongst banks. Any signs of distress, like we’re seeing now, implies more dark money will enter into the market. At the very least, I think they will hold off tapering of the Fed’s books (quantitative tightening) as promised last year.

As I revealed in my book, All the Presidents’ Bankers, the revolving door between Wall Street and Washington is very real. It is also one of the most powerful and influential aspects of government. Power and money have no real party allegiance.

See, no matter who sits in the White House, dark money calls the shots. Effective today, we have a new financial alchemist in Washington.

Don’t expect Trump to talk about his newest Dark Money Man at the Federal Reserve. By law, the Fed is supposed to be regulating Wall Street. What Trump brings to the halls of the Fed will, however, matter to us all.

A reservoir of dark money is waiting to flow into the places that offer opportunity and security. It will flow into the stock and bond markets if things get dicier. Look for a massive amount of central bank money to enter the market and infiltrate sectors like renewable energy, infrastructure and construction, blockchain innovations and cryptocurrency.

What all of this means is the more dark money entering the financial markets, the better the opportunity for investors.

While this bubble continues to grow it won’t last forever. It can’t.