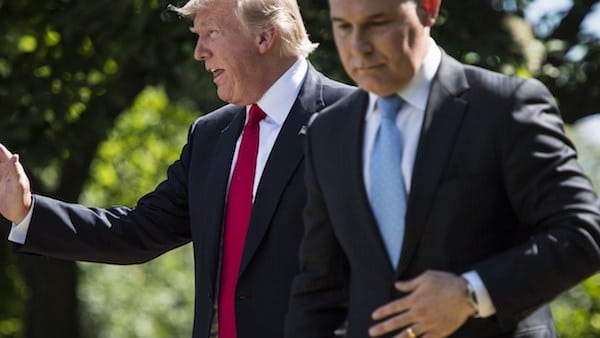 WASHINGTON, DC – JUNE 1: President Donald Trump and EPA Administrator Scott Pruitt speak about the US role in the Paris climate change accord in the Rose Garden at the White House in Washington, DC on Thursday, June 01, 2017. (Photo by Jabin Botsford/The Washington Post via Getty Images)

A federal court has denied the Trump administration’s last-ditch effort to prevent a landmark climate lawsuit from going to trial. It called the motion “entirely premature” and argued that the administration had failed to reach the “high bar” required for dismissal.

“There is enduring value in the orderly administration of litigation by the trial courts, free of needless appellate interference,” wrote Chief Judge for the Ninth Circuit Sidney Thomas, who rendered the decision alongside Judges Marsha Berzon and Michelle Friedland. “If appellate review could be invoked whenever a district court denied a motion to dismiss, we would be quickly overwhelmed with such requests, and the resolution of cases would be unnecessarily delayed.”

The case brought by 21 children and young adults against the federal government for its role in perpetuating climate change has been making its way through the court system since 2015. After a district court in Oregon ruled that the lawsuit could proceed to trial, the Trump administration tried to get it dismissed by the higher court.

In June of 2017, the administration filed what is known as a writ of mandamus, which argued that the Ninth Circuit should “end this clearly improper attempt to have the judiciary decide important questions of energy and environmental policy to the exclusion of the elected branches of government.”

The Ninth Circuit, however, disagreed — especially with the administration’s argument that the trial would place an undue burden on the defendants because of the massive amount of discovery likely associated with the process.

In its decision issued on Wednesday, the panel noted that “the district court has not issued a single discovery order, nor have the plaintiffs filed a single motion seeking to compel discovery,” and called the administration’s request for relief from future discovery “entirely premature.”

If the district court were to compel any kind of discovery that the defendants felt was inappropriate, the panel continued, the administration would be free to challenge that at a later date.

“The Ninth Circuit just gave us the green light for trial,” Julia Olson, co-counsel for the plaintiffs, said in a statement. “We will ask the District Court for a trial date in 2018 where we will put the federal government’s dangerous energy system and climate policies on trial for infringing the constitutional rights of young people.”

The lawsuit, first filed in August of 2015 against the Obama administration, has already survived numerous attempts at dismissal.

The plaintiff’s first victory came in April of 2016, when Federal District Court Magistrate Judge Thomas Coffin ruled against the federal government and fossil fuel company’s request to dismiss the case. Then, in November of 2016, U.S. Federal Judge Ann Aiken found that the plaintiffs had adequate standing — meaning they would be uniquely harmed by the consequences of climate change — to bring their lawsuit to trial.

That decision was appealed by the Trump administration, which was named as a defendant in the case in January 2017. Then, last June, Judge Aiken ruled against the administration’s appeal, and later set a trial date for February 5, 2018.

If the case proceeds to trial, it will be the first time that the federal government has faced allegations of violating Constitutional rights due to its climate policies.

The lawsuit is based on a novel legal theory known as atmospheric trust litigation, which takes the doctrine of the public trust — the idea that governments are responsible for holding certain common elements like shorelines or rivers in trust for public use — and applies it to the atmosphere.

“The question of the last few years has not been ‘do we have a case’ but rather ‘how far will the federal government go to prevent justice’,” Kiran Oommen, a 21-year-old plaintiff in the case, said in a statement. “We have seen that they are willing to go to many lengths to cover up their crimes and maintain the status quo, but not even the Trump administration can go far enough to escape the inevitable tide of social progress.”