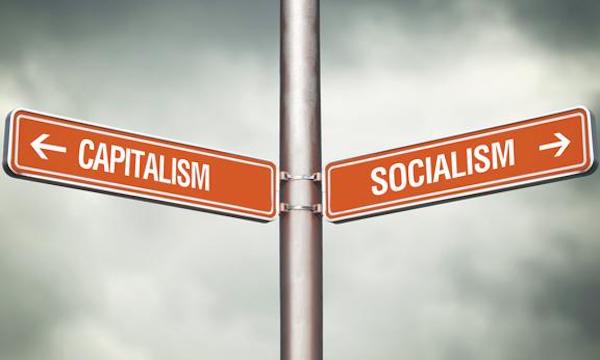 What the hell is socialism, anyway? Over the last decade, it has been one of the most frequently looked up words in the Merriam-Webster dictionary. And it’s easy to see why so many people feel the need for clarification.

Right wing politicians and commentators call anything they are against “socialist”. Federal finance minister Mathias Cormann last year described Australian Labor Party policies as “socialist, absolutely”. U.S. National Rifle Association CEO Wayne LaPierre recently warned that “socialism is a movement that loves a smear” and that the backlash against mass shootings in the U.S. was freedom-hating totalitarianism in disguise. And last month, in a speech to a £15,000-a-table Conservative Party function, British prime minister Theresa May vowed to “defeat socialism”.

The left is often vague about the term’s meaning as well. We hear about Scandinavian countries being socialist, about U.S. senator Bernie Sanders’ “democratic socialism”, about British Labour Party leader Jeremy Corbyn reviving socialism in the UK.

The one thing obvious in this is that socialism is a catch-all word for, or a label used to dismiss, policies that would make society more equal. And while that’s a good starting point – socialism is about equality – it only gets us so far.

To understand what Marxists mean by socialism, you first have to understand not just that we are against certain things – inequality, wage cuts, anti-union laws, oppression based on class, race, gender or sexual orientation, imperialist war and so on – but how we see the connections between and underlying causes of those things.

For example, you don’t have to be a socialist to be against racism. Socialist are opposed to racism, but so are many others: anarchists, small “l” liberals, environmentalists, people who don’t consider themselves political. But different people, and different political currents, have different ideas about why racism exists and what function it serves.

Some say it is a product of ignorance, so to do away with it we just need to educate people. Others say it exists to benefit all white people – from multi-millionaires in boardrooms to poverty-stricken families skipping meals to pay their rent – and that it can’t be eradicated until all whites acknowledge and renounce their inherent “privilege”. Similar arguments are made about sexism and homophobia.

Or take inequality. Some people say that it’s due to the insatiable greed of those at the top of society, so we just need governments to enforce limits on it. Others, using a secular version of original sin, insist that all humans are naturally selfish, so nothing can be done. Others preach charity, believing that the wealthy can be convinced by example to give up much of what they have to help out those at the bottom.

So what marks out our socialist politics?

First, we argue that, no matter what the problem – war, inequality, oppression, climate change – at its root is our world being organised around the principles of private property, competition and profit maximisation. When we say private property, we’re not talking about people owning their own phone, car or collection of books. We’re talking about the property required to make the world function: factories, mines, telecommunications infrastructure, office buildings, arable land and so on. That sort of property is concentrated in the hands of a small minority of people – capitalists or bosses – who own and oversee the big companies.

For example, in Australia, the Department of Industry estimates that the 4,000 largest firms account for 44 percent of industrial growth and 95 percent of exports. These big businesses determine how natural resources are used, who gets work and where, which things are produced and how they are distributed. Their decisions are the greatest determinant of how the rest of us live.

Because all the companies compete against each other, they have to maximise profits. That means screwing over workers, ruining the environment and churning out products designed to fall apart or break down so that customers continue buying new things. This isn’t a product of innate human greed. The people at the top may be greedy, but their greed is the product of society being structured this way, not its cause.

And because we are many and those at the top are few, they devise systems of control to keep us oppressed and divided. That can involve straight-out violence, using the police and the prison system, or even the army, to quell resistance. In places such as Australia, it more often involves holding particular groups down and playing people off against each other – the age-old strategy of divide and conquer.

That can be seen in various ways today. There’s the anti-Muslim bigotry spewed out by the press, the appalling treatment of Aboriginal people, the gender discrimination and grossly sexist stereotypes in film and on almost every advertising board in shopping centres.

Then there’s the ongoing creation of a user-pays society: privatising essential services, underfunding public education and health and so on. Some of this is about private companies making profits. But it’s also about creating a world in which people feel they must rely on themselves and their families to get by, which adds to the idea that life is one giant competition, and that if you don’t look after your own self-interest, you will be left to rot.

All these things turn people against each other in various ways, leaving the capitalists to continue making money while homelessness, poverty and inequality remain or increase.

So wherever you look, the capitalists with one hand are destroying things and ripping us off, and with the other are holding us down and making us blame each other for the problems they create.

The second thing that marks out our politics is a focus on working class people’s collective action. The working class is basically anyone who works for a wage, owns no business and isn’t a manager. That’s 70-80 percent of the working population in most advanced, industrialised countries. We argue that the working class is the only group with both an interest in and the power to transform society.

It has an interest, because it is exploited and also because it is oppressed. Workers lack almost all control when at work: we’re told what to do, what to wear, when to turn up and when to go home, when we can eat, how we can and can’t talk etc. The things we produce don’t belong to us, and we get no say over how they are produced or the purpose they will serve.

We get home, our lack of control is reinforced: turn on the news and watch reports of the world-defining decisions that were made while we were doing whatever the hell it was that we’d rather not have been doing.

Working people have an interest in uniting to get a better deal, because as individuals, we have no power in the face of the capitalists. But workers have collective power. That’s why we have trade unions, to get at least some influence over our pay and conditions of work.

And the essential tasks of society are performed by workers; the bosses are dependent, unable to make a profit or to get table service when workers collectively go on strike, i.e. stop working. This is the most powerful weapon of workers – no other social force can paralyse a city, or an entire country, in the way workers can.

We hear a lot today about minorities and people of different identities having shared interests as groups – so we have the LGBTI community, the women’s movement and so on. There obviously are things for individual groups to unite around, and socialists support those. Socialist Alternative, the group behind Red Flag, was at the forefront of fighting for marriage equality, for example, and we understand that racism and sexism affect all people in a particular group, be they workers or bosses.

But we also acknowledge the limits of identity. For example, while all women endure sexism and misogyny, there nevertheless is no fundamental basis on which all women can unite. Women in the capitalist class have an interest in perpetuating the oppression and exploitation of working class women – they cannot maintain their economic privilege otherwise. When working class women fight back collectively, they find their natural ally in working class men, even the sexist ones, while their “sisters” in the establishment generally turn against them.

Note, for example, that in the Democratic Party primary contest between Bernie Sanders and Hillary Clinton, it was the capitalist feminist, Clinton, who opposed raising the U.S. federal minimum wage to $15 an hour, even though the biggest beneficiaries of such a raise would have been women.

It’s important to see that the working class is the most diverse force on the planet. It is male and female, black and white, gay and straight, Muslim, Buddhist, Christian and atheist. It speaks all languages. This diversity is a source of immense strength, because it means that when workers stand together, all the divisions that the capitalists sow are capable of being overcome in common cause.

The third thing that marks out our socialist politics is an understanding that capitalism has to be abolished, not just tinkered with. Marxists argue that, otherwise, socialism is a utopian pipe dream. That might sound counter-intuitive. Isn’t it more realistic to use the existing parliament to legislate for things like a living wage for all people, the (re)nationalisation of utilities such as electricity and water, free health and education etc? Isn’t that basically socialism?

The short answer is no. On one hand, while some gains are possible, even when we win things such as decent wages or health care, the capitalist system ultimately erodes them. You can see that today in the relentless attacks around the globe on social welfare as capitalists compete on the world market, holding living standards down to prop up their profits.

And when governments try to change things, the capitalists invariably fight back – they do everything they can, including sacking or overthrowing governments, and up to unleashing the force of the military on the civilian population, to stop genuine social advance.

Human creativity and freedom are developed only in momentous circumstances that involve and challenge the people themselves. Workers are not angels. Every one of us is scarred by the world as it is – internalising or accepting prevailing prejudices and narrow world views, and limited in our lives to menial tasks that stunt our ingenuity and wear down our spirit.

To overcome the capitalist class and to transform not only the world, but ourselves, we need a revolution. As Karl Marx wrote:

“Both for the production on a mass scale of this [new collective] consciousness, and for the success of the [socialist] cause itself, the alteration of [people] on a mass scale is necessary, an alteration which can only take place in a practical movement, a revolution; this revolution is necessary, therefore, not only because the ruling class cannot be overthrown in any other way, but also because the class overthrowing it can only in a revolution succeed in ridding itself of all the muck of ages and become fitted to found society anew.”

Ultimately, this is what we mean by socialism. It’s not “nicer capitalism”; it’s a new system run by workers, who put society’s resources under democratic control and produce goods and services for human need, rather than profit, ending the domination of a minority over the majority.