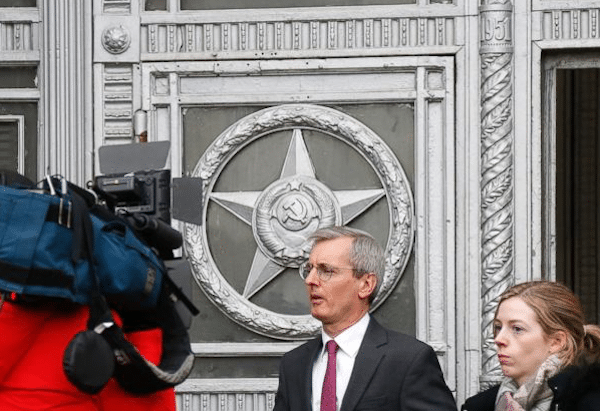 Several questions remain unanswered: Why did Russia order such a crime only days before its elections? Why did Russia use a poison easily traceable to itself? Why isn’t Britain providing samples of the poison to Russian authorities?

In little over a week since the mysterious poisoning of former Russian intelligence agent and British spy Sergei Skripal and his daughter Yulia in Salisbury, Britain, on March 4, a campaign has emerged in ruling circles of the NATO alliance to pin blame for the poisoning on Moscow. Backed by top officials in Washington and in Europe, the British government is using this poisoning to concoct accusations against Russia with the most far-reaching implications.

On Monday, Prime Minister Theresa May issued an ultimatum, which expired at midnight today, declaring that absent a “credible response” from Moscow, her government will conclude there has been “an unlawful use of force by the Russian State against the United Kingdom.” During the parliamentary debate May was urged to invoke Article 4 of the NATO treaty, forcing the alliance to confer if the “territorial integrity, political independence or security of any [NATO member state] is threatened.”

These are issues over which states go to war, and top NATO officials are clearly putting together a case for war with Russia, a major nuclear-armed power. Yesterday, as May prepared to return to Parliament today with proposals for action, reports emerged in international media that ruling circles in London are discussing also invoking Article 5 of the NATO treaty. This article compels all NATO countries to “assist” any NATO member state that says it has been attacked to take “such action as it deems necessary, including the use of armed force.”

Faced with such drastic threats raising the danger of nuclear war, one must ask: what is the basis of the allegations that it was Moscow that poisoned Skripal and his daughter, who are now very ill?

The World Socialist Web Site holds no brief for the kleptocratic business oligarchy that emerged in Russia from the Stalinist bureaucracy’s restoration of capitalism in the Soviet Union in 1991. It cannot be ruled out that a faction of Russian intelligence, acting with or without the knowledge of President Vladimir Putin, may have poisoned Skripal.

But London and NATO have neither produced physical evidence of Kremlin involvement, nor established a motive for a hypothetical Russian attack. Nor has London explained why, if the Kremlin wanted Skripal dead because he spied for Britain in the 1990s and early 2000s, it did not execute him after convicting him of spying in 2006, and instead sent him to Britain four years later in exchange for Russian spies jailed by London.

Instead, a simplistic narrative accusing Moscow has emerged: If a crime appears to target countries or individuals hostile to the Russian government, NATO governments and media conclude within hours that it is self-evident that the Kremlin is responsible.

In fact, in international politics, the simple and obvious answer all but inevitably fails to reveal the complex web of political and economic interests that produce a given event or policy. Were the Skripal attack to be a Le Carré spy novel, the accusations so far would likely take up the first 10 pages of the book, after which the real story would unfold over the next 400 pages. The questions that must be posed in such cases are: what is the credibility of the accuser, and, above all, cui bono (who benefits from the crime)?

To those who say it is obvious that Russia poisoned Skripal, it is worth recalling the 2001 anthrax attacks in the United States, in which a deadly strain of anthrax was mailed to many U.S. officials in Washington, killing 5 people and infecting 17 more, shortly after the September 11 attacks. There again, media immediately blamed the attacks on obvious targets of U.S.-UK war threats—the Iraqi regime’s weapons of mass destruction (WMD) program and its alleged ties to Al Qaeda. These all proved to be lies, serving Washington’s foreign policy interests as it sought to go to war in Iraq.

And, after the U.S. invaded and occupied Iraq, as it became clear that Iraq had no WMDs and was not responsible for the attacks, it emerged that the particular anthrax strain used in the attacks had in fact been created by Washington’s own WMD program at Fort Detrick, Maryland. A U.S. scientist, Steven Hatfill, was rumored to be responsible, investigated, and ultimately cleared.

It still remains unclear to this day which U.S. officials were involved in carrying out the anthrax attacks. The FBI closed the investigation in 2010 after pinning the blame on another scientist, Bruce Edwards Ivins, who had committed suicide in 2008. However, the U.S. National Academy of Sciences found in 2011 that the U.S. government did not have sufficient scientific evidence to definitively assert that the anthrax used in the attacks came from Ivins.

In the Skripal attack, it is unclear how Moscow would benefit. The attack took place shortly before this weekend’s elections in Russia, and as the NATO powers ramp up a confrontation with Russia over their failed war for regime change in Syria that has seen U.S. forces attack and kill Russian military contractors in Syria in recent weeks. Rather, the Skripal attack hands Putin’s enemies inside NATO an ideal diplomatic and political weapon to use against him.

The benefits flow, rather, to sections of the British and European ruling class who are stoking war hysteria against Russia, and sections of the American ruling elite, particularly around the CIA and the Democratic Party, working with them to discredit Trump as a supposed agent of Russia. The Skripal attack allows these factions to place enormous pressure on rival sections of the European ruling class, notably in the French and German governments, who are calling for a European military policy independent from the United States and closer ties to Russia.

Thus, on Monday, former French President François Hollande issued a sharp if barely veiled attack in Le Monde on his successor, Emmanuel Macron, who is working closely with Berlin. Asserting that current NATO policy allows Moscow and the Syrian government to “liquidate its opposition and massacre its own people,” Hollande called for a confrontation with Moscow: “Russia has been rearming for several years, and if Russia is threatening, it must be threatened.”

Yesterday, U.S. Secretary of State Rex Tillerson said the United States has “full confidence” in the British assessment of the attack—a statement he implicitly contradicted by then declaring that Russia was only “likely responsible.” Despite firing Tillerson shortly after he made those statements, Trump echoed Tillerson’s accusation of Russian complicity, declaring, “It sounds to me like it would be Russia, based on all the evidence they have.”

Under these conditions, and after the experience of the anthrax attacks, it must be said that factions of the British and American states themselves are prime suspects in the Skripal attack.

London has based its allegations against Russia entirely on the shifting analyses of its Porton Down biochemical warfare facility, located coincidentally only 10 miles from Salisbury. Initially, London alleged that Skripal had been exposed to fentanyl, a synthetic opioid more powerful than heroin. On March 7, however, British officials alleged that the poison was a nerve gas like sarin or VX, without explaining why Porton Down, a facility that has for decades specialized in producing nerve gases, failed to correctly identify one after it was used.

On Monday, May alleged that the nerve gas in question is in fact “novichok,” a special chemical weapon initially produced by the Soviet government. However, London has refused Moscow’s requests to actually provide it with samples of the substance used in the Salisbury attack for analysis, as required by the Chemical Weapons Convention (CWC). As of now, at least, the case against Russia is based on the say-so of the Porton Down facility.

Porton Down is not a reliable source, however. It has a long record of illegal or covert testing of biological and chemical weapons on British citizens. These include the 1942 contamination with anthrax spores of Gruinard Island, which the British government was compelled to decontaminate in 1986; the unlawful death of Ronald Maddison in 1953 during trials of sarin gas on British servicemen; and the 1963-1975 spraying of biological weapons in Lyme Bay. The British government paid out 3 millions pounds to victims of such tests in 2008, without admitting liability.

None of the allegations directed by such sources against Russia on the still-murky Skripal poisoning case have a shred of credibility. Only a full, objective international public inquiry, whose findings are published in real time as the inquiry progresses, can establish the truth of what took place. In the meantime, it is a critical measure of self-preservation for workers in America, Europe and around the world to oppose the ruling elite’s stoking of war hysteria against Russia and the danger of an all-out confrontation between the world’s main nuclear-armed powers.