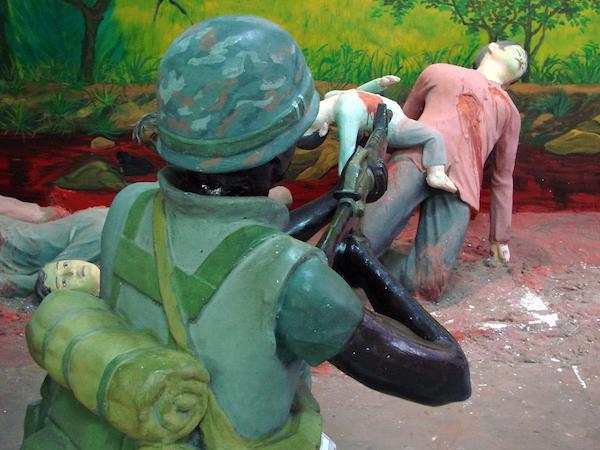 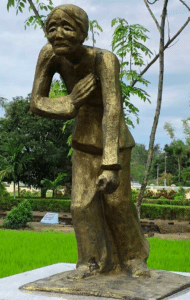 On March 16, 2018, the same day I was with a delegation from Veterans for Peace at the 50th annual ceremonies commemorating the deaths of 504 civilians who were murdered by U.S. Army soldiers over a period of four hours on March 16, 1968, in the hamlet of My Lai, Viet Nam and surrounding villages, President Donald Trump nominated Gina Haspel to be the new CIA Director.

That day therefore became a day of remembering murder and torture committed by members of the U.S. government a half-century ago—and much more recently in 2002.

We know what the U.S. Army soldiers did 50 years ago. In what is now called the My Lai massacre, U.S. soldiers executed 182 women including 17 pregnant women and raped many of them before they were killed. They murdered 173 children, 68 of whom were five years old or younger and they executed 89 middle aged persons and 60 persons over the age of 60, some of whom were burned alive, tortured, gang-raped, scalped and had their tongues cut out during the rampage of the U.S. Army soldiers.

And we now know that Gina Haspel, President Trump’s nominee for CIA director was the CIA senior officer in charge of a secret CIA prison in Thailand in 2002 in which prisoners were tortured – waterboarded (one person 82 times), kept in dog cages for weeks at a time, put into coffin boxes with things they were afraid of.  To cover up her crimes, she ordered the destruction of the videotapes of the torture that happened in her prison.

Fifty years ago, the U.S. Army chain of command covered up the My Lai massacre and attempted to malign those who made the massacre public. Army veteran Ron Ridenhour described what had happened in letters to the Secretary of Defense, Chairman of the Joint Chiefs, and others.

Helicopter pilot Hugh Thompson testified before Congress that he saw U.S. Army personnel killing Vietnamese civilians and landed his helicopter near the killing fields to end the rampage. He was told by the platoon leader Lieutenant William Calley to butt out, but instead Thompson picked up civilians running from the carnage and flew them to safety.

After several years of investigation, out of 26 men initially charged, Calley was the only person court-martialed and found guilty – of killing 22 villagers, and given a life sentence, but served only three and a half years under house arrest at Fort Bragg, NC and never spent one day in jail. President Nixon ultimately pardoned Calley.

Forty years later, in 2007, CIA whistleblower Jon Kiriakou revealed to the world that the CIA was waterboarding prisoners in secret and not-so-secret prisons in many parts of the world.

Kiriakou was imprisoned for almost two years for revealing that the CIA was torturing persons but none of those – including CIA director nominee Gina Haspel – who made torture a policy of the CIA or actually committed the acts of torture, including waterboarding, were ever charged with a crime.

The protection of those who commit heinous crimes in the name of the U.S. government (by the government in whose name the crimes are committed) provides a dangerous precedent and could lead to the conclusion by many in the military and CIA that they can “get away with murder.”

The sad history of our country is that murders and executions (remember the extrajudicial drone assassinations ordered by Presidents Bush, Obama and Trump) are acts that continue to be the policy of our country. These acts are known throughout the world, but seldom spoken about in the United States. That President Trump would nominate a known torturer to be the director of the CIA is horrific. Her confirmation by the U.S. Congress would be a tragedy.

For what little credibility the U.S. left in the world, the Congress must refuse to confirm a known torturer as director of the CIA.

Ann Wright was in the U.S. Army/Army Reserves for 29 years and retired as a Colonel.  She was also a U.S. diplomat for 16 years and served in U.S. Embassies in Nicaragua, Grenada, Somalia, Uzbekistan, Kyrgyzstan, Sierra Leone, Micronesia, Afghanistan and Mongolia.  She resigned from the U.S. government in March 2003 in opposition to Bush’s war on Iraq and since then has been very active in anti-war and social justice issues.  She is the co-author of “Dissent: Voices of Conscience.”